You are the owner of this article.
Edit Article Add New Article
You have permission to edit this article.
Edit
News
COVID-19
Opinion
Sports
Obituaries
Religion
Entertainment
Announcements
Submissions
Contests
Classifieds
1 of 7 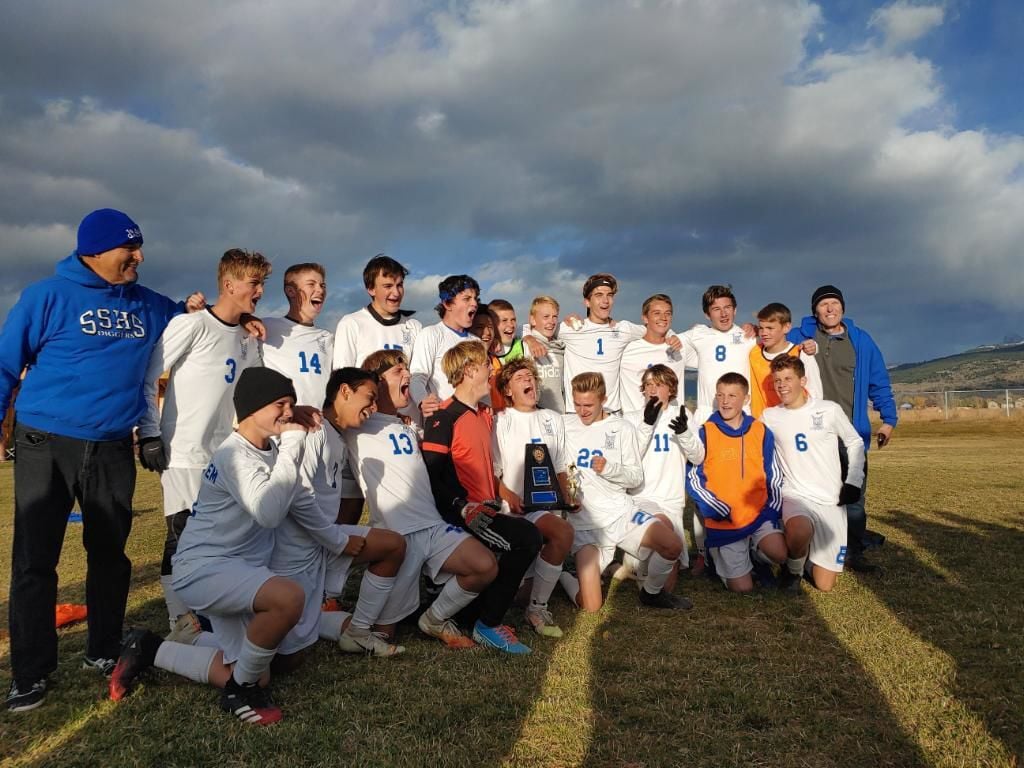 Sugar-Salem’s boys soccer pose for a photo with their fourth-straight district championship trophy. 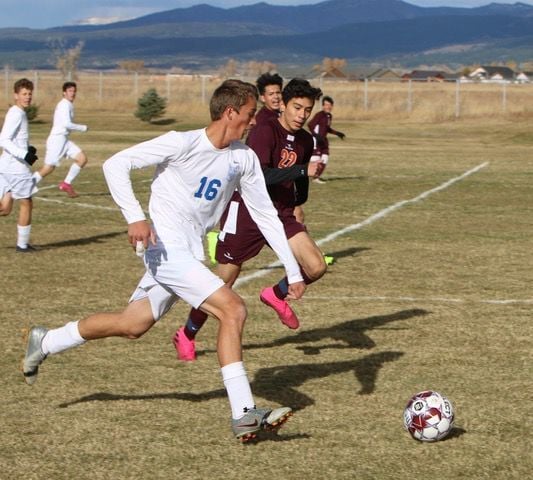 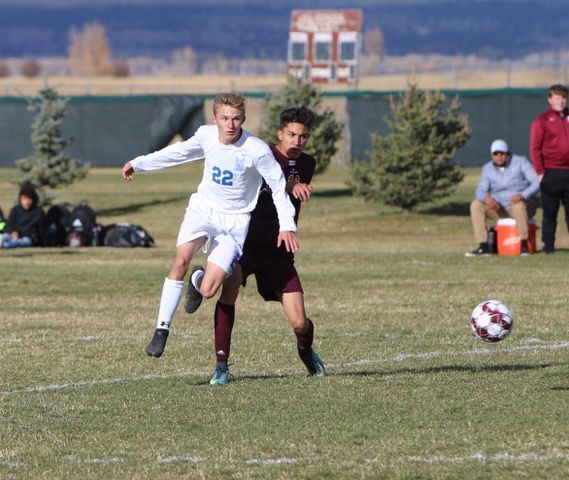 Sugar-Salem’s Kyle Brunson leaps past a Teton defender to control the ball. 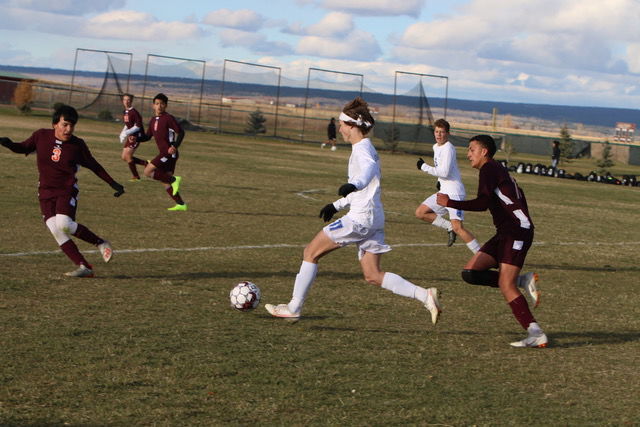 Sugar-Salem’s Devin Petterson Brings the ball up for a shot. Petterson scored the Diggers one goal. 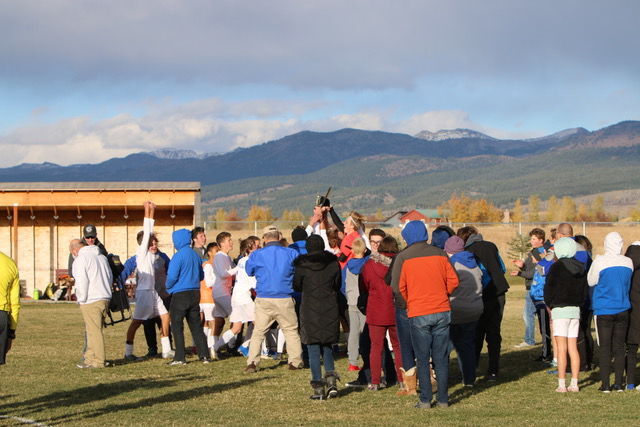 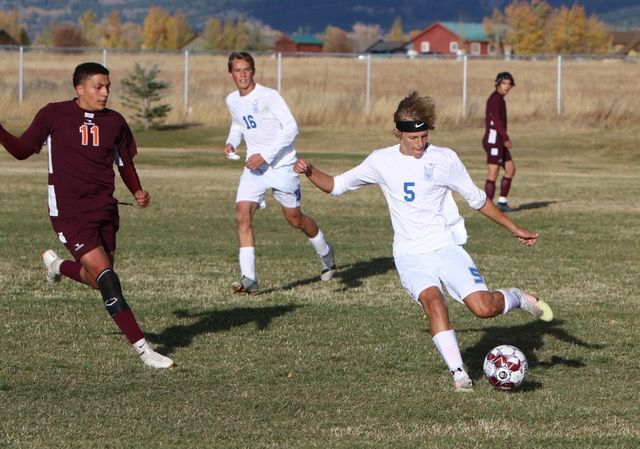 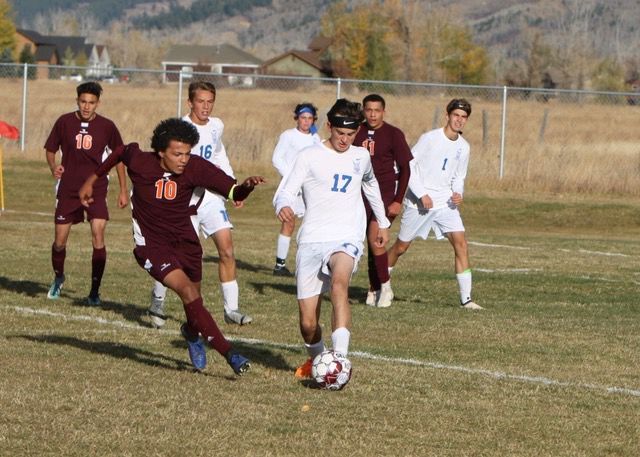 Sugar-Salem’s boys soccer pose for a photo with their fourth-straight district championship trophy.

Sugar-Salem’s Kyle Brunson leaps past a Teton defender to control the ball.

Sugar-Salem’s Devin Petterson Brings the ball up for a shot. Petterson scored the Diggers one goal.

The four seniors on Sugar-Salem’s boys’ team don’t know what it’s like not to win the district championship. They won their fourth straight title Wednesday winning 1-0 over Teton in Driggs after falling 2-1 to Teton in their game with the Timberwolves last week.

Devin Petterson hit the Diggers’ goal halfway through the first half on a header off of a corner kick after a Teton player missed clearing the ball.

“Then it was just a battle,” said Sugar-Salem coach Glenn Dayley. “We had the wind the first half. We were hoping to get a couple of goals because the wind was going pretty good.”

Both teams fought for possession in a 0-0 second half.

“We were trying to hang on and they were trying to get one,” Dayley said. “We were just doing a lot on defense and clearing the ball. We had a couple of good opportunities but never could quite finish. They had a couple of decent chances. They started shooting from far out so we were able to keep them from getting one in close.”

One defensive strategy Sugar employed to stop Teton was double and triple teaming the ball. In fact, Landon Bingham’s entire defensive assignment was to help out on the ball. Those double teams led to 5 or 6 steals in each half.

Both teams ended the game exhausted.

“I was screaming my head off at the end of the game trying to keep everyone running because they were so tired,” Dayley said. “The boys really rose to the occasion an upped their energy.”

The Diggers are hoping their experience in playing three straight days to the north earlier this season will prepare them for three straight days at state. Sugar has a young team offensively but they’re excited to see what their four seniors can lead them to.

“We’re just going to give it another shot,” Dayley said. “We keep getting there but we never quite bring home the big trophy. We love getting there and playing but we would love to bring that state championship trophy home. I think these boys are just happy to ride this bus as long as it keeps driving.”

Sugar-Salem’s girls team fell 1-0 in a windy game in Driggs against Teton.

The Timberwolves scored their goal with about 15 minutes left in the game.

Sugar had the wind at their backs in the first half and, despite double digit shots on goal, they weren’t able to connect the ball with the net.

“We created a lot of really good chances and their keeper made a couple of really good saves and we just weren’t quite able to put them in,” said Sugar-Salem head coach Scott Terry.

Terry said the Timberwolves had maybe three shots on goal. The Diggers had at least that many just in the second half despite going against the wind.

“Honestly, our defense played good the entire game,” Terry said. “They only had the one good chance and they put it away. Unfortunately, that’s just soccer sometimes.”

Despite the Diggers sweeping Teton in the regular season, the winner-take-all district title was held at the Timberwolves’ home where both weather and crowd play a role.

“Teton’s a tough place to play,” Terry said. “When you think about it from a neutral standpoint, it’s tough to beat a team three times. When you’ve already beat them twice and you have to go to their field and beat them in the game that actually matters the most — it doesn’t really seem like a fair thing to do. But it’s the way the system is and we just have to do the best we can.”

The Diggers will play American Falls in a state play-in game Saturday in Blackfoot. Sugar played American Falls in August and September winning 6-1 and 7-1. American Falls has played well in stretches this season including tying 11-3-1 Marsh Valley, one of only three teams to beat Sugar-Salem.