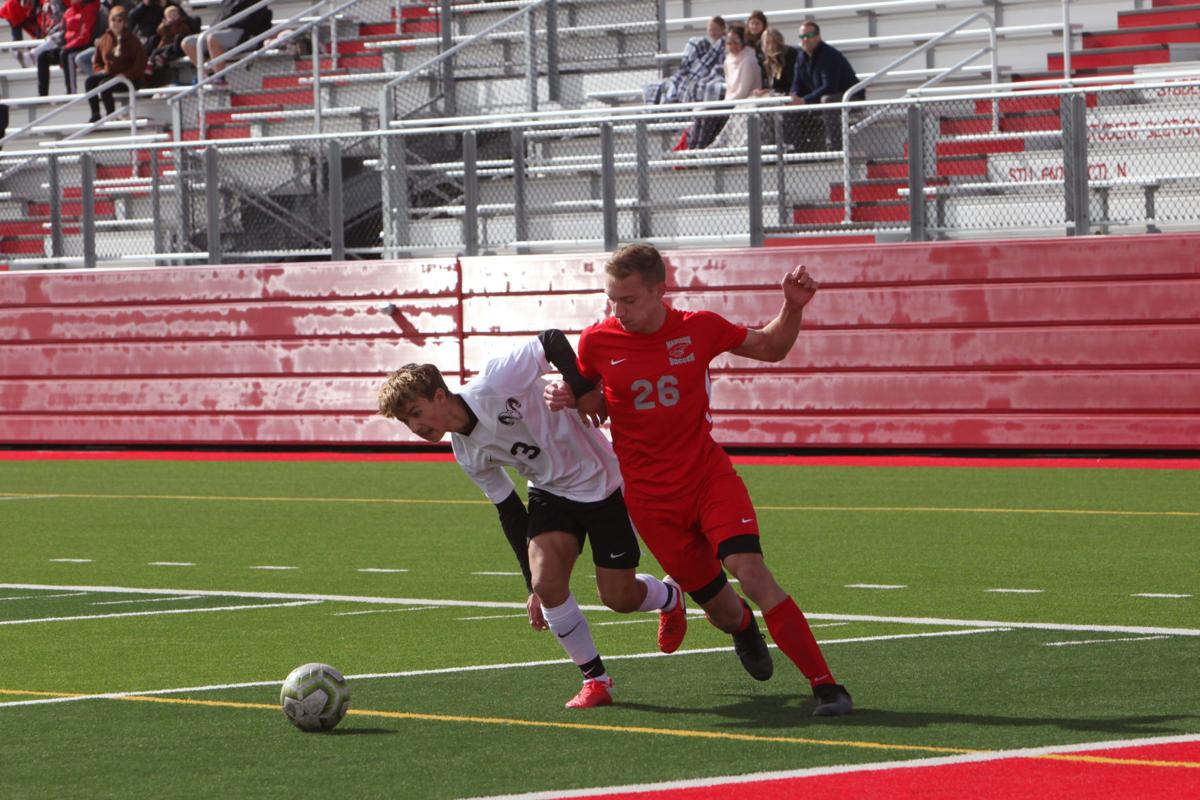 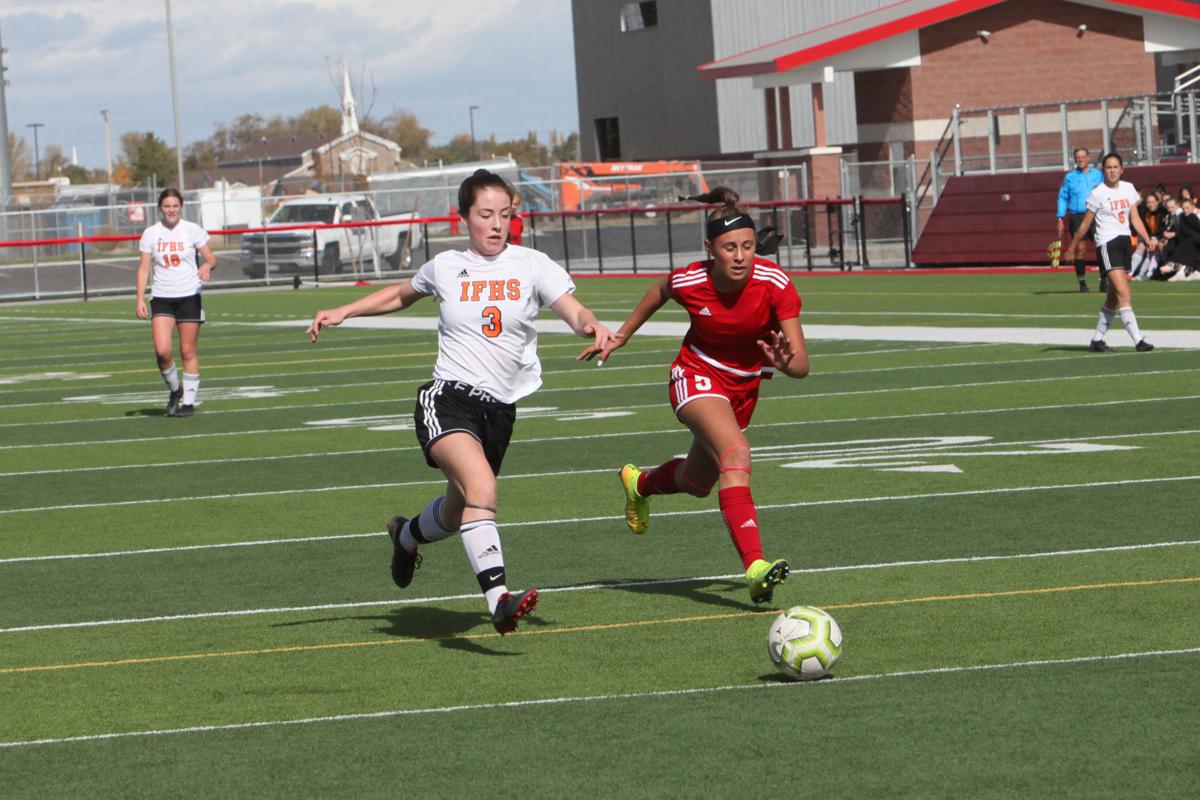 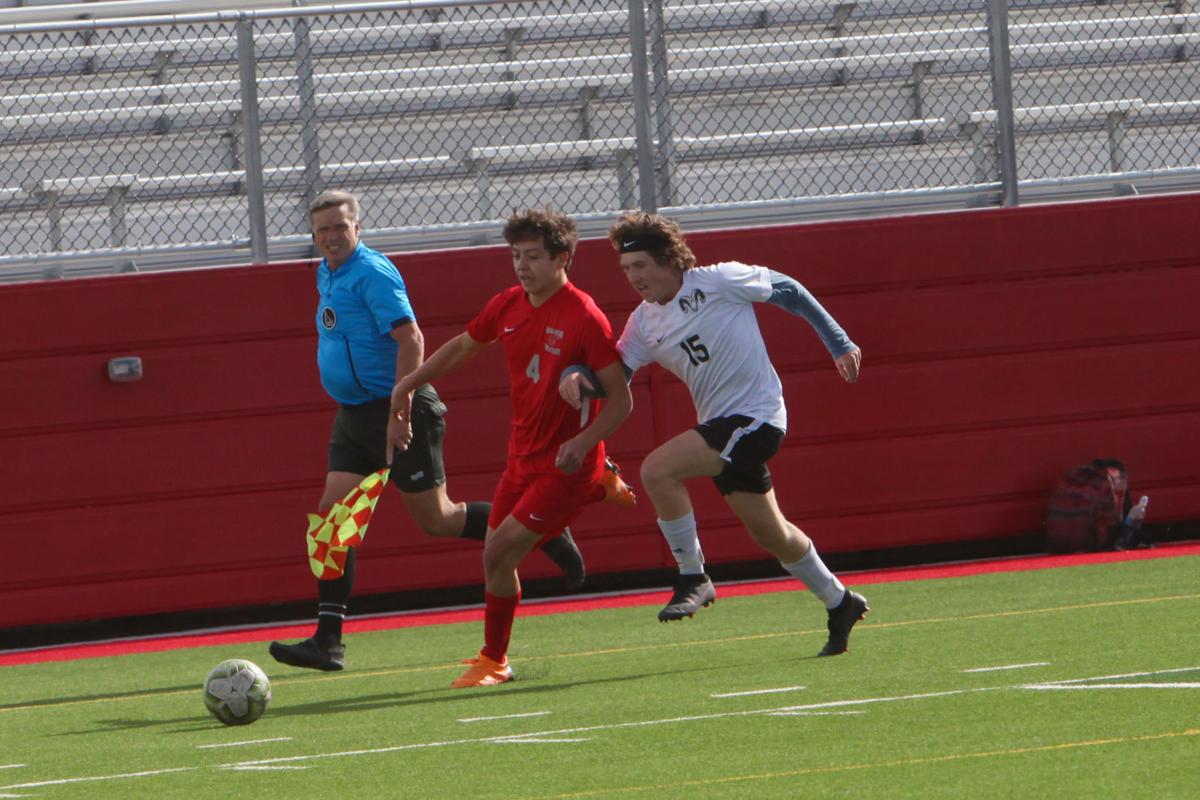 Madison’s Benitez fights through a Highland defender’s hook as he runs down the ball.

Madison’s Benitez fights through a Highland defender’s hook as he runs down the ball.

Madison’s boys soccer team is headed to state after taking out Highland 3-1 Saturday. Though the game was tied for most of the first half and a good portion of the second, it was never terribly close.

Highland “parked the bus” to slow down Madison’s high-powered offense, meaning the Rams played with all 11 men behind the ball throughout the game.

“We had to try and break it down,” Madison head coach Dan Dummar said. “It took a while.”

Nate Dummar scored the first goal to put the Bobcats up 1-0, then Madison scored on its own goal to even the score.

“We scored on ourselves accidentally,” Dummar said. “It took a lot of wind out of our sales.”

Madison won the coin toss at the beginning of the game and elected to go against the wind. In the second half, playing with the wind helped spark the Bobcat offense.

Cade Chandler broke the tie in the second with a little under 19 minutes to go. He stood up his defender, got free on the far wing and kicked the ball across the goal and into the other side of the net, giving Madison a 2-1 lead.

Mikey Fisher scored the next goal at the 13:33 mark of the second half putting in a ball from the other side of the goal to make it 3-1.

“We know them fairly well,” Dummar said. “I assume they’re going to be a good team. They generally are. It’s super hard with COVID this year. All the team’s are up and down because they’re missing players. They win and then they lose. It’s really been interesting, but I think Eagle will be a good game for us.”

“I think that we’re better and I think that we plan on doing better than we did last year,” Dummar said. “Last year we took third. This year, we’re going to try and take it. Winning in district is nice — but the ultimate goal is a state championship.”

Madison’s girls team is also headed to state after shutting out Idaho Falls to win 1-0. This will be the Bobcats’ fifth-straight year competing in the state tournament.

With the wind against it in the first half, Madison deployed a defensive strategy.

“Our goal was just to keep them out of the goal for the first half,” Madison head coach Jaymon Birch said. “Our defense played really well. I was really proud of them.”

With the wind at her back, Abby Anderson chipped in the lone goal of the game after Eva set the ball on a platter with a beautiful cross.

Coming off a district title and a dominating season, Madison lost in the first round of last year’s state tournament. This season’s tournament run won’t come with the same expectations.

“There’s some girls who have been there before but we also have some young girls,” Birch said. “With such a strong senior class last year, there are a lot of girls who have never played in a district championship or at state. It will be a good learning experience. Anything can happen in one game. That’s the beauty of state.”

Madison will play reigning champion Rocky Mountain in the first round of the state playoffs. It likely won’t be an easy game for the Bobcats.

“[I know] enough to know they’re going to be really tough,” Birch said. “They have a number of players who are division-one commits. That’s going to be a tough matchup. That’s the beauty of state though, you go play and you do as good as you can.”