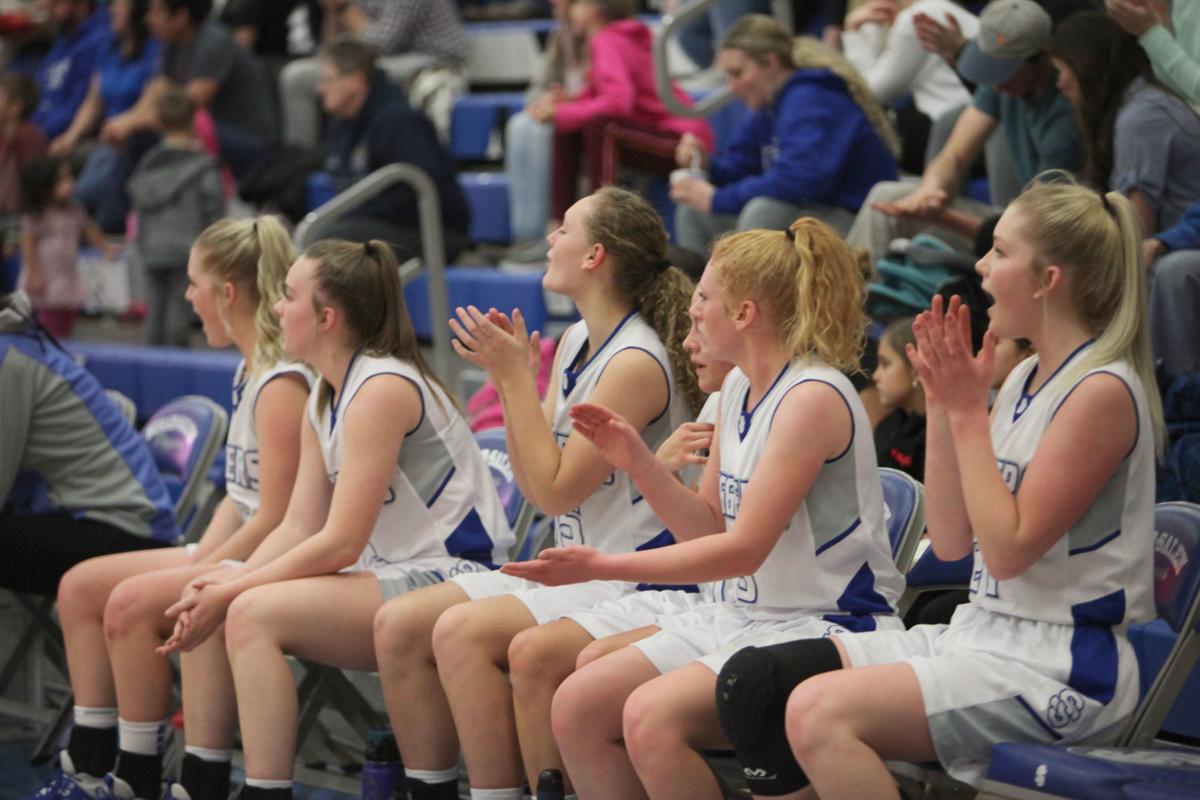 Sugar-Salem players cheer from the bench during a Dec. 8 game versus Snake River. 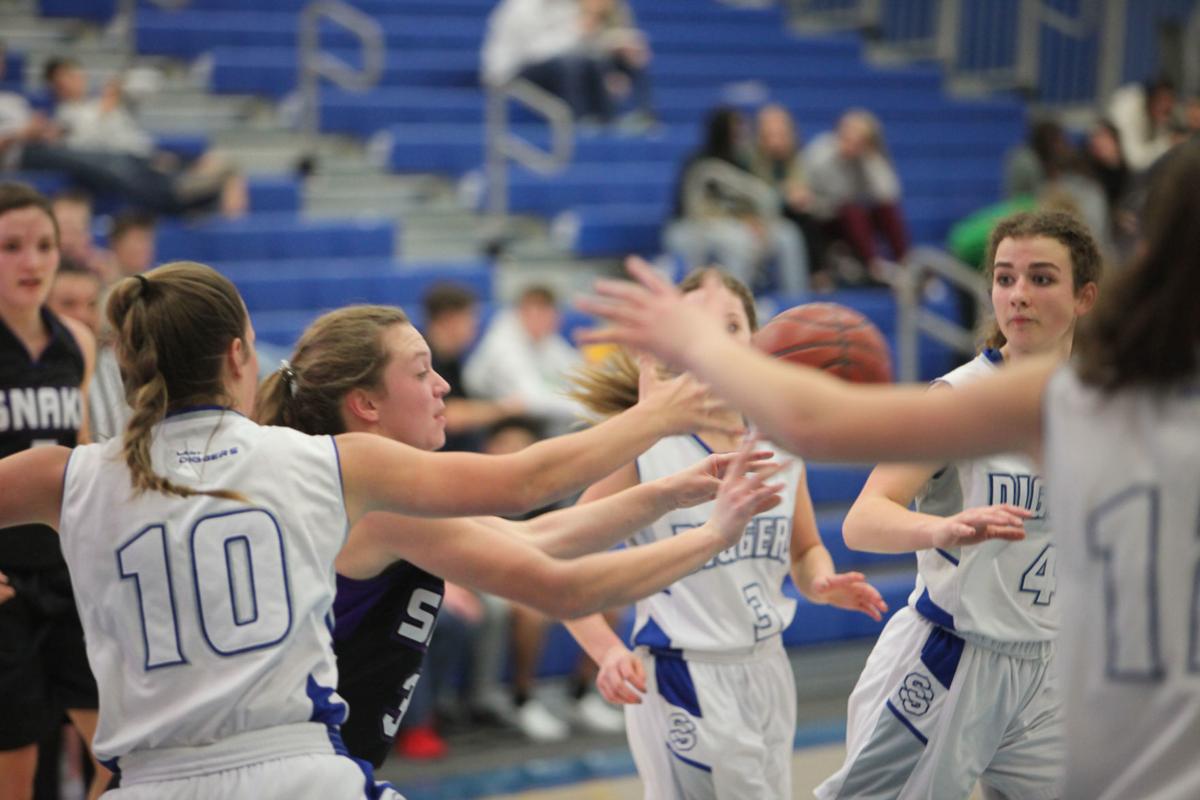 Sugar-Salem players cheer from the bench during a Dec. 8 game versus Snake River.

When the Sugar-Salem High School girls basketball team received its 3A state championship banner and blue trophy 11 months ago at the Ford Idaho Center in Nampa, it added to an already banner year for the school while giving those Diggers a place in history.

It gave the school its fourth state title of what would be seven for the academic year and marked the first back-to-back state titles for the team. Part of that 24-2 season and repeat title were seniors Macie Knapp (now playing for College of Southern Idaho), Madi Fillmore (now playing for Big Bend Community College), Sydney Bradshaw and Lindsey Larson.

“I was a little nervous,” said senior Michelle Luke about the vacancies left by last year’s seniors. “I knew after our first game, we were a team that was gonna play a little differently than last year.”

Sugar-Salem alumnus and head coach Crystal Dayley said those seniors were one of the best if not the best class to come from Sugar and left big shoes to fill this season.

“We’d had a group that had been playing varsity together a long time,” Dayley said. “We were all worried about losing them. They left some very big holes. It’s been super fun to see how everyone has stepped up and elevated their game to fill in those gaps we lost.”

This year’s Diggers got a big boost in their second game of the season, however. In a battle of two-time defending state champions, Sugar-Salem defeated Soda Springs 57-49 on Nov. 22 in Sugar City to end the Cardinals’ 54-game win streak that extended back to their 2017 season opener (also a loss to Sugar-Salem).

“That game was pretty important to me,” said senior Macey Fillmore. “I was really was happy we finally were able to overcome them. We really played well as a team. It wasn’t one player taking over.”

The stands were packed for that game, giving it a tournament feel.

“It was just an amazing atmosphere,” Luke said. “I think that’s when our team came together for the first time this season, stepping up to the challenge.”

Dayley said the win was high up on the list for her, adding that it was one of the most fun games she had ever coached. It also showed this year’s team--and the rest of the state--what was possible. Sugar-Salem’s two losses last year were to Soda Springs.

“If we can beat Soda, we can beat anybody,” Dayley said. “Nobody realized what we could do until we beat them. It made those seniors realize, ‘You know, this is something last year’s seniors didn’t get to do.’”

Defense, particularly zone, has been Sugar-Salem’s bread and butter since Dayley became head coach in 2012. Dayley had high praise for this year’s team, which she described as having no weak link defensively.

“What you’ll find with this team is they’re probably the best defensive team we’ve had,” Dayley said. “They’re also probably the most coachable team I’ve ever had. I’d take that over talent any day.”

“We’ve both kinda been the leaders up top defensively,” Luke said. “She brings a lot of intensity. I guess we’re just able to read each other well.”

As for pressure of being two-time defending state champions, Dayley said the Diggers are aware of the target on their backs and that teams tend to play their best basketball against them. She added that the Jerome Tournament in December furthermore revealed Sugar-Salem’s potential this season. The Diggers, one of two 3A teams in the tournament, went 3-0 and won the title 62-37 over Jerome.

“That’s when I realized this is a special group of kids,” Dayley said. “They own the pressure. This group of girls is very different than any group I’ve had in the past. There’s so many little things you notice.”

Like Dayley, Luke and Fillmore spoke highly of the Diggers’ work ethic this season. They are in a weight training class and stay after practice to work on fundamentals.

“With the vacancies (left by the class of 2019), we knew we were gonna have to work a little bit harder than other years,” Luke said. “I’ve seen a lot of that in my teammates this year, especially more than any other year. We’ve come together and put in the extra time.”

“We know that if we work hard, we’re not gonna have any regrets,” Fillmore added. “If we win state, that’s great. We’re just happy to be playing basketball.”

Senior Abigail Yadon, who returned to sports last fall after missing her entire junior season to recover from ACL and meniscus surgeries, is playing again for Watersprings. After missing the early part of the season due to nagging injury from volleyball season, she returned in the Warriors’ Jan. 4 game at Challis.

Watersprings head coach John Yadon, her father, said they are being cautious with her return.

“She averages maybe two and a half minutes a quarter,” he said. “We’re just trying to be smart. She’s doing pretty good, just building strength in that leg and making sure she’s good moving forward.”