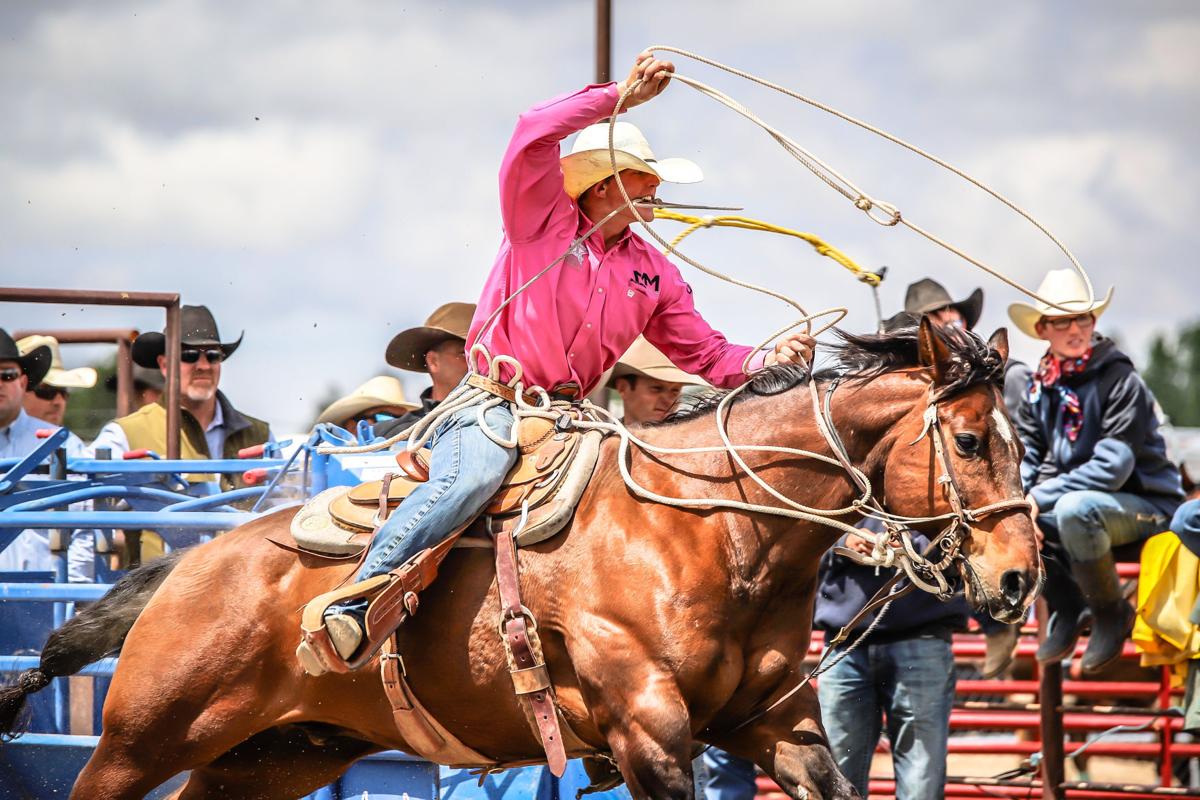 Devon McDaniel looks to rope his calf during a tie-down roping competition. 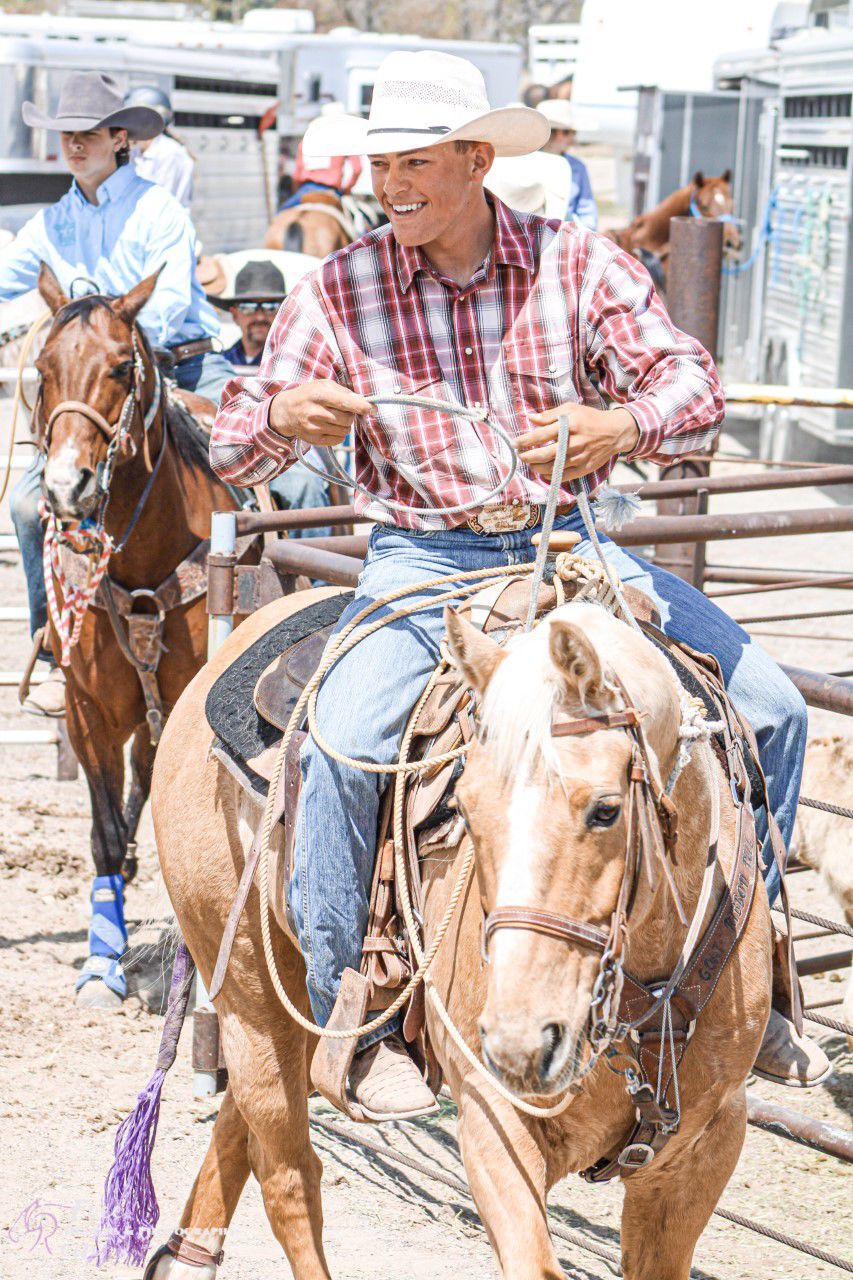 Brey Yore is a District 6 Champion. 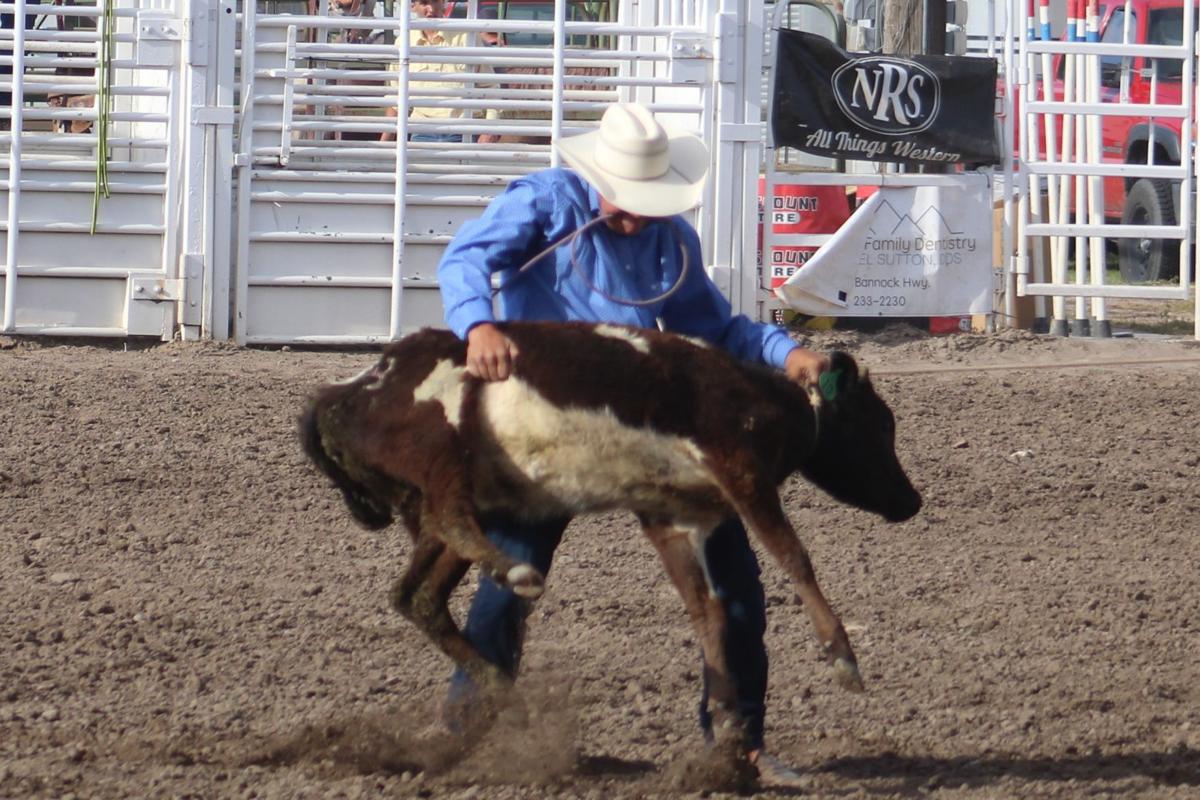 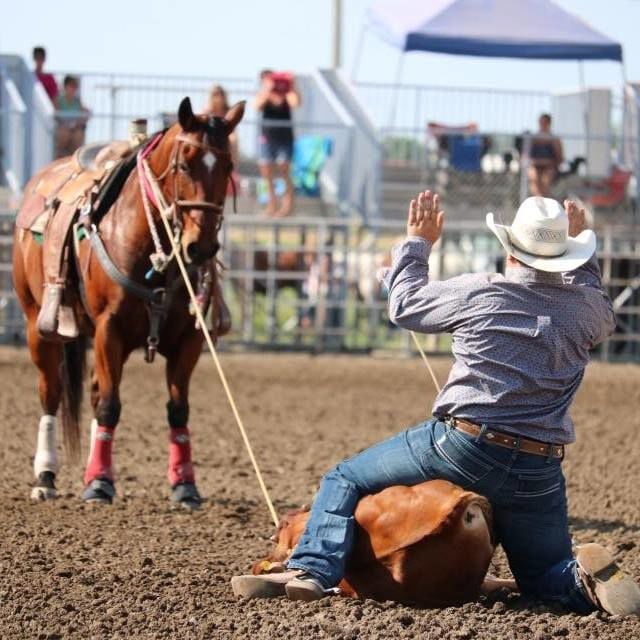 Cooper Pavkov will be one of the favorites.

Devon McDaniel looks to rope his calf during a tie-down roping competition.

Brey Yore is a District 6 Champion.

Cooper Pavkov will be one of the favorites.

Now called tie down roping, except by the true old-timers in the game, calf roping started on the ranches, when a cowboy was out riding the range, looking for strays and if he came across one, he generally would rope the calf, tie him so he couldn’t get away and then proceed to build a fire, heat up a branding iron and brand the calf right there, so as to deter rustlers from stealing the calf down the road.

That is the basics, but in today’s fast-paced, action-packed rodeos, there have been a number of rules applied to keep things fair.

The calf, who generally is closer to a weanling or yearling and sometimes appears to be as big as the cowboy, is placed in a chute, where he is going to get a bit of a head start on the cowboy.

The cowboy on his horse is some 10 to 20 feet behind the calf, in a box, and he can’t get away faster than the calf or he breaks a barrier that will add a penalty to whatever time the cowboy can come up with after roping and tying the calf. The cowboy will have a loop ready and will attempt to rope the calf as soon after starting as he can, but there are all sorts of things that can go wrong. The calf might take a quick turn and the loop lands on the ground, the calf could run through the loop, again leaving the cowboy sitting there without a roped calf, the horse may not stop quick enough, allowing the calf to work himself free. All of those things are bad as you might imagine, and quickly leads to no time for the cowboy.

If the cowboy is successful in making a catch, getting the calf around the neck, then the real work begins. The cowboy must run down the calf, pick him up and throw him to the ground, then grab three of the four legs and secure them with a short piece of rope called a piggin string and when the calf is secured, throwing his hands up indicating that he is done. The calf is then given a chance to get free and if so, then the cowboy is left with nothing. If the calf remains tied up, then the cowboy gets his time and if he is the fastest in the performance, he gets the win, which is of course why the cowboys do this to begin with.

District 4 is blessed with some really good cowboys and cowgirls and as far as calf roping or tie down roping is concerned, there are at least six cowboys who have a chance to claim a state title this year from the area.

We can start with Wyatt Jensen, but it could be any of the six who may get the job done. Jensen is a sophomore at Snake River High School and he and his team roping partner Boedy Thompson are now the two-time defending team roping champions from District 4. They also are both qualifiers to the national finals high school rodeo from a year ago and that is pretty heady stuff for a pair of freshmen from a year ago.

Jensen works at the event every single day and his technique and skill level are about as high as they can be, but that also puts a target on his back and he is the one that everyone will be shooting for now that cowboys like Cooper Duffin and Nick Chappel have graduated a year ago. That moves Jensen up to the top rung and he is the man to beat.

Jensen stormed through the District 4 rodeos, barely missing a beat or a calf during the 12 rodeos in three cities and arenas and came out on top of the standings with 75 points. He was 19 points clear of the runner-up, Riley Barber, who ended up being the All-Around Cowboy. That says a lot for the sophomore, who has really fine-tuned his game to the point that he is the one to beat this year. He still must get it done and it will require a bit of good fortune as well as his skill since he still will need to rope and tie all three of his calves in the performances and then place well in the short go as well in order to be named the champion. Believe me, Jensen is up to the task.

Riley Barber and Kellen Merica finished second and third respectively and both have shown that they are more than capable of upsetting the field. Barber knows how to win as evidenced by his state title a year ago in bull riding. Merica forced the pace all spring until Jensen and Barber found their groove and closed late to take the top two spots. In a field that will have more than enough talent to steal this event away in the dark of the night, these two will need to be in their best form in order to upset the crowd and take home the top prize.

District 4’s rookie of the year was Ira Oleson and he shows up here as the fourth of the six qualifiers to state from the district. He earned 31 points in the event, but he started slow and closed with a rush. Oleson also competed in five events and placed in nearly all of them, so he is one who may be banging on the door of an all-around title before too long and with this cowboy’s work ethic, it may be sooner rather than later, it is just a matter of time and a few minor tune-ups for him to hit his best stride.

Hunter Roche and Boedy Thompson round out the District 4 team and both are involved in other events that may take the attention to start with and that is not conducive to a quick start in this event. If either of these two fine cowboys expect to advance to the national finals, they will need quick starts in here and both are very capable of getting that done!

Tyler Wanstrom, the All-Around Cowboy from District 1, was also the tie down roping champion for the district and did so in a runaway fashion with 115 points in 12 rodeos. It seemed like he was first, second or third and never missed a loop.

With talent like that, you either totally dominated the competition, or the competition was lacking in some way. We like to think that Tyler was just that good and if so, then he will challenge the boys from District 4 for the state title.

District 2 is sending Devon McDaniel as their champion and runner-up Birch Eiguren, both of whom are strong competitors. McDaniel was also the All-Around Cowboy in the district and Eiguren was part of the best team roping tandem, so either one could get things done at state, they simply need to get a good start and some fast times.

District 3 will be sending Luke Olsen as their champion and he did it the hard way with only 54 points in 10 rodeos. That is the lowest total of all the district champs, so he may be in over his head.

District 5 has Cooper Pavkov and Wes Shaw and both have reputations as top-notch cowboys. One or the other will have to shine in the early performances to be taken notice of, but both are capable. Pavkov scored over 100 points in his district and Shaw wasn’t far behind with 89, so both know how to get it done and will be expected to get a fast start and build on the early momentum. Failure to do just that could cost them a chance at the coveted state title in this event.

District 6 has a history of performing well at the state finals. They are sending a pair of very fine cowboys in Brey Yore and Jett Vanbiezen who finished first and second, but there is more depth in this district than in many of them as Aaron Champneys and Lucas Cruz and Ryn Severe and Joe Zebarth are all capable of springing an upset. This event is stacking up to be possibly the deepest and best of all the events that will be contested this next week. Brey Yore scored 116 points to win the event, while VanBiezen had 96 to finish in second. That is a lot of points no matter how many rodeos you participated in to earn them.

District 7 is next on our list of qualifiers and they will be sending a host of cowboys to compete in this event. No one really stood out, but all six were very close when the points were tallied up. The top six finished within 14 points of each other, so it is any guess as to will show up and be the representative in here. The district title went to William Warner, with Carson Klingler in second and Tyson Bond in third.

District 8 will be sending champion Tom Simpson as their top point earner with 102. Simpson is an all-around athlete, starring in football and basketball as well as rodeo. He was the champion, but it was close after that with several cowboys having a chance. Haze Child and Wyatt Cutler tied for second while fourth was Cason Barker while All-Around Cowboy Logan Corta finished up in fifth.

District 9 will finish up our look at the tie down roping event, which has shaped up to be quite possibly the toughest event we have seen thus far.

The district was led this year by Wyatt Stephens who ran away with the title, scoring 112 points to outdistance Whitt and Gabe Smith who scored 85 and 76 points, respectively. It looks like Stephens will have to be the one from District 9 to represent in here.