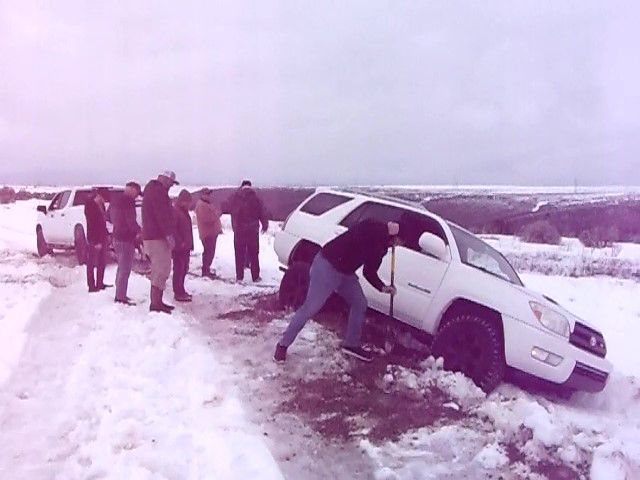 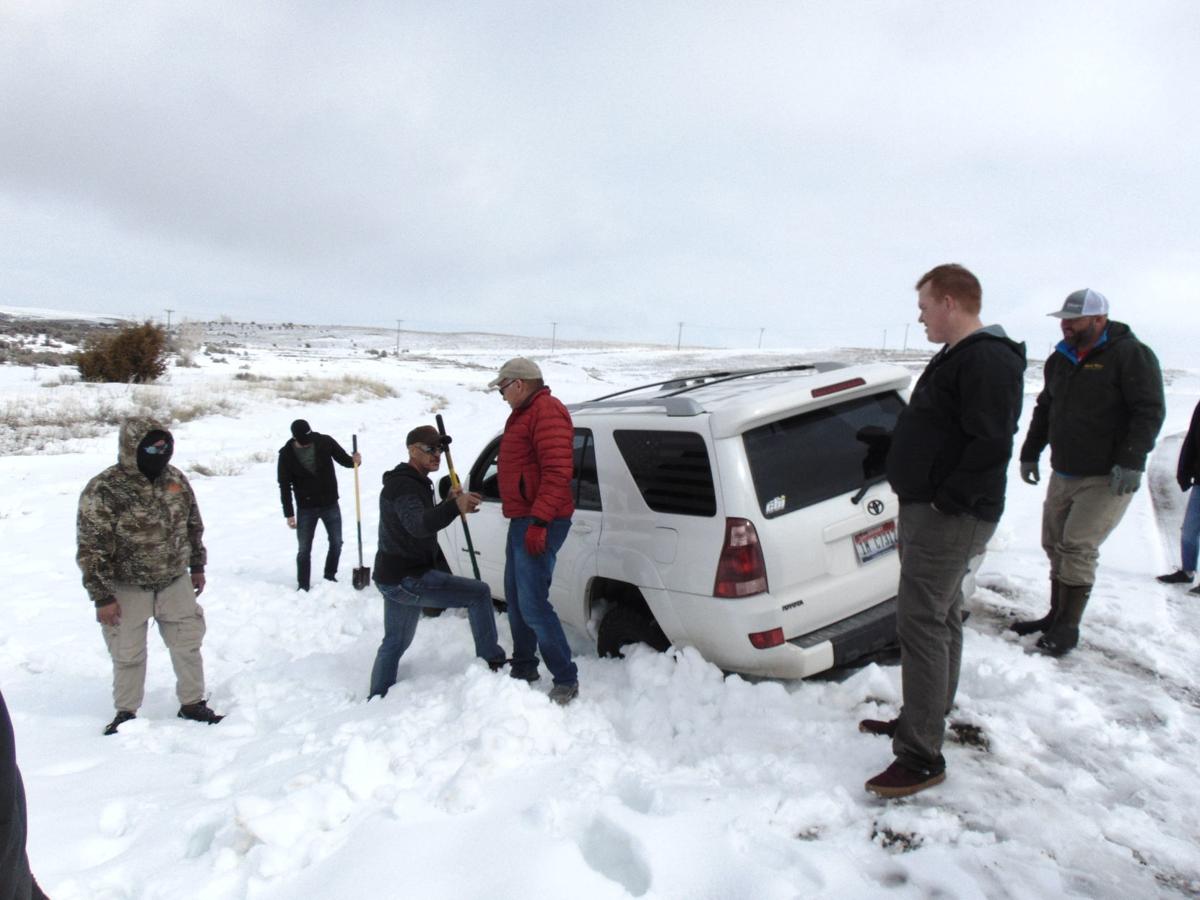 Local residents help in a rescue at Teton dam. 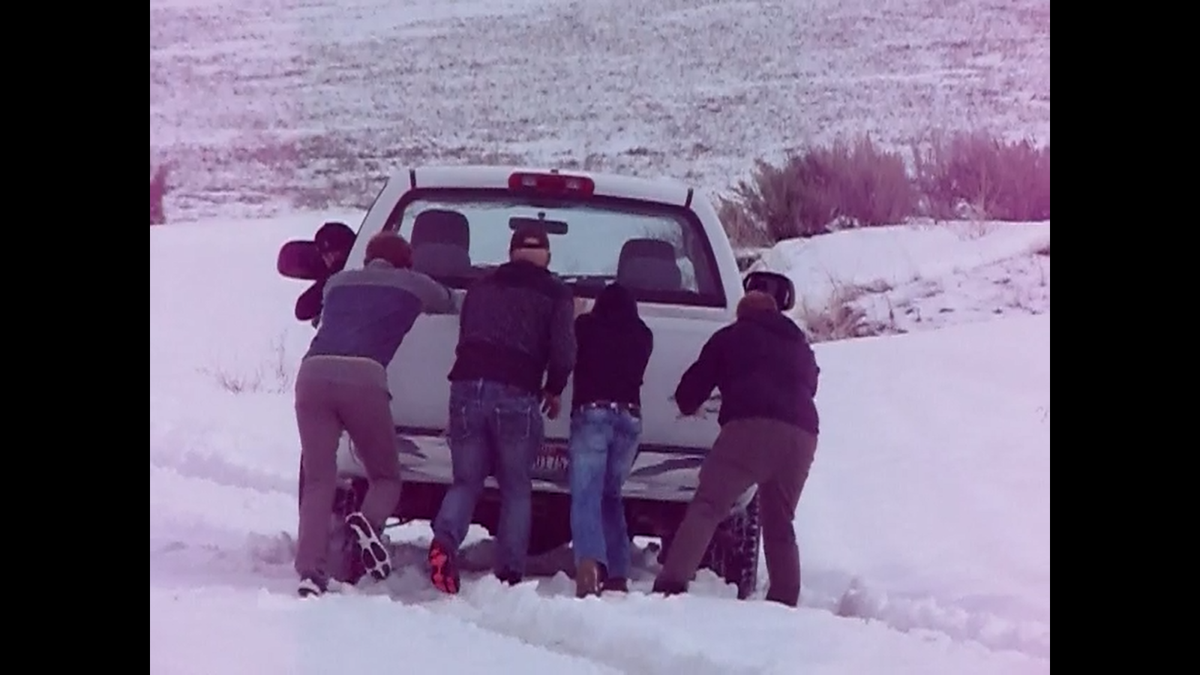 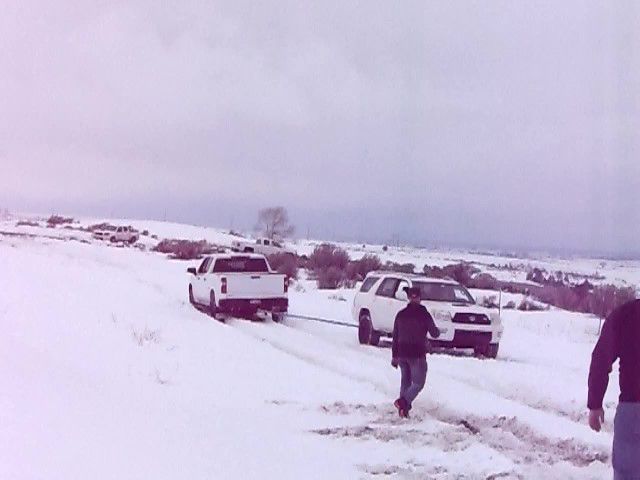 Local residents help in a rescue at Teton dam.

NEWDALE  – Rexburg Mayor Jerry Merrill proved that he is truly a public servant on Saturday.

That morning, he quickly responded to a friend’s request to help pull a Wyoming man and his two Brigham Young University student sons’ trucks out of a snowdrift near the Teton Dam Overlook.

“A friend called me up and said ‘Hey, what are you doing?’ I said, ‘Just Saturday stuff.’ She said ‘You got a truck? Somebody got stuck up at the dam site,” he said. “I said ‘Let’s give it a shot. I’ll be there as soon as I can.’”

As Merrill and his son-in-law, Heath Edwards, headed to the dam site, Newdale residents T.J. Schwendiman and his brother, Hunter Schwendiman, drove up to the old dam site. On a whim, the brothers had decided to get out of the house and go for a drive to the dam. There they found Bill Hart and his two sons, Gavin and Austin, stuck inside their trucks that were surrounded by several feet of snow.

Soon after, Merrill and Edwards came to the rescue. Merrill managed to back his truck down the heavily snow-covered road where he and the Schwendimans, the Harts and a Sugar City family, who had planned to go fishing, dug in, under and around the Hart truck encased in snow after it slid off the road.

The rescuers said that they were more than happy to help the Harts after enduring an increasingly annoying social isolation resulting from fears over the COVID-19. The isolation had drug on to such a point that everybody agreed rescuing the Hart family came as welcome relief and breath of fresh air.

Merrill said he was glad to visit the dam site as it’s always a beautiful place to be, and that he didn’t mind helping. As the mayor, he considers it his duty to help those in need, he said.

“This is a great way to spend your Saturday. We’re out here in nature with lots of good people,” Merrill said.

Edwards joked that rescuing the Harts rescued him from doing housework.

“I got out of folding laundry,” he said.

Bill Hart ventured to Rexburg from Wyoming on Friday to visit his three sons that in addition to Gavin and Austin, includes Jacob. Bill said he originally planned to attend his 60th birthday party with his siblings, but that failed to pan out due to the COVID-19 virus.

Not concerned about getting sick and not wanting to spend his 60th birthday alone, Bill opted to visit Rexburg Friday night to see his boys. As Bill had never seen the Teton Dam site, the family opted to drive up to the dam on Saturday morning.

“We discussed it (Friday) night. This was the only thing we had to do. Everything else is shut down,” he said.

While Bill recalled the dam breaking on June 5, 1976, he had never seen the waterway before. When he arrived at the lookout on Saturday, he was surprised at how large the dam was.

“I’m amazed at how much bigger it is than I imagined,” he said.

Hoping to get a closer look at the famed dam, Bill headed down an adjacent road as his sons followed him. Worried he might get stuck, Bill drove over to the side of the road where his truck immediately sunk and got stuck in the snow. About 15 minutes later, Merrill’s friend showed up.

“If you had gone further, (she) might not have seen you,” Merrill said. “Those people who happened to go on a drive up there to the dam site, maybe, they were inspired to go up there, so they could help."

Bill was most thankful for all the help Upper Valley residents had provided him and especially grateful to Merrill’s assistance.

“Mayor to the rescue,” he said.