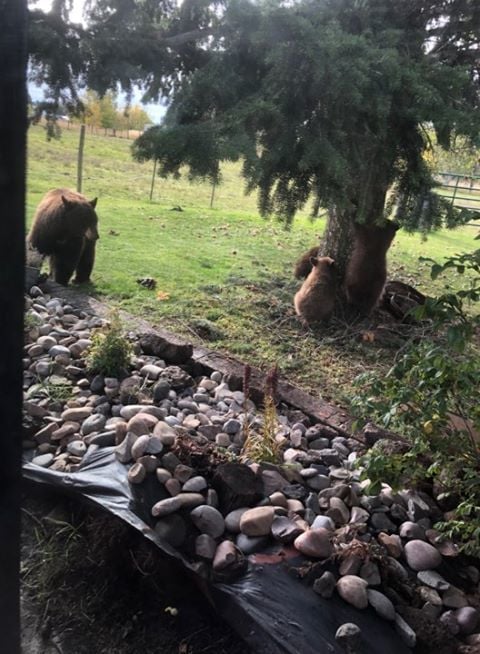 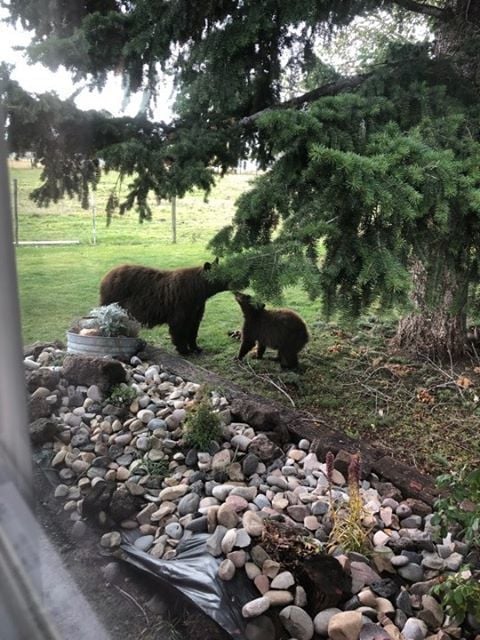 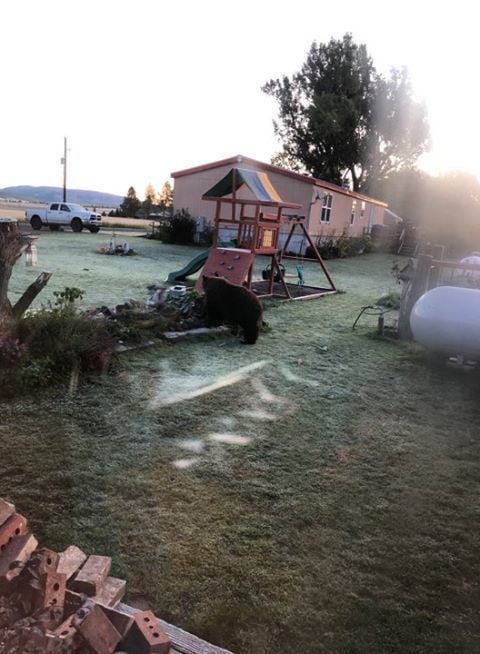 MARYSVILLE – Sunday evening Hannah McCausey and her husband thought they heard noises outside their home and again later that night.

“It wasn’t till daylight that he actually saw the momma (bear) and her babies. So he yelled ‘Hannah, we got bears in our yard,’” Hannah McCausey said.

The couple watched the bears for a while but eventually grew concerned that the bear family would wander into Marysville and hurt someone or something. Hannah McCausey called her neighbors to warn them, and shortly after her husband spied the mother bear and her five cubs.

McCausey noticed how the bears didn’t have a problem turning her yard into their home.

“Mommy bear decided just to take a nap in the tree right next to my window,” she said. “It was amazing to see the bears up that close.”

McCausey noted that the mother bear later circled around the yard counting her babies. One cub remained in a tree while officers tried coaxing the critter down. When the bear finally came down, it ran next door to McCausey’s son’s home and hid under the doorsteps of his home. It later ran to his truck and hid underneath it. McCausey said she was very concerned that her grandson would open the door of his house to get a better look at the animals.

“That was the scary part,” she said.

Thankful that no one was injured, McCausey said she’s been spending plenty of time picking up apples in her yard since the bears arrived.

It was those apples that lured the bears into town, reported Fish and Game Regional Communications Manager James Brower.

“They probably smelled the apples on the ground. It’s a pretty big attractant to bears. They smelled the apples away in the forest and wandered in to grab a quick meal,” he said. “Mom’s trying to get a bunch of food before they hunker down for the winter. They gorge themselves to build up those body fat stores going into the winter,” he said.

The bears were experiencing what Brower called “hyperphagia.” The National Park Service states that during hyperphagia, bears are constantly hunting for food.

“During the fall months, bears eat and drink nearly nonstop. They need to put on weight to prepare for winter and hibernation,” it reported on its webpage.

Bower said that it was unusual for this mama bear to have five cubs with her. Twins and triplets are often common, he said.

“I’ve seen four before, but five is really uncommon. It’s not something you see every day. It’s pretty exciting,” he said.

Bower says that while it’s possible for a bear to give birth to quintuplets, he suggested that the mama bear assumed responsibility for some motherless cubs.

“She may have adopted them at some point. They may have been abandoned,” he said.

Fremont County Sheriff Len Humphries reported that it’s not unusual for hungry bears to make their way into town this time of year.

“We have bears wandering down all the time. They have good noses. They can smell those apples from a long ways a way,” he said.

Fish and Game stayed in Marysville until around 6 p.m. on Monday. No injures were reported following the incident.

MARYSVILLE – A mama bear and her five cubs made themselves at home inside a Marysville apple tree Monday morning.