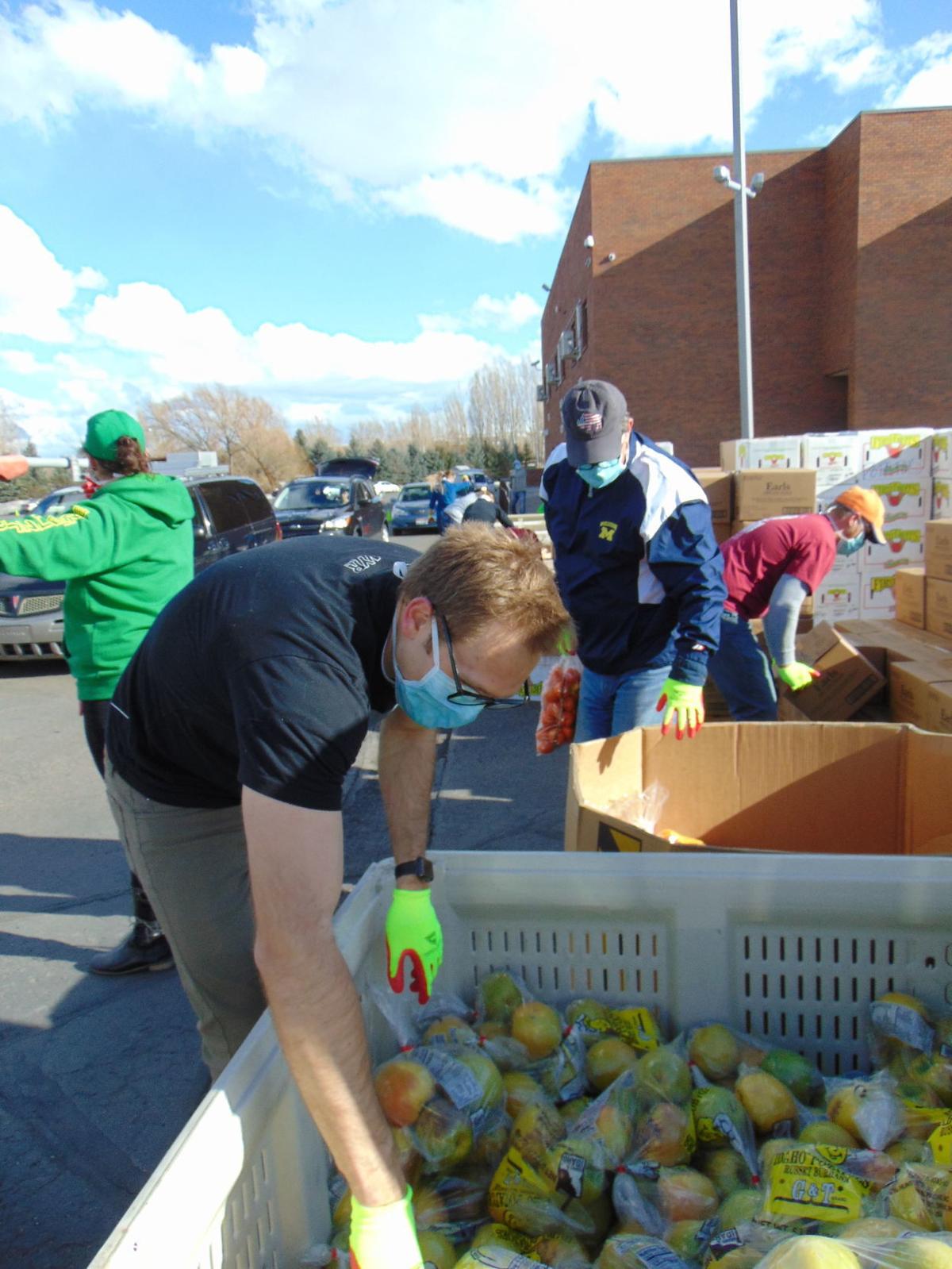 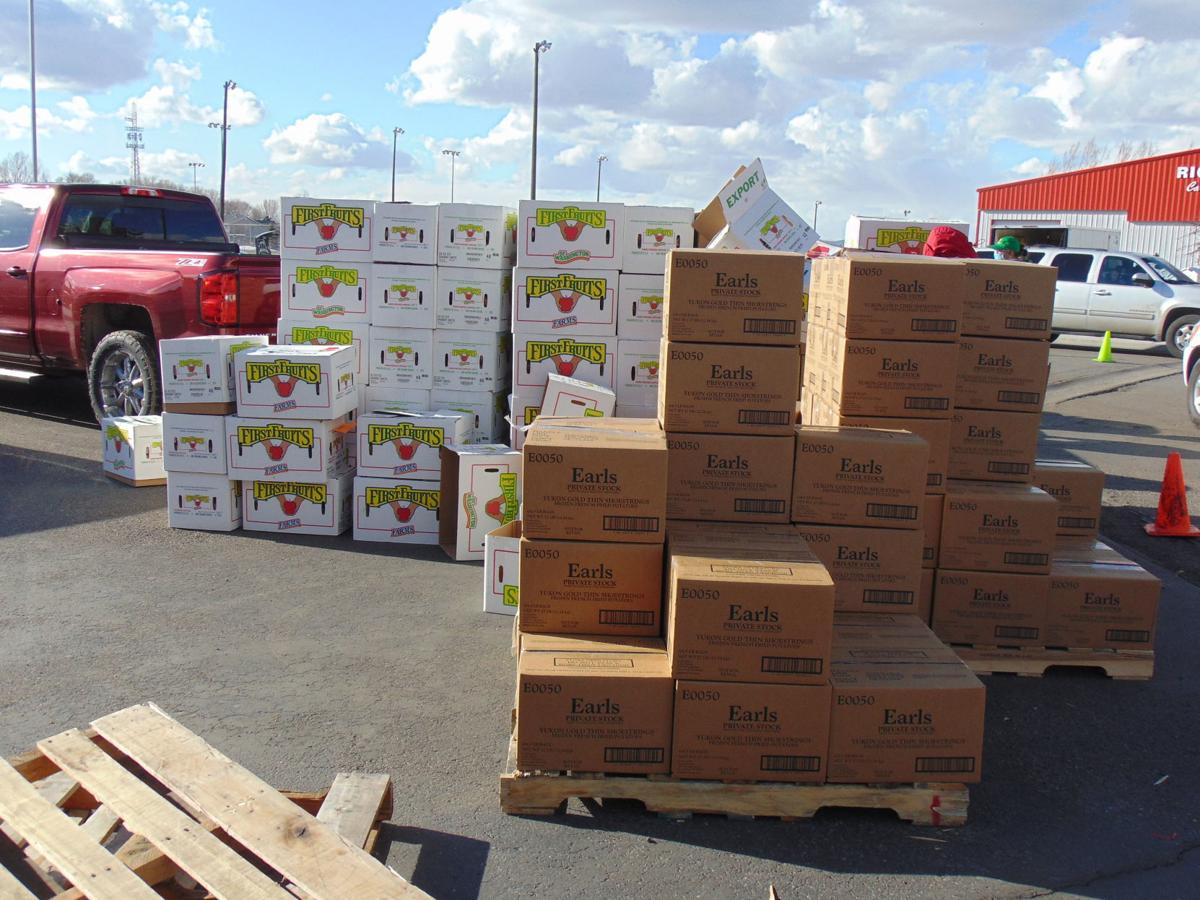 Goudy helped create and volunteers with the Rexburg Mobile Food Pantry. The organization teamed up with the Idaho Food Bank to package and provide the food. The Rexburg pantry was unable to do its traditional monthly food pantry on March 17 at Wilcox Fresh Warehouse because of concerns over the COVID-19 virus and social distancing.

“We feel really lucky," she said. "It seem liked everybody followed the guidelines to the T. Volunteers didn’t have to touch a single car door or trunk. People were very willing and gracious to get out and open their cars and put their food in."

As always, food recipients were grateful for the free food, Goudy said.

“The Idaho Food Bank sent us boxes for 450 families," she said. "We ran out of food. As we saw we were running out of food boxes, we held back on the potatoes and apples. The people who were still coming by at least got something. We handed out an additional 50 boxes, so we served over 500 families in just under two hours.”

As a result of the social distancing requirements, those distributing the food weren’t allowed to touch anything inside the visitor’s cars. Instead, food recipients were asked to arrange the inside of their cars or their cars’ trunks to make room for the food volunteers placed inside.

Goudy estimated that 30,000 pounds of food was provided – about the same amount as the Rexburg food bank provides each month. The main difference was that the Rexburg organization has around 125 volunteers to normally help, but because of COVID-19, only a dozen could assist on Wednesday.

“We did it with the ‘Fearless 12.’" she said. "We had two on the road and the 10 that were packing boxes and running through traffic. Even our very own mayor, Jerry Merrill, helped with traffic."

Goudy also thanked Madison Jr. High School officials for their assistance, and the Rexburg Police Department who sent Officer Colin Erickson to help with the flow of traffic.

Goudy said that the local food bank serves as the facilitator of the monthly food drives offered here.

“We’re independent and organize it," she said. "What the Idaho Food Bank provides is the food. They coordinate a time to bring in the food for locations that are rural and don’t have a brick and mortar food pantry that people can walk into any day."

“They pre-packed all of the boxes for us," she said. "All we had to do was put the box in the car. Normally, we were the ones sorting food and packing it which is why it takes us so many people. Because of the virus we can’t have as many volunteers together, so the food bank workers took it upon themselves, spent a week’s span of time and got that all planned for us."

Thursday’s event was the first food distribution the Idaho Food Bank had made during the COVID-19 crisis.

“We reported back to the Idaho Food Bank," Goudy said. "They’re taking this info and distributing it to the other mobiles (pantries) around the state."

The Rexburg Food Pantry will hold another food distribution on the third Tuesday of April at the Madison Jr. High School parking lot. Goudy didn’t know where the food would be provided in May.

Unless Goudy hears differently, the two food banks will continue to operate under the same restrictions they did on Wednesday for the upcoming April food distribution.

“One more month under this emergency distribution method," she said. "The Idaho Food Bank will still be sending us pre-boxed food that we’ll be able to (distribute) with the skeleton crew of volunteers. Come May, we will reevaluate where everything is at, what restrictions have been lifted, and see if we can start getting back to normal."

For more information on the Rexburg Food Pantry visit www.facebook.com/groups/rexburgmfp/.