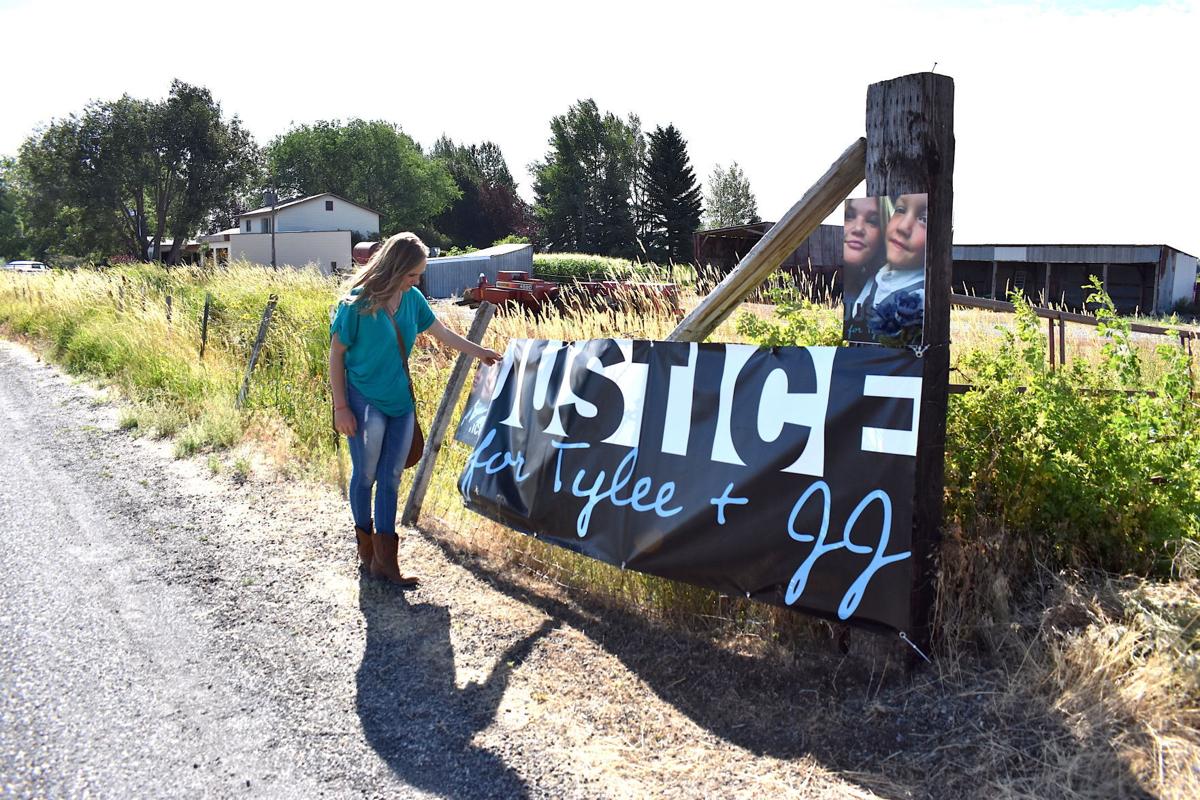 BYU-I student Jenna Hall visiting a new memorial for siblings J.J. Vallow and Tylee Ryan. The memorial has been placed on Rhea and Boyd Price's property. 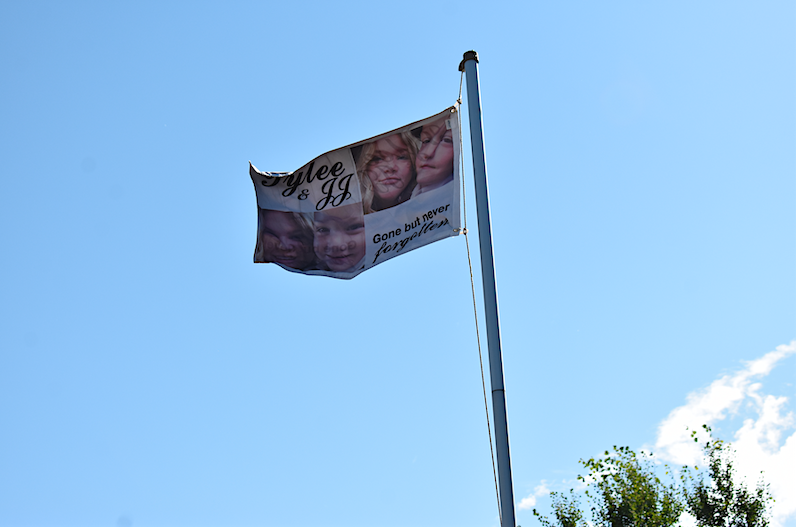 Rhea and Boyd Price are displaying this flag in honor of siblings J.J. Vallow and Tylee Ryan.

BYU-I student Jenna Hall visiting a new memorial for siblings J.J. Vallow and Tylee Ryan. The memorial has been placed on Rhea and Boyd Price's property.

Rhea and Boyd Price are displaying this flag in honor of siblings J.J. Vallow and Tylee Ryan.

A new memorial banner “Justice for J.J. and Tylee” honoring late siblings J.J. Vallow and Tylee Ryan has been placed on Rhea and Boyd Price’s Salem property. The property is across the street from Chad Daybell’s acreage where the youth were buried.

Two women recently approached the couple and asked if they could put the banner on the couple’s fence. Residents may also place items at the new memorial as long as the items don’t quickly deteriorate.

A previous memorial for the children on a fence bordering Chad Daybell’s property was taken down earlier this week. Rhea Price doesn't known who removed the first memorial.

Rhea Price also has a banner with “Tylee and J.J. gone but not forgotten” flying from her flagpole.

“It’s definitely a mournful feeling being here. I wanted to show my respects and my condolences,” she said.

In June, Rhea watched from her home as Fremont County Deputies, Rexburg Police and the FBI located the children’s bodies.

“It was hard, but at least we know where they are," she said. "I was afraid they’d never find any clue of them. “I just hope that this can all be figured out legally from the whole beginning to the end.”

It all started when J.J.’s grandparents Kay and Larry Woodcock reported the children missing after they hadn’t heard from J.J. in weeks.

On Nov. 26, and at the behest of the Woodcocks, police did a welfare check at Lori’s Rexburg condo that she shared with new husband Chad. After learning Lori had given officers false information, the police returned to the condo to find the newlyweds had fled to Hawaii.

From there, an interstate manhunt from Idaho to Arizona to Hawaii began to find the children. In February, police arrested Lori in Hawaii and transported her back to Rexburg where she’s been held at the Madison County Jail on a $1 million bond.

Once the children’s bodies were found, the normally quiet road in front of Rhea’s house turned into a highway filled with both mourners and media, she said.

“It was like a circus. There’s just been lots of traffic up and down the road. But that’s OK. People need to deal with this in their own way,” she said.

Since then, the couple has received requests for interviews from national media organizations.

“We said what we wanted to say — 'basically let law enforcement do their job'. I know those children were over there. I know Tammy got shot at because we had the police out here that night,” she said.

In October, and two weeks before Tammy Daybell died, a masked man holding a paintball gun threatened her. Tammy had just returned from a Church of Jesus Christ of Latter-day Saints Relief Society meeting when the man approached her. After Tammy shouted for Chad, the man ran off.

Fremont County Sheriff’s Deputies checked throughout the Daybell’s neighborhood but found no one.

“We had spotlights going through everything,” Rhea said.

Initially, officers considered the incident a prank until they learned of the missing children, Chad’s quick remarriage to Lori, a paintball threat on Lori’s former in-law Brandon Boudreaux, and Tammy’s death two weeks after she had been similarly threatened.

In December, the Fremont County Sheriff’s office requested Tammy’s body be exhumed for an autopsy on December 11. Results are still pending.

Following the incident, Boyd Price and his son, Matt Price, searched for the gunman in neighborhood sheds.

“Somehow (the gunman) knew Tammy would be there. He came around the corner of the house,” Rhea said.

Tammy didn’t have any enemies, she said.

“We kind of wondered, why would (he) go to that house. She was not a confrontational person. My husband kept saying, ‘They got the wrong house. Why would anybody do that to Tammy?'” Rhea said.

Rhea recalled how frosty it was that night and anybody would have to be crazy to want to prank someone when it was freezing outside.

“It was dang cold. You know the kids in the neighborhoods — their parents would have said ‘You’ve got to be in the house, it’s too cold.’ They wouldn’t let them be running around. It was just weird,” she said.

Rhea says she knew Chad, but didn’t know him well enough other than to say hello every now and then. She said he seemed to be very quiet. Rhea noted that the Daybell kids are very good children.

“I feel sorry for the kids,” she said. “It’s going to take them a long time to know how to deal with something like this,”