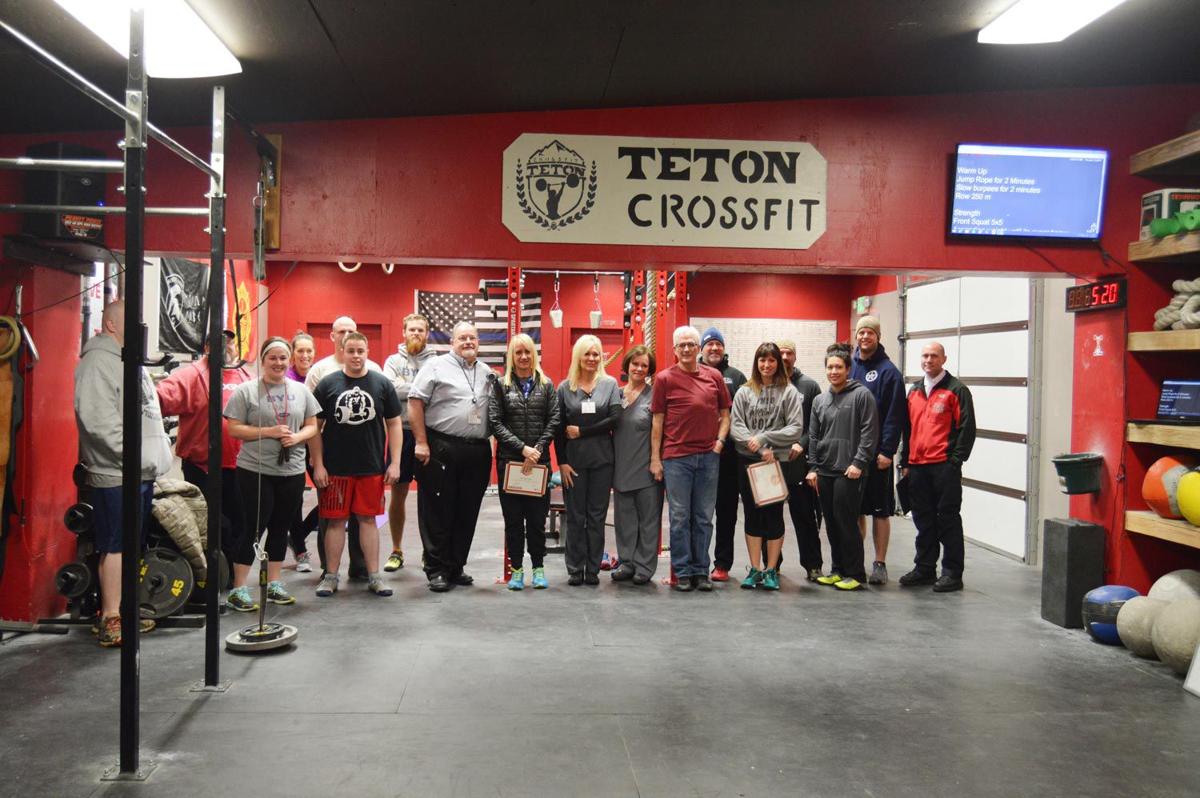 Teton Crossfit members, Madison Memorial ER, Life Flight and the Madison Fire Department were honored Friday, Jan. 13, for their involvement and support in saving the life of Howard Egan. 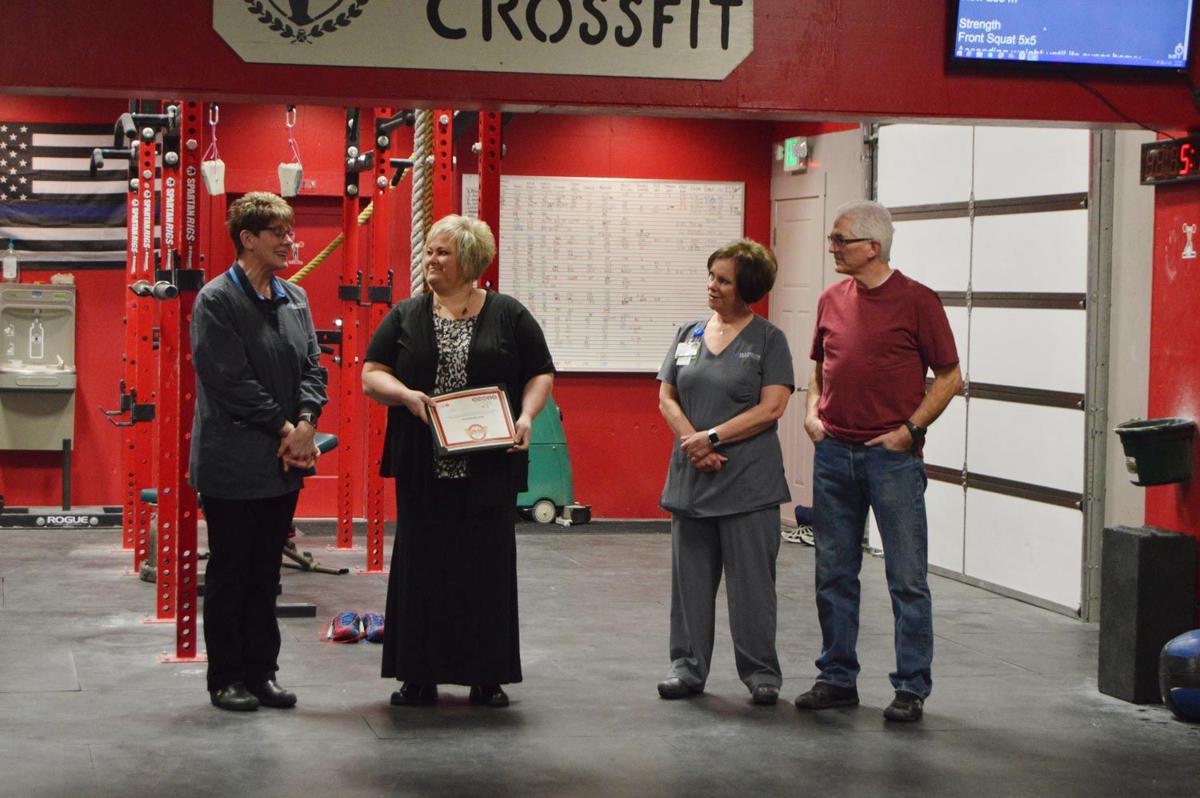 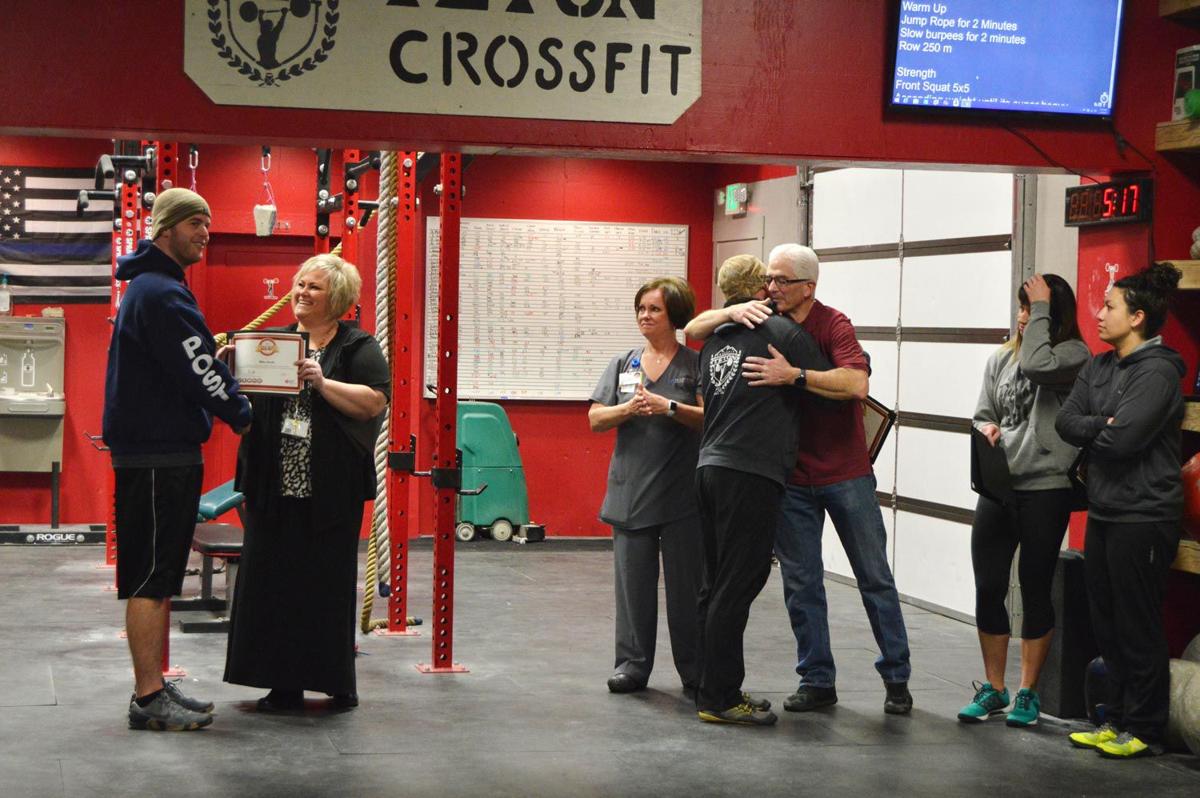 Howard Egan hugs Ryan Malm, one of the four Teton Crossfit members involved in the hands-on process that saved his life. Two of the four, Kristin Wolfe and Nani Bartholick, stand at the far right, and Mike Steele receives his HERO certificate from Heather Burrell.

Teton Crossfit members, Madison Memorial ER, Life Flight and the Madison Fire Department were honored Friday, Jan. 13, for their involvement and support in saving the life of Howard Egan.

Howard Egan hugs Ryan Malm, one of the four Teton Crossfit members involved in the hands-on process that saved his life. Two of the four, Kristin Wolfe and Nani Bartholick, stand at the far right, and Mike Steele receives his HERO certificate from Heather Burrell.

REXBURG — Nurse Tauna Egan was working in the ER in early December when she heard the news: Her husband had gone into cardiac arrest.

Howard Egan, 61, had been doing Crossfit at 5 a.m. six days a week for years. He had been working out at Teton Crossfit in Rexburg on a typical early morning when he suddenly collapsed.

His wife heard about the 911 call on the scanner in the ER and went to get the trauma room ready. She had joked that it was her husband, as the call was made near Cedarpoint Trucking, where Teton Crossfit is located.

But when another nurse told her it was Howard, her heart sank.

“That was probably one of the worst days of my life,” she said.

Tauna Egan said her husband’s family has a history of heart problems. For years Howard Egan had been on cholesterol and blood medication, and he has worked hard to be fit in order to prevent facing his own heart complications.

She believes his good health played a key role in his survival, but if it hadn’t been for Howard Egan’s fellow gym members, he wouldn’t be here to tell the story.

A group of gym members saw Howard Egan collapse, ran to his side and began CPR, while one called 911.

“I’m grateful that they knew what to do and did it,” Howard Egan said.

Tauna Egan says the people at Crossfit who responded were angels. She said they will never know how thankful she was for what they did.

If it weren’t for them, she said, her husband wouldn’t have survived for more than a few minutes.

“If they wouldn’t have done anything, he would have died,” she said.

After healthcare professionals arrived, they began all of the necessary lifesaving procedures, and Howard Egan was life-flighted to EIRMC so he could receive the care he needed.

He was in the hospital for eight days before he received open-heart surgery, and three days later he was home.

“It just went the way it was supposed to go,” she said.

According to statistics from the Sudden Cardiac Arrest Foundation, the average survival rate for out-of-hospital cardiac arrest is just 10.6 percent, but nearly one in three victims survives when the arrest is witnessed by a bystander.

Madison Memorial honored the gym members who rescued Howard Egan at Crossfit last Friday morning. Those who specifically received American Heart Asssociation HERO certificates for being involved in the hands-on rescue process were Nani Bartholick, Kristin Wolfe, Mike Steele and Ryan Malm. The other gym members received a certificate for their support throughout the process.

MMH officials also honored the A-shift of the Madison Fire Department (the shift that responded to the call that day), the Madison Emergency Department and Life Flight personnel for their service.

“We’re here to honor our heart saver heroes that did exactly what you’re supposed to do,” said Lundquist.

The gym members’ service didn’t stop the day of Howard Egan’s rescue. They also set up a GoFundMe account to raise money to help the Egans.

“Most people who suffer cardiac arrest, unfortunately, do not make it. Howard, however, is a strong fighter and is making an incredible recovery!” states the GoFundMe account, which was set up by Teton Crossfit owner Tyler Martin.

The GoFundMe was based around t-shirts and a campaign with the slogan #HowardStrong. All profits from the campaign and t-shirt sales went toward helping the Egans. The GoFundMe raised nearly $2,000 in about a month. The group decided to use the money to purchase an automated external defibrillator for the gym in case of future emergencies.

The main point the hospital wants to emphasize is for people to act right away if they witness an emergency. A victim’s chance of survival increases with higher knowledge, she said, but it is the willingness to act that makes a difference.

The advice Howard Egan would offer to others is to be in good health. The other thing that saved his life — being in the right place at the right time — is something people can’t really control, he said.

Tauna Egan’s advice to others is to not hesitate to act if they see someone in trouble. She said they can also take a CPR class if they want to learn more about what to do.

“Get trained, and don’t be afraid to use it,” Lundquist said.

Burrell said one problem hospitals see is people being so afraid of being sued that they do not react to someone who is unresponsive. However, she said all 50 states have Good Samaritan laws that protect people from litigation if they were doing what they felt was right to help a sick or injured person.

“Basically Good Samaritan laws say you can’t be sued for trying to help,” she said.

Even if people haven’t taken a CPR course, if someone collapses and is unresponsive, Burrell says all someone has to do is call 911 and push hard and fast in the center of the chest to the beat of the Bee Gee’s “Stayin’ Alive.”

If there is any question of what to do, Burrell said 911 will help guide the caller through the process.

She also advises people not to downplay the importance of calling 911 or hesitate to call the emergency number.

Pointing to the crucial role the 911 call played in Howard Egan’s case, she said, “Without 911, none of this other stuff could have happened.”