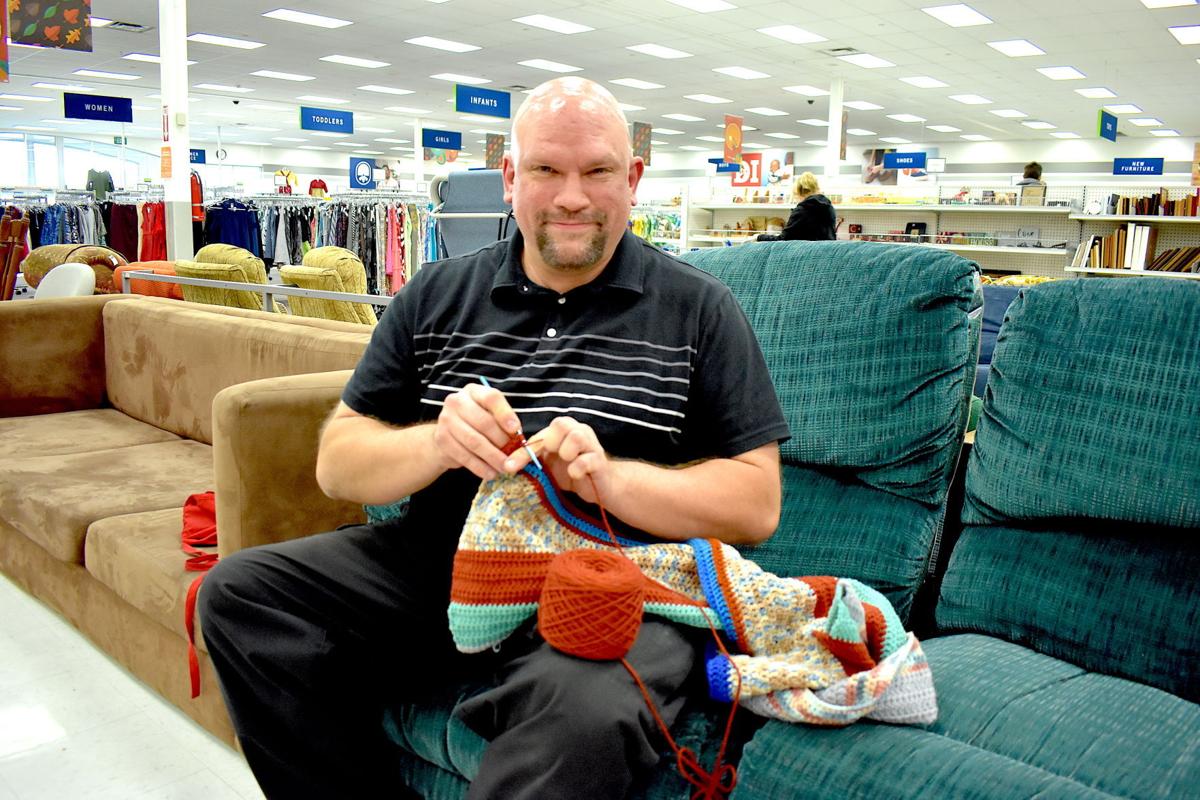 Josh Nuttall crochets to help overcome the impact of a brain injury he received after he crashed his semi tractor trailer in 2015. 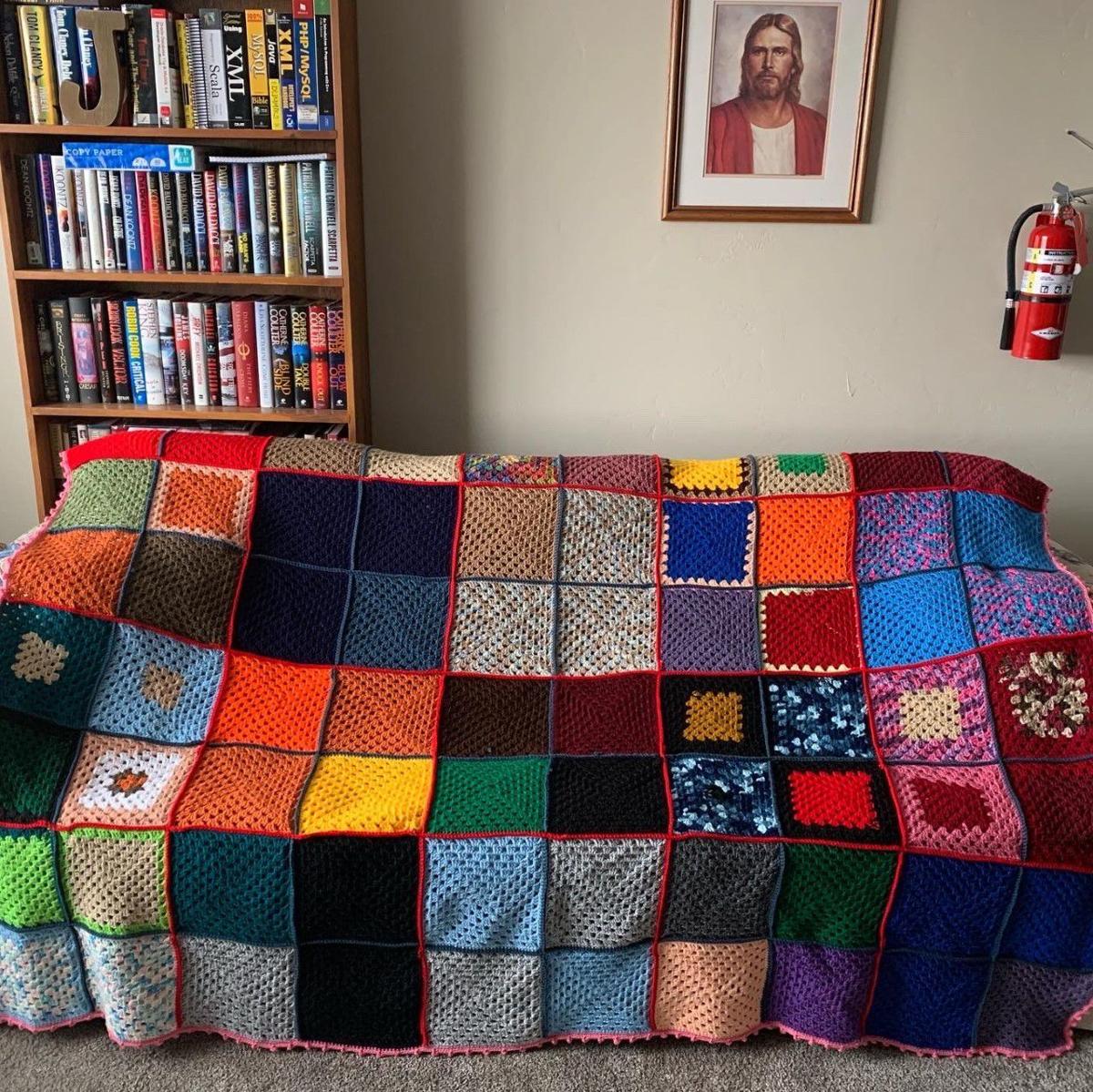 Pictured here is one of the many crocheted blankets that Joshua Nuttal has made since he took up crocheting following a 2015 trucking accident.

Josh Nuttall crochets to help overcome the impact of a brain injury he received after he crashed his semi tractor trailer in 2015.

Pictured here is one of the many crocheted blankets that Joshua Nuttal has made since he took up crocheting following a 2015 trucking accident.

A Rexburg man, who suffered a severe brain injury after crashing his semi, later turned to crocheting to help heal the wound.

Josh Nuttall took up crocheting shortly after being released from a 15-day hospital stay split between two medical facilities.

“I didn’t have much to do after I was out of the hospital when I got home. My mom sat me down and gave me a two-hour crash course in some crocheting basics,” he said.

Nuttall followed that up by watching YouTube crocheting instructional videos.

“I practiced and taught myself how to read patterns,” he said.

As he recuperated, Nuttall told doctors he had taken up crocheting.

“My neurosurgeon said ‘Keep that up. It’s really good therapy for your brain injury and recovery,’” Nuttall said.

Doctors told Nuttall that his brain’s neural pathway needed something to help stimulate and redirect its growth.

“(Following the accident) they were picking parts of my skull out of my frontal lobe. There was some pretty serious trauma there. Because of the trauma, some of the neurons were destroyed,” he said.

According to an article in the Anxiety Resource Center webpage written by Registered Nurse Betty Houtman, crocheting helps distract the mind while helping it to grow new brain pathways.

The ongoing “repetitive, rhythmic movement” of the hands while crocheting helps calm a person. Thanks to that repetitive movement, extra serotonin is released, thus improving moods while decreasing stress. The colorful yarns and textures also provide “pleasing tactile and perceptual feedback” to the mind, Houtman wrote.

In January of 2015, Nuttall suffered his accident while working as a long haul truck driver when he hit black ice and crashed his tractor-trailer not far from Butte, Montana. He later wound up in a Billings, Montana, hospital where surgeons spent three hours rebuilding his forehead. He also stayed three days in the hospitals Intensive Care Unit spending a total of eight days in the Billings’ hospital.

“During the accident, my forehead was crushed. I had a fracture above my left eye. My upper jaw was fractured below my left eye. I had a temporal bone fracture behind my left ear,” he said.

Nuttall also suffered bruising around his brain and broke his nose. He also lost his sense of smell and 95% of his tasting ability, he said.

“Sweet or sour, bitter or salty that I can taste, but that’s it,” he said.

Nuttall spent the next five days in the hospital where he slept 18 hours a day. That apparently helped him heal quickly causing amazed doctors to nickname him “Wolverine” — a fictional character who had powers to quickly recover from any injury.

“They had no medical reason why I was healing so fast. It’s kind of cool,” he said.

When he’s not crocheting, Nuttall, the single father of three, works at the Rexburg Deseret Industries where he’s receiving training in software installation. He plans to eventually attend Brigham Young University-Idaho to earn a computer science degree with an emphasis on blockchain development.

Yes, the phrase blockchain “sounds like a crochet stitch,” but it is instead the wave of the future involving computers, Nuttall said.

As for crocheting, Nuttall’s work at Deseret Industries gives him access to lots of cheap yarn providing him ample opportunity to continue healing via crocheting, he said.

Nuttall realizes that crocheting isn’t something that most men do, but that’s OK, he said.

“As far as the manly man stuff, my manly man card would have been taken away years ago,” he joked.

Crocheting is for everybody and especially those recovering from a brain injury, Nuttall said.

“Crocheting does sooth the soul — that’s a very good way to put it,” he said. “It’s just fun. Crocheting has probably actually saved me in many, many ways — from healing from the traumatic brain injury itself to my mental health to giving me something productive to do and a way to serve and volunteer. It’s a hobby that’s literally saved me in several ways,” he said.