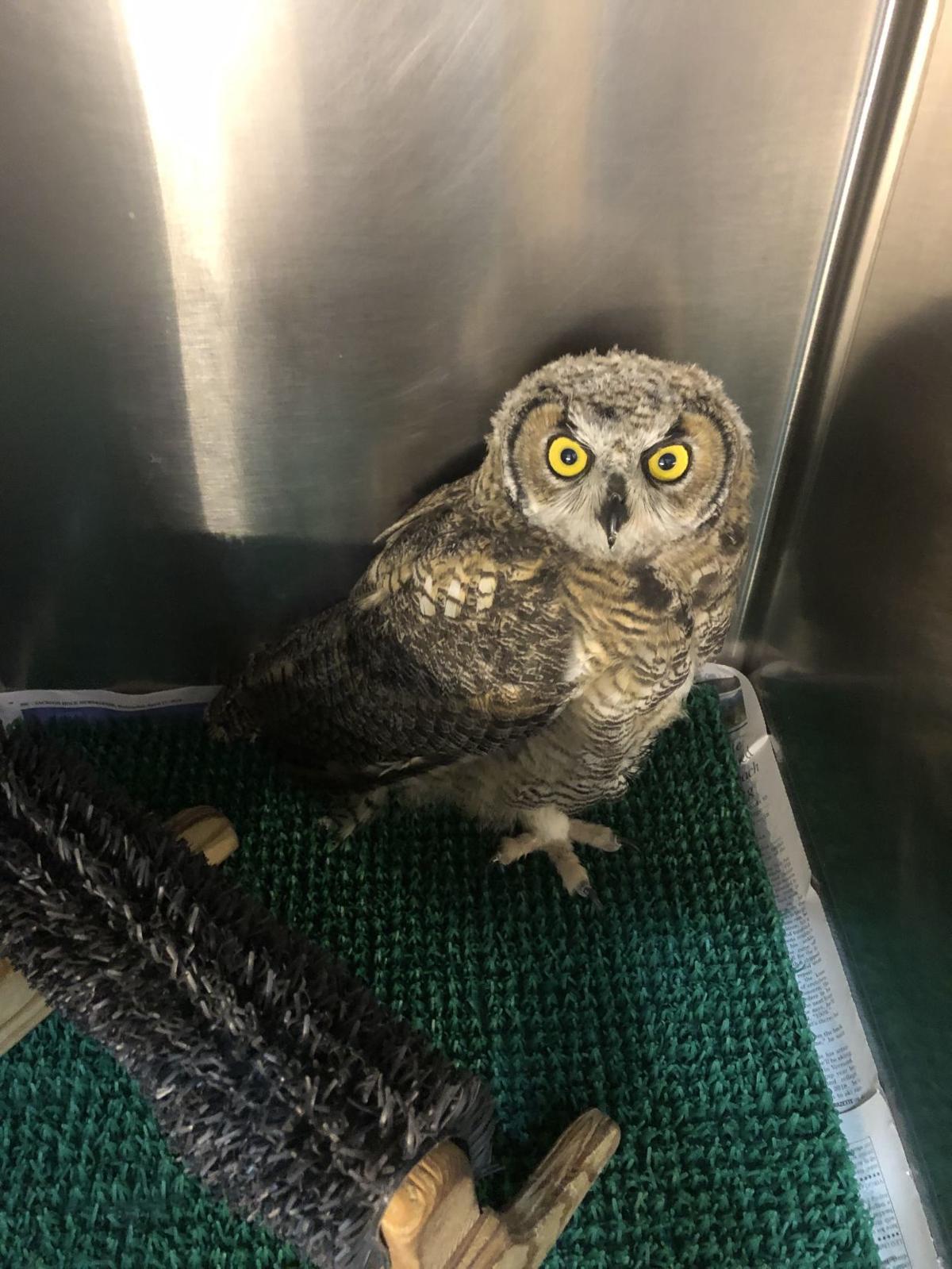 The young owl at the Teton Raptor Center. 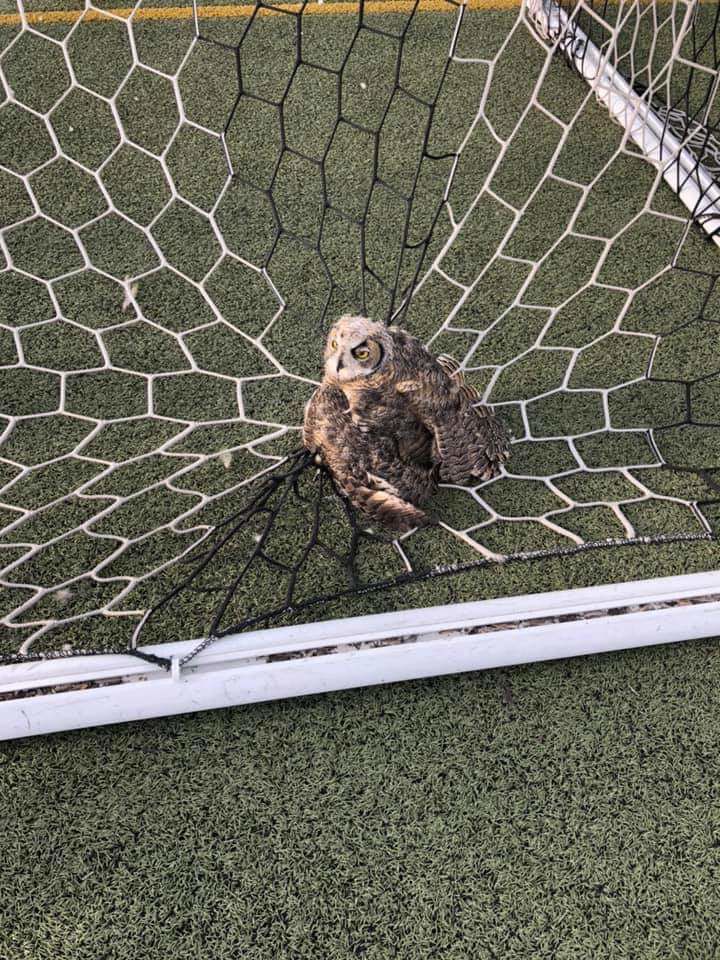 The young owl while stuck in the soccer net. 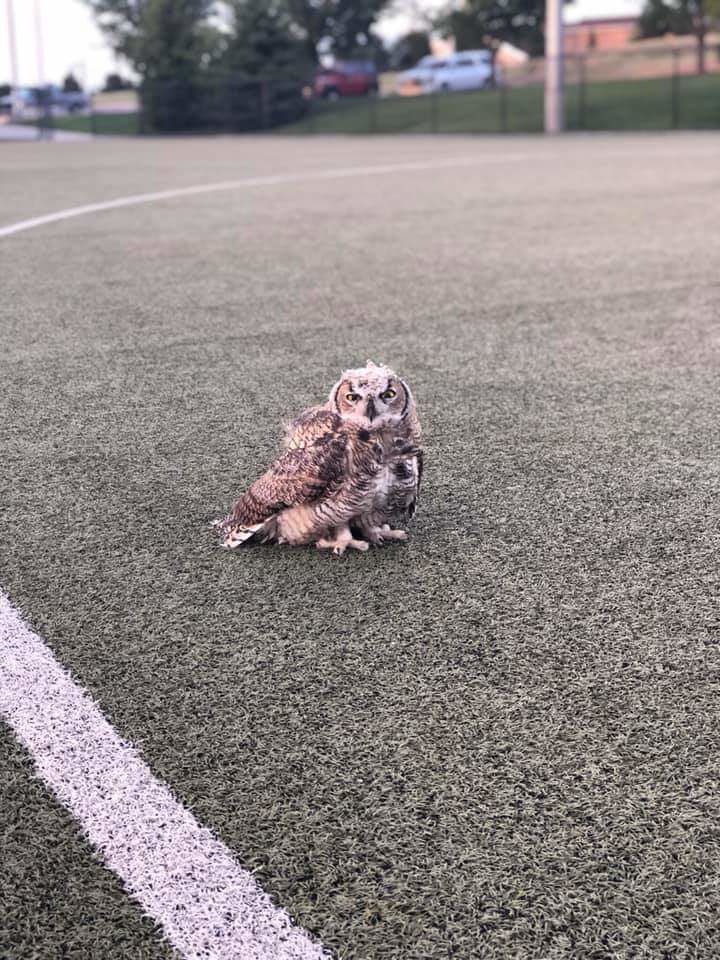 The young owl after it was taken out of the net.

The young owl at the Teton Raptor Center.

The young owl while stuck in the soccer net.

The young owl after it was taken out of the net.

REXBURG — Abby Johnson and her husband were on a date at the soccer fields above the Brigham Young University-Idaho Campus when they noticed something in the soccer net. It was a small owl struggling to free its wings.

“We went to the soccer field on Monday and kicked a goal and missed and then we saw something moving and that’s when we noticed an owl was stuck in the net,” Johnson said.

She said her husband called the City of Rexburg who then told him that animal control was unavailable and that’s when they called Idaho Fish and Game and talked to IDFG official Spencer Wesche.

“We felt so bad,” Johnson said about the small creature. They stayed by its side holding the net trying to keep it from moving. The wind would blow the net and the net would tug on the owl’s wing.

“We sat with the owl for 30 minutes,” she said. “Wind was pushing on the net and pulling on the net. It would blow forward and we tried to hold the net to help him. He looked so angry.”

Then Johnson said Wesche arrived on scene. “She put gloves on and tossed her jacket on to the owl to block its beak and talons,” Johnson said. “We called the school to make sure it was OK to cut the net and they said yes. She was awesome! She had on no long sleeves, she just went for it.”

Johnson asked Wesche if there was a special technique they used to get an owl out of the net and Wesche told her no, that she just had to go for it and get the owl out safely and quickly.

After the owl was out of the net, its left wing was injured and it couldn’t fly away. Idaho Fish and Game then contacted the Teton Raptor Center in Wyoming, about an hour and 45 minute drive from Rexburg. Currently those from the Teton Raptor Center and Idaho Fish and Game are trying to get the young owlet reunited with its parents, once it recovers.

Sarah Ramirez, an official from the Raptor Center, said the owl is doing great. They received the animal for treatment on Tuesday around 6:30 p.m. at that he is standing, alert, and very aware of his surroundings, all of which are good signs.

“We took some X-rays and looked at his wings and he had a lot of swelling near his armpit and shoulder region, which is where he was probably caught in the net,” she said.

She said that the swelling has gone down significantly and will be able to reunite with its parents in a healthy and happy condition once fully healed.

She described Steve as “a toddler” at about three months old. Ramirez mentioned the owl is at a good body weight at 800 grams and that his parents must have taken very good care of the bird before it landed in that soccer field. She said they haven’t determined the sex of the bird because at that age it’s difficult to tell, but that he is fully grown for a great horned owl and that all but the feathers on his head are adult feathers.

She said that it’s important that the young owl learn important life skills from its parents and should be reunited with them as soon as possible. The owl was most likely trying to learn flight skills when it was caught in the net.

“These injuries aren’t severe, we’ll need to reunite the bird,” Ramirez said. “The sooner the better. We don’t wanna take away any lessons from the parents.”

She said that he isn’t eating normally yet because he’s afraid and uncomfortable but she hopes that he will start eating soon.

She said it can be overwhelming because he’s being handled by predators, humans.

“He’s used to being fed by parents that look like great horned owls,” she said. “It’ll take a while for him to start self eating but he hasn’t started yet.”

Ramirez said the owl’s care is going to cost about $45 for his short-term care at their facility.

“His care, even with just a short time with us, will cost about $45, between medications, supplies, food,” she said. “This is not including our agency partner’s time spent retrieving the bird!”

Ramirez said if somebody finds any odd acting wildlife, to phone the raptor center and Idaho Fish and Game before bringing them anywhere else.

“This is a great case of a baby that needed to come in for care,” she said. “But most toddlers can look injured because they’re clumsy and good samaritans can bring them in and what they’ve done is kidnap them by accident. Please call us first!”

For those who think they might have found an injured bird or owl, contact Ramirez at the Teton Raptor Center at 307-203-2551 extension 1. If anyone would like to donate money to the Raptor Center or learn more about what they do, visit their website at {a id=”LPlnk284682” href=”https://tetonraptorcenter.org/” rel=”noopener noreferrer” target=”_blank” data-auth=”NotApplicable”}https://tetonraptorcenter.org/{/a}