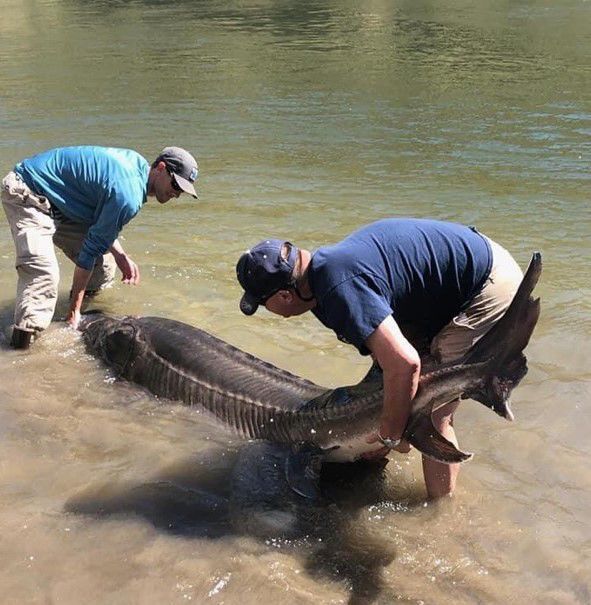 Ryan Rosenbaum, left, holds the nose of a Snake River white sturgeon he caught last month. Rosenbaum has landed the monstrous fish in four of the last five years. 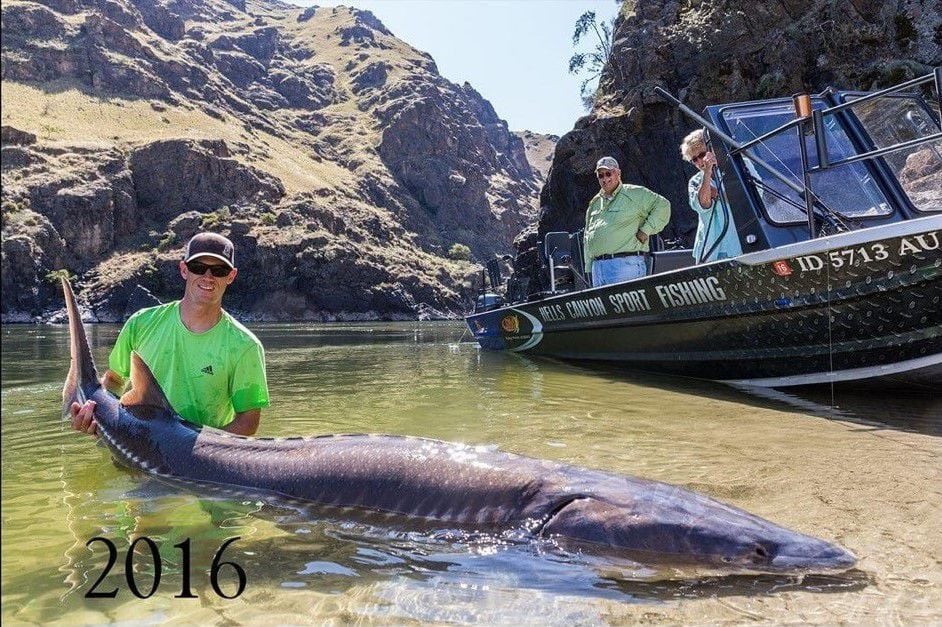 Ryan Rosenbaum holds the tail end of a monstrous Snake River white sturgeon he and two clients first caught in 2016.

Ryan Rosenbaum, left, holds the nose of a Snake River white sturgeon he caught last month. Rosenbaum has landed the monstrous fish in four of the last five years.

Ryan Rosenbaum holds the tail end of a monstrous Snake River white sturgeon he and two clients first caught in 2016.

After fighting a 10-foot-plus, approximately 500-pound prehistoric monster for more than two hours in 90 degree heat, a Lewiston fishing guide who grew up angling in Southeast Idaho recently landed the biggest fish of his life — for the fourth time.

“She was like a swollen oak wine barrel,” 38-year-old Hells Canyon Sport Fishing guide Ryan Rosenbaum said when describing the monstrous Snake River white sturgeon he caught, again, last month. “Just absolutely huge. It was more than 2 feet longer than my 8-foot Lamiglas sturgeon rod and thicker than any fish I’ve ever seen in 17 years of guiding.”

Rosenbaum recently became, as he his long time clients put it, “Facebook famous” after a 4-year-old photo of him holding the estimated 10-foot, 5-inch, fish went viral on the Idaho Master Angler Facebook page on July 9, racking up over 3,300 shares and more than 2,400 reactions and comments as of Tuesday.

Though the photo that went viral was from 2016, Rosenbaum has caught the same fish at least once annually since the photo was taken, excluding 2019.

Idaho’s catch and release only regulations for sturgeon make it illegal to remove the fish from the water, but had Rosenbaum documented the official measurements for this river monster of a catch, it would have likely broken Idaho’s existing record set in 2016 of 117 inches by more than half a foot.

“A lot of people were asking, ‘Hey, how come you don’t enter that into the Idaho records book?’” said Rosenbaum, who grew up in Nampa and fished Henry’s Lake northeast of Island Park as a child. “But we were just kind of in the moment. We did measure her, but honestly, I’ve been guiding a long time and I don’t even know what the record is. She would be right up there though.”

Catching a fish bigger than three beer kegs is typically not a feat people get to experience more than once in a lifetime, but for Rosenbaum, he said this is the fourth time he’s landed this specific fish, and she was at her largest this year.

“When they’re that big, you just know,” Rosenbaum said when asked how he knew this was the same fish he’s caught four out of the last five years. “There are not very many fish that big. Until you get to fight this type of fish you really don’t realize how fun they are.”

After launching from the Heller Bar south of Lewiston, Rosenbaum hooked this sturgeon north of town near Hells Canyon. He said it pulled him and his crew about 2 miles down river.

White sturgeon are the largest North American freshwater fish. They can live to be over 100 years old and have survived relatively unchanged for 200 million years.

They inhabit large rivers of the Pacific Northwest from central California to southwest Alaska. The Snake River population in Idaho is found in the Snake and Salmon rivers. In the Snake River, sturgeon range upstream to Shoshone Falls and have also been introduced below the American Falls dam.

The largest verified record was a 1,387 pound fish caught in 1897, according to the Idaho Fish and Game Department. Other unverified records approach 2,000 pounds and 20 feet in length.

Sturgeon spend their time blindly foraging for food by sucking up morsels from muddy bottoms with their tubular underslung mouths, sensing shells, crustaceans and small fish with two pairs of barbels. Rather than shiny silver scales, they’re encased in a tough, armor-like skin of ancient design.

“These are one of the more under appreciated fish,” Rosenbaum said. “People think they are just these big suckerfish, which they are, but they’re acrobatic and behave just like a freshwater tarpon basically. They truly are a magnificent fish.”

Finding the fish is more than half the battle but using the right gear makes all the difference, Rosenbaum said. He landed this sturgeon using 200-pound braided line and an 8-foot sturgeon rod rated at 20- to 80-pound test.

“I used Shimano 800 levelwind reels and a ten-knot Gamakatsu Octopus hook with a 12-ounce chunk teardrop sinker,” he said. “We use different baits but I think I caught her on a bass head.”

What’s unique about the saga Rosenbaum has shared with this prehistoric fish is that it began with two longtime clients in their 70s who he only identified as Tom and Joan. Tom lost one of his arms when he was 2, Rosenbaum told the Spokesman Review in 2016.

“We probably didn’t hook this fish until 10 or 11 in the morning,” Rosenbaum said when describing the first time he landed this fish in 2016. “I hooked it and handed it off to Tom who was able to fight it for a few minutes before handing it off. After two and a half hours we got her to the boat. She probably jumped five or six times and gave 'em a good show.”

By chance, a friend of Rosenbaum's, Joe Anderson of Lewiston who owns Lucidity Photography, tagged along in 2016 to deckhand. Rosenbaum said he specifically invited Anderson along to take photos of Tom and Joan to commemorate the excursion at their request.

“That day was so special because Joe is a professional photographer who knows the angles and the colors,” Rosenbaum said. “Everything just sort of popped and made everything special. That, and Tom and Joan have been fishing with me for 16 years. We literally couldn’t repeat this day if we wanted to.”

With Rosenbaum’s luck, however, he’ll likely only have to wait until next year rolls around.