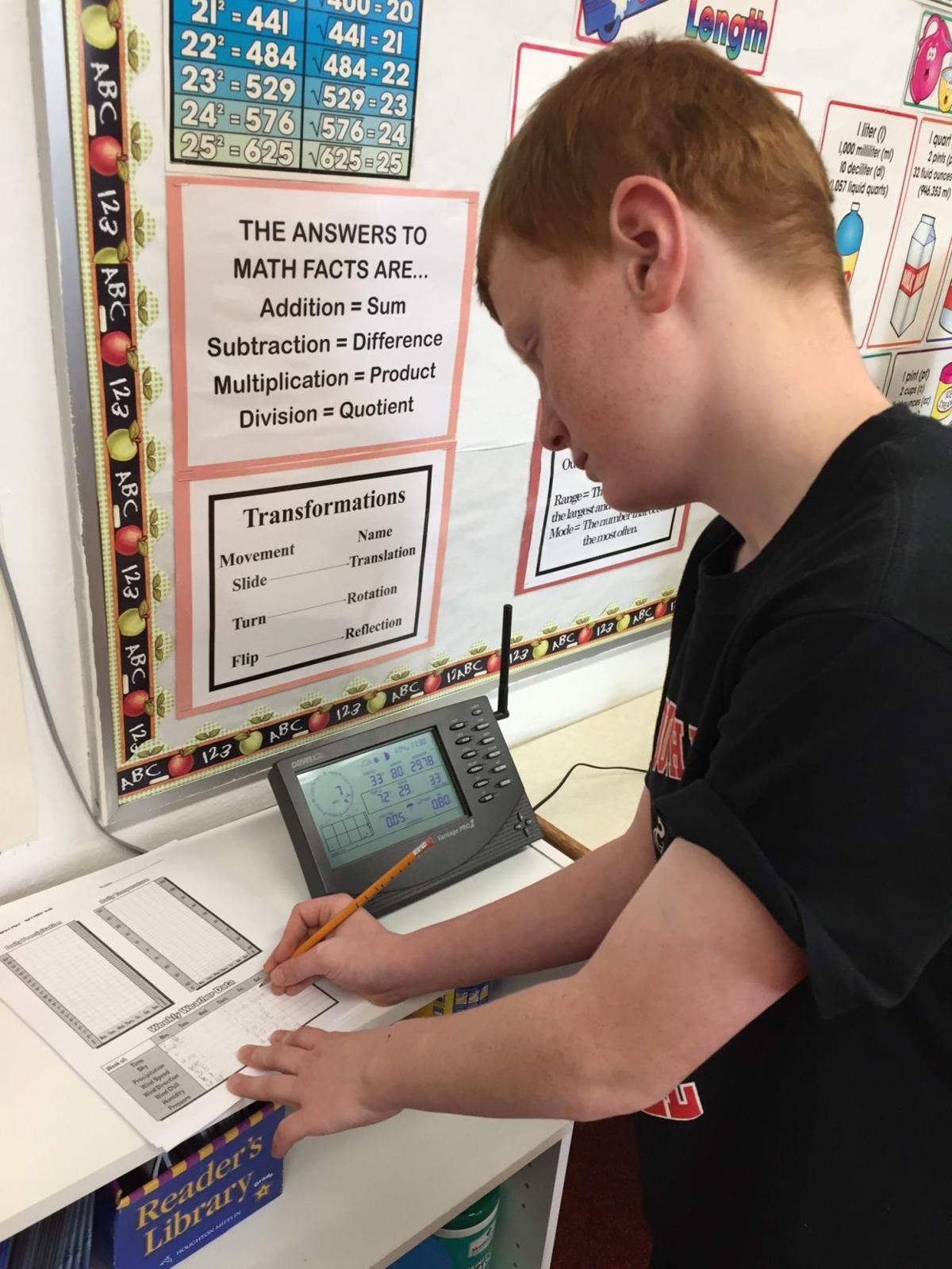 Teague, a student in Rondee Owens’ fourth-grade class at Parker-Egin Elemenary School, records the weather report for the day. 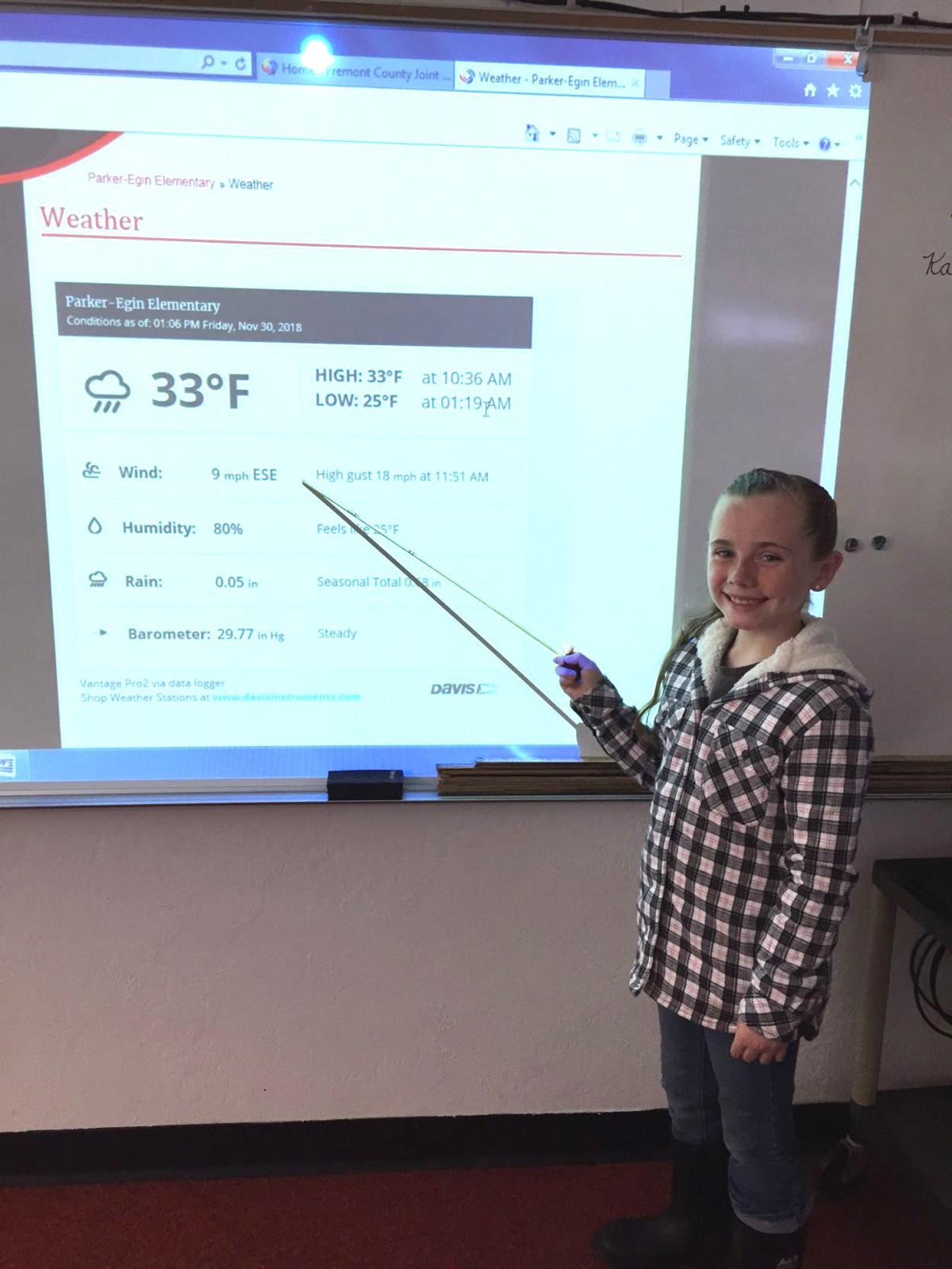 Taylor, a fourth grader in Rondee Owens’ Parker-Egin Elementary School, shows her fellow classmates the weather report displayed on the school’s webpage. INL gave Owens nearly $2,000 in grant funds that helped her buy a weather station and other equipment to provide a daily weather report in the community.

Teague, a student in Rondee Owens’ fourth-grade class at Parker-Egin Elemenary School, records the weather report for the day.

Taylor, a fourth grader in Rondee Owens’ Parker-Egin Elementary School, shows her fellow classmates the weather report displayed on the school’s webpage. INL gave Owens nearly $2,000 in grant funds that helped her buy a weather station and other equipment to provide a daily weather report in the community.

Owens applied for and received a grant for $1,494.92 earlier this school year, and from there, Owens used the money to purchase a weather station that school technology workers placed on top of the school.

“It has a thermometer. It tells humidity, the barometer and the barometric pressure. Yesterday it said, “quickly falling,” which meant the snow was coming in. It tells how fast the wind speed is and the direction and daily rain totals. It’s keeping track,” she said.

Owens also bought equipment that hooks up to the internet and gives students and the community access to an ongoing weather report.

“I think it’s a good learning opportunity. I just think doing hands-on things are good. A lot of kids learn that way,” she said. “It’s just a really good opportunity for them to learn something hands-on instead of just having to hear it from book. They can understand the weather better than they did before.”

Each week, Owens assigns a student to be the “weather person of the week.”

“They write down all the readings on a chart. It’s been good,” she said.

“We do graphs and keep track of things. We do all kinds of activities with it,” Owens said.

One of those activities is finding out how cold it is outside.

“We have to keep a really close eye on the temperature to see if it’s safe for the kids to go outside for recess. We follow the weather really close in the wintertime,” she said.

Owens said that her young students seem to really enjoy keeping track of all that weather information.

“I think they like it. We’re learning together,” she said.

Wright’s student Kaleb, 9, says he likes sharing the weather information with the community. He noted everyone in the class has a task each day.

“There’s a job for weather at the end of the day. We check the weather and list it,” he said.

“It’s cool. I think it’s fun to be able to tell what the weather is. It’s just cool to be able to share it with the community,” he said.

Owens opted to purchase a weather station, as she’s always been interested in what Mother Nature has in store for the region. Owens jokes that she should have been a “weather woman.” She said her mother had a weather station at her Vernal, Utah, home for many years and routinely sent in weather reports to her grandson, a Salt Lake City meteorologist.

“She was obsessed with the weather. Weather runs in our blood,” she joked.

This is the fourth grant that Owens has been given from INL. She has received three other grants that were $500 each with this most recent one being the largest she’s received to date. The grants have provided some sturdy microscopes and the opportunity for “a lot of hands-on STEM activities for math and science.”

Owens routinely receives emails from INL notifying her of grants she could possibly apply for.

“I just thought, ‘I’m going to try for this,’ but I got it,” she said. “It’s just enhanced the learning in our little classroom. It’s been nice for fourth graders,” she said.

For each grant, INL requires that Owens create a budget and a justification for each item purchased.

“I have to describe the technology and how I’m going to integrate it into my classroom. I describe a student connection and STEM goals and objectives,” she said.

Owens has taught at Parker-Egin Elementary School for all of her 24-year teaching career. She has taught fourth grade and taught out of the same room for all that time.

“Fourth grade is fun to teach,” she said.

Some of Owens’ students are the children of those students she taught during the beginning of her career. Owens enjoys teaching and always hopes the best for her young charges as they venture through the school system and later on to adulthood.

And, perhaps, someone might become a weather forecaster because he or she was in Owens’ class.

“A lot of activities trigger something in them. Maybe, one of these days, one of these little kids will become a meteorologist,” she said.