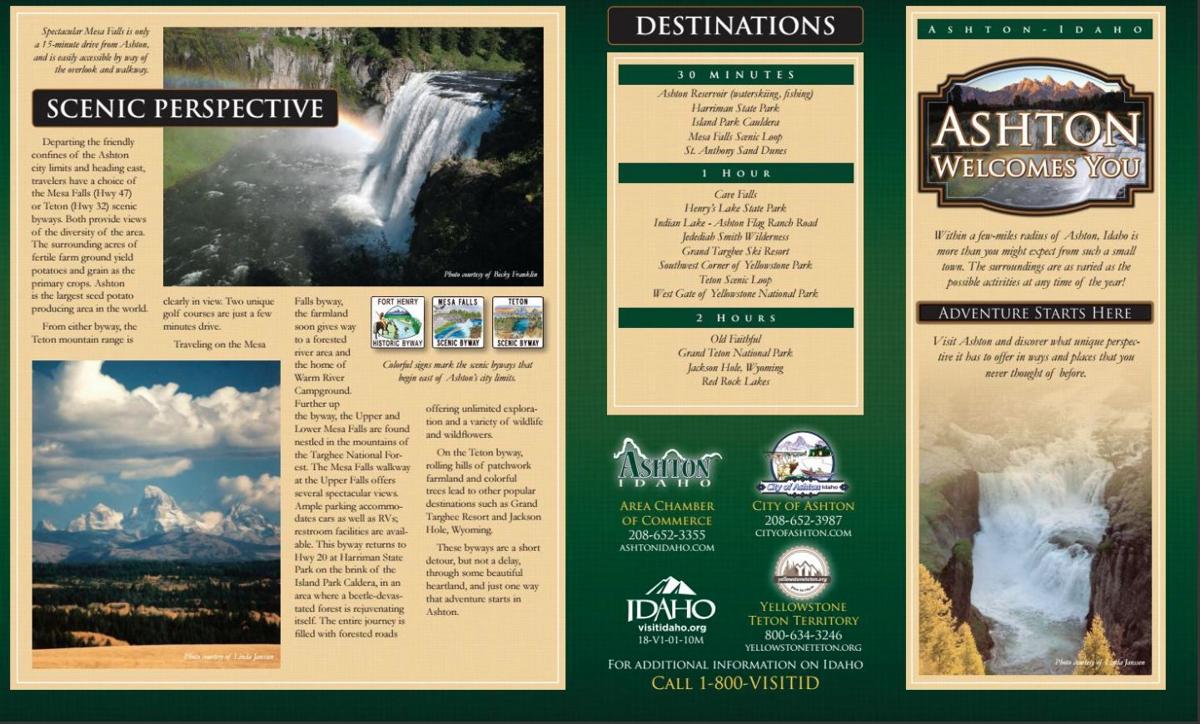 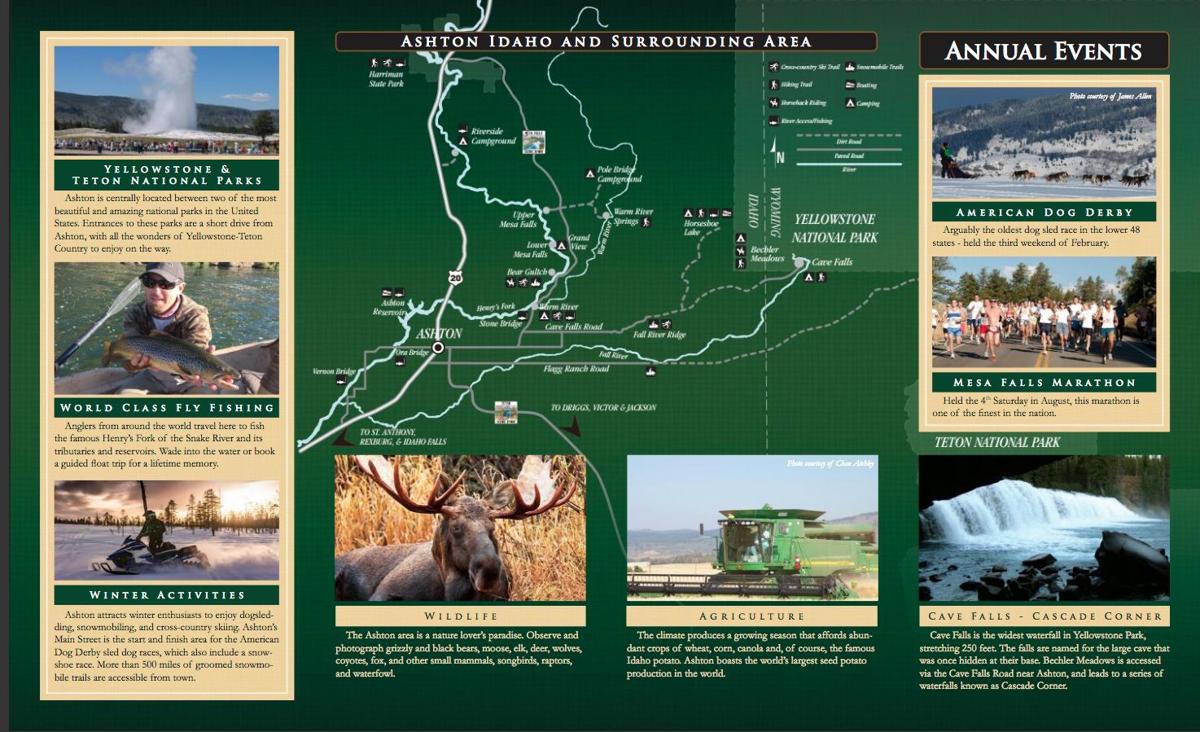 “I love this area, and I’ve been involved with the Chamber of Commerce for a long time. That’s kind of a passion that I have to promote the area,” he said. “There’s a lot to promote.”

Across the front of the brochure, Amen placed the city’s logo “Adventure Starts Here.”

“Within a few miles radius of Ashton, Idaho, is more than you might expect from such a small town. The surroundings are as varied as the possible activities at any time of the year,” says the pamphlet.

The pamphlet notes those varied activities include everything from fishing to snowmobiling to visiting national parks.

Nestled in the heart of Fremont County, Ashton is just a 30-minute drive from Harriman State Park, the Island Park Caldera and just an hour from Henry’s Fork.

“You can’t understate the fishing. The second you can get a boat in the river, we have people crawling all over pulling their boats around to get into the Henry’s Fork. It’s one of the biggest things we’ve got going from a tourism perspective that is,” Amen said.

Highway 20 brings the world to Ashton as travelers make their way to famed landmarks such as Yellowstone National Park and Teton National Park. The hope is that tourists will stop in Ashton before continuing on, Amen said.

“We want to get them off the highway and to come into Ashton to check out Mesa Falls and all that kind of stuff,” he said.

“Further up the byway, the Upper and Lower Mesa Falls walkway at the Upper Falls offers several spectacular views,” reports the brochure.

The brochure also notes the breathtaking view of the Tetons that can be found while driving down either Highway 47 or Highway 22.

“On the Teton byway, rolling hills of patchwork farmland and colorful trees lead to other popular destinations such as Grand Targhee Resort and Jackson Hole, Wyoming,” it writes.

Amen has also included a map of the Ashton region inside the brochure in hopes of guiding visitors around.

Also featured in the pamphlet are Ashton’s annual events such as the American Dog Derby held the third weekend of February.

“Ashton’s Main Street is the start and finish area for the American Dog Derby sled dog races which also include a snowshoe race. More than 500 miles of groomed snowmobile trails are accessible from town,” it said.

“This marathon is one of the finest in the nation,” reports the pamphlet.

While in Ashton, visitors may venture to Cave Falls/Cascade Corner.

“The only way you can access Cascade Corner is through Ashton — unless you hike from Old Faithful,” Amen said.

The pamphlet notes the numerous waterfalls located within the region.

“Bechler Meadows is accessed via the Cave Falls Road near Ashton and leads to a series of waterfalls known as Cascade Corner.”

“The climate produces a growing season that affords abundant crops of wheat, corn, canola and, of course, the famous Idaho potato. Ashton boasts the world’s largest seed potato production in the world,” it writes.

The new pamphlet also details the numerous wildlife known to peruse the community.

Amen designed the new brochure and started working on it last summer. He had experience doing so as he made one for the Ashton Chamber of Commerce in 2009 and updated it in 2012. During a recent chamber meeting, it was suggested to do an update of the 2012 brochure.

At about the same time, Ashton City Clerk Kathy Stegelmeier contacted Amen about a new brochure as well, Amen said.

“Cathy was telling me that the brochures — that were done in the early 90s, and that everybody really loved — the city was running out of after I don’t know how many years,” he said.

The Chamber of Commerce and the City of Ashton later joined forces and hired Amen to create a new brochure. The Yellowstone Teton Territory (YTT) also expressed interest in the project and reimbursed both the chamber and the city Amen’s salary.

Initially Amen printed 1,000 of the pamphlets.

“Then YTT said ‘We need to do projects up here to promote the area to qualify to get grant money. The YTT paid for 10,000 brochures to be produced,” he said.

The Ashton Visitor’s Center currently carries Amen’s new brochure. He hopes to have the brochures available at visitor’s center throughout Idaho from Malad to Driggs.

“I’d like to make a day out of distributing these,” he said.