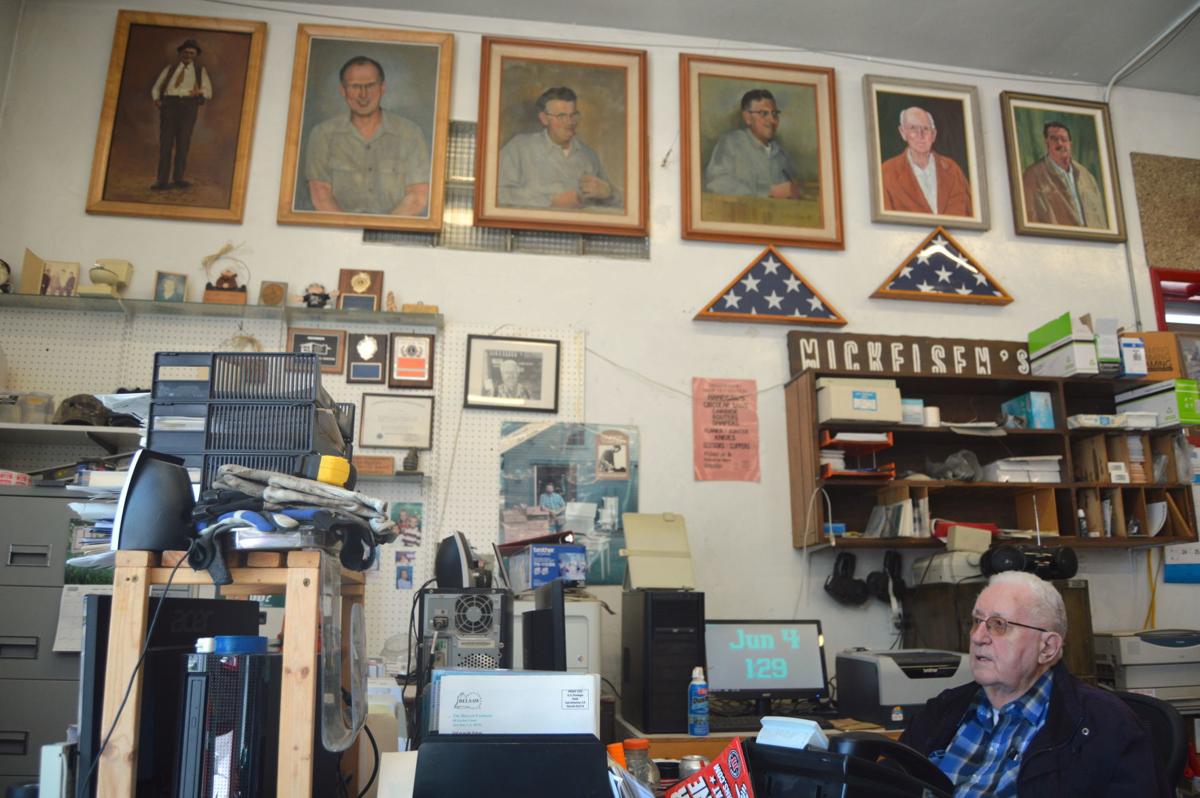 Charles Mickelsen, 81-years old, sitting at his desk. Above him are portraits of his grandfather, uncles, father, and brother. 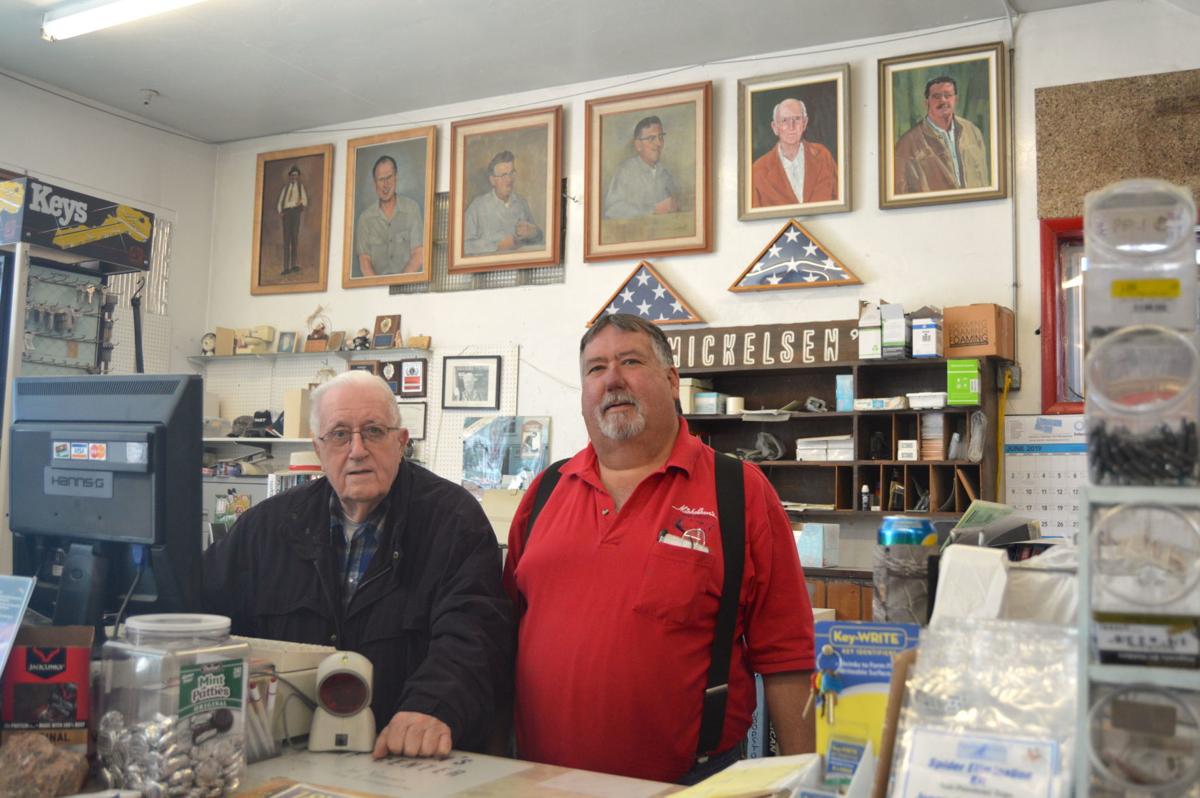 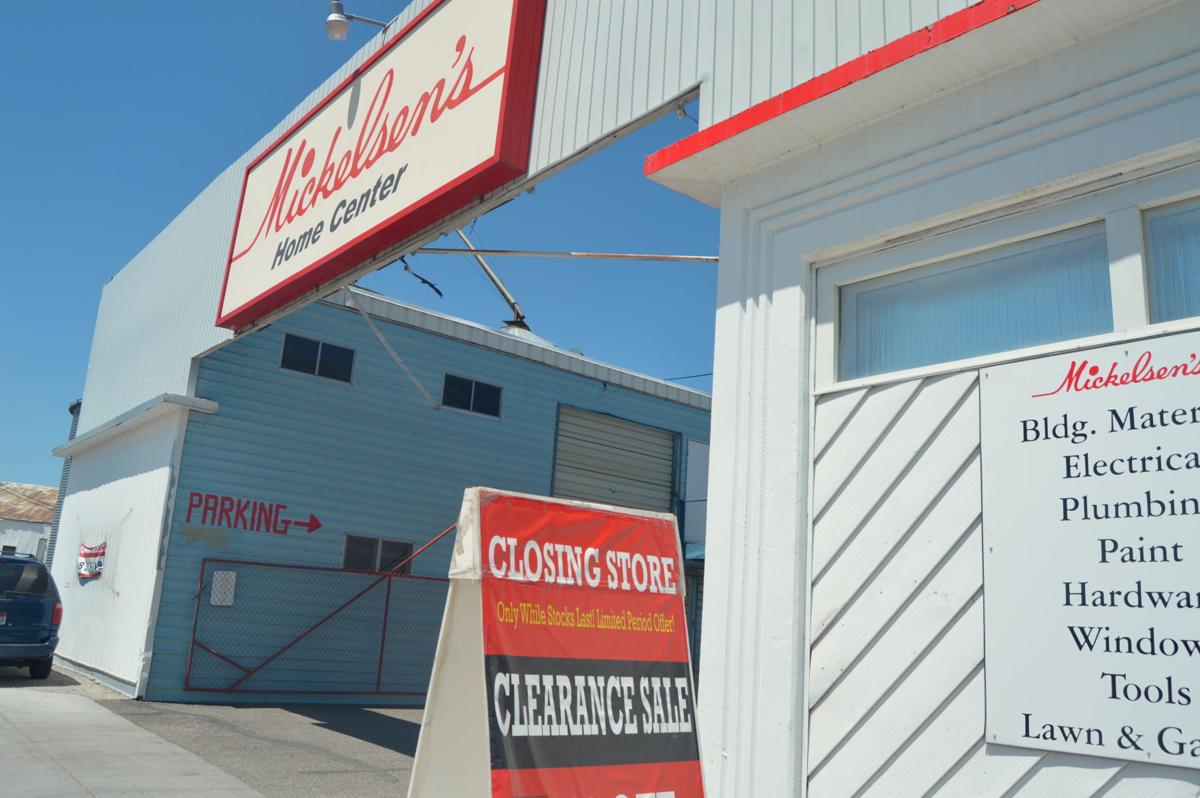 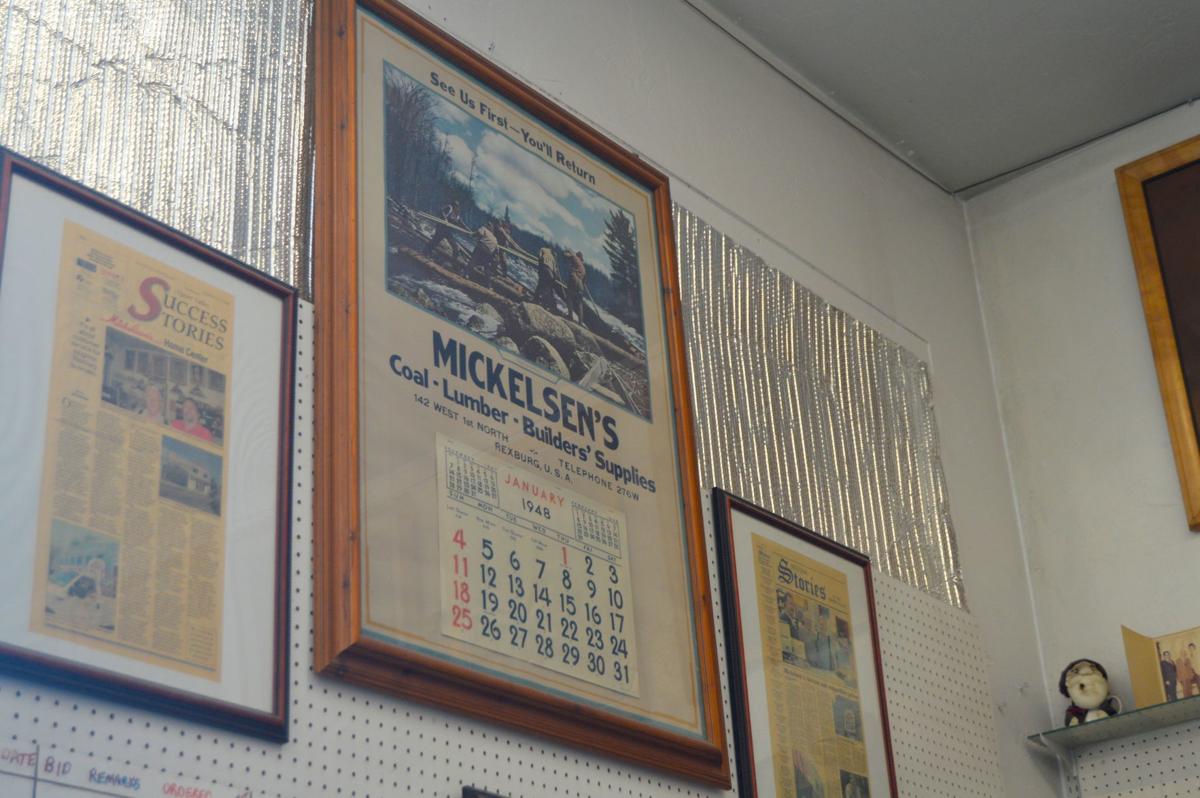 The calendar depicted here was given to the Mickelsens by the Stoddard family who runs Stoddard Lumber in St. Anthony. They brought it to the Michelsens about 14 years ago. It’s an original 1948 Mickelsen’s calendar. It’s a leap year calendar that's never been used.

“It wasn’t the first calendar they ever did but it’s quite old,” Dave Mickelsen said. 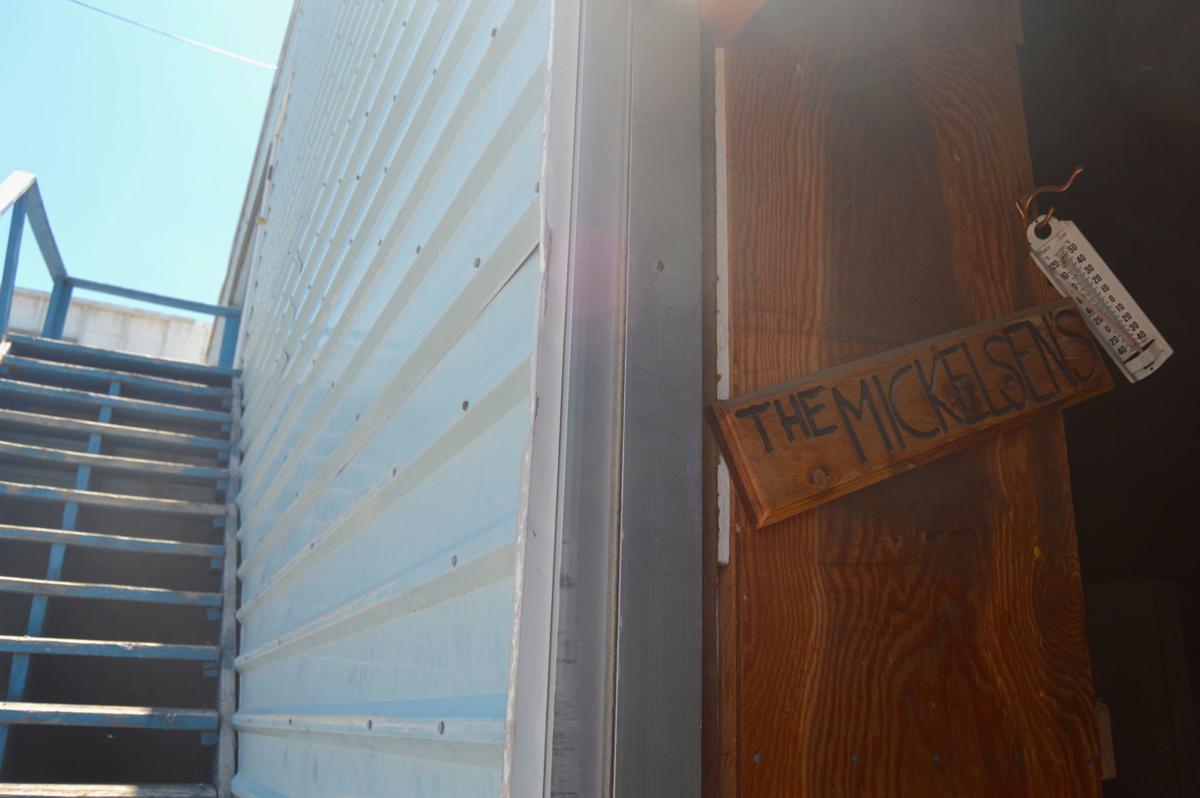 An old sign on the property across the alleyway from the business that reads “The Mickelsen’s”.

Charles Mickelsen, 81-years old, sitting at his desk. Above him are portraits of his grandfather, uncles, father, and brother.

The calendar depicted here was given to the Mickelsens by the Stoddard family who runs Stoddard Lumber in St. Anthony. They brought it to the Michelsens about 14 years ago. It’s an original 1948 Mickelsen’s calendar. It’s a leap year calendar that's never been used.

“It wasn’t the first calendar they ever did but it’s quite old,” Dave Mickelsen said.

An old sign on the property across the alleyway from the business that reads “The Mickelsen’s”.

REXBURG − On June 14, Mickelsen’s Home Center will be closing their doors for good. The store ran by generations of Mickelsen men and women will end after 82 years of business.

The business will be closed permanently. All of the inventory is 20% off and the property is for sale too.

“I don’t know what I’ll do but my next job will have health insurance, I will get a day off, and hopefully I’ll get some kind of vacation days,” Mickelsen said. “Of course It’s hard for me to find a new job when I’m still taking care of this old outfit.”

Dave Mickelsen said he was ready to let the store go.

“I’m ready, the last few years have definitely been a struggle,” he said. “Hopefully I don’t get more gray hairs.”

He said that recent changes caused the business to suffer.

“Now it seems like a lot of the apartments around here are buying online instead of local,” Dave Mickelsen said. “They’re just not buying in the area. And then when the city built the four lane road out in front and then took away my parking lot, that was the nail in the coffin so to speak.”

He said the parking lot they did have is gone and vehicles can be seen racing past the store front.

“We used to have diagonal parking with seven parking spots,” Dave Mickelsen said. “Now we only have two parking spots in front of the store and this road out here is a racing track. It’s not a maximum of 25, it’s a minimum 25 speed limit. They don’t even see the signs.”

Charles Mickelsen, Dave’s father, said that although he’s been retired since he was 60 years old, he still goes in everyday to open shop and get the day started.

When asked if he’s sad to see the business go, Charles said, “Yes, I am.”

Mickelsen’s began in the early 1930’s when Dave Mickelsen’s great grandfather was working at a hardware shop across the street from Flamm’s Funeral Home. After some thought, he decided to create his own store, inviting his four sons to join him in 1937. The building they worked in was the building across the alley way from where Mickelsen’s stands today. That building was destroyed during the Teton Dam flood in 1976, just 43 years ago.

“We used to deliver a lot of coal before the flood, it was the main way you heated houses,” Dave Mickelsen said. “My dad has an old story that after a snowstorm he would always get a call to deliver coal to a house just so they would drive the truck in and plow it out to get the coal delivered. Then the business evolved into more with a lumber yard at the time of the flood and now it’s more a hardware store than lumber.”

At the time of the Teton Dam flood, Charles was running the business with his, then nine-year old son, Dave. Dave Mickelsen said he remembers the flood but doesn’t know if as a child he knew the gravity of what happened.

Charles Mickelsen said that on the day of the flood, he and his two sons were on top of the garage that Charles had just built. From there, they watched the river water wash away farmland, cows, and mobile homes. He said there was a flash and they were gone.

Charles Mickelsen said when the flood happened the streets were full of water. He said he went to leave to their store when someone told him they wouldn’t make it, he replied “just watch me.”

He said the water reached the hubcaps of his pickup truck and when they arrived, their store was flooded with six feet of water and two feet of mud. The windows of their business was washed out with the water and their basement was filled to the brim with mud. The back garage door got knocked out as well, by logs. They had just purchased new lights and lighting fixtures before the flood but when the dam came crashing down all the new lights and fixtures ended up covered in mud.

“[When the flood happened] I was nine years old and I was cleaning nuts and bolts at the front of the store so I’m actually in the video at the Teton Dam museum,” Dave Mickelsen said. “Out at the front of the store cleaning nuts and bolts and we went for miles away to get units of plywood to bring back after the flood, so that was an interesting time. There was actually six feet of water in the store.”

Charles Mickelsen said they would have a truck come in from Salt Lake that would haul out mud from the store. They would spend all day shoveling mud out of the store and by night, they would sit outside in front of the store take a break, talk amongst themselves and then go home to sleep before doing it all over again the next day.

When asked what it was like, Charles Mickelsen just said “a mess.” They had six pieces of property all under water that day.

“To me it didn’t affect me much, I guess I was too young to understand but I know we wore out a washing and drying machine that year at home,” Dave Mickelsen said. “Luckily our house was on the hill so we weren’t flooded, we weren’t homeless.”

“The tough one is I don’t know [who people can go to for fire extinguishers,] we used to do a lot of fire extinguisher service and there’s a lot of people that need that service here in Rexburg and I don’t even know who to send them to now,” Dave Mickelsen said, “besides Idaho Falls.”

With the business closing, the Mickelsen family wanted to thank the customers who kept them going all these years.

“We appreciate the people that have supported us over the years, that have helped us get to 82 years,” Dave Mickelsen said. “Thanks to our loyal customers, unfortunately a lot of them are passing. The newer generation is of different buying habits. Just thanks for the support and hopefully we’ll move on and up.”