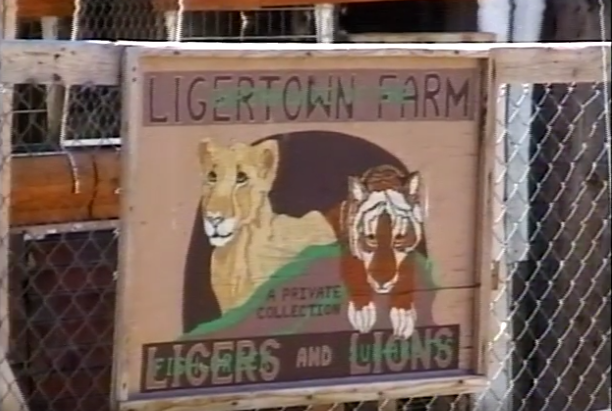 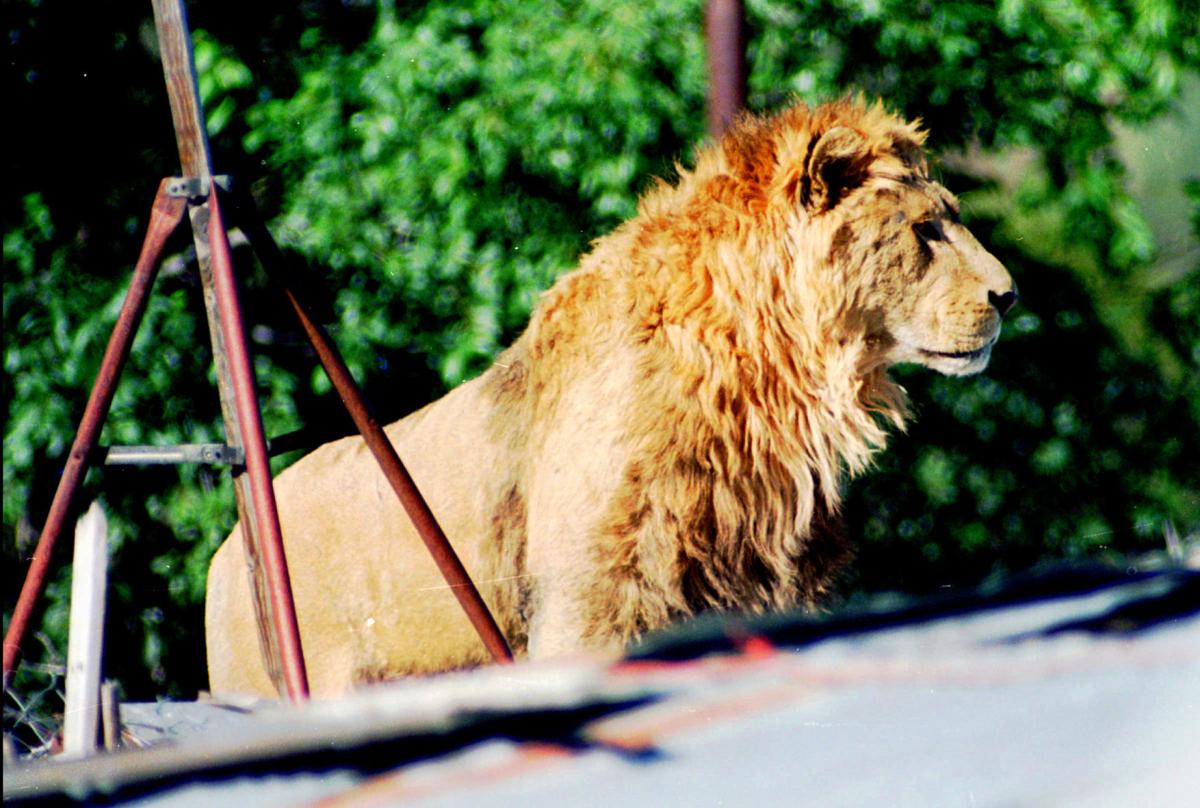 This file photo shows a close up of a male lion standing atop the Ligertown compound in Lava Hot Springs. 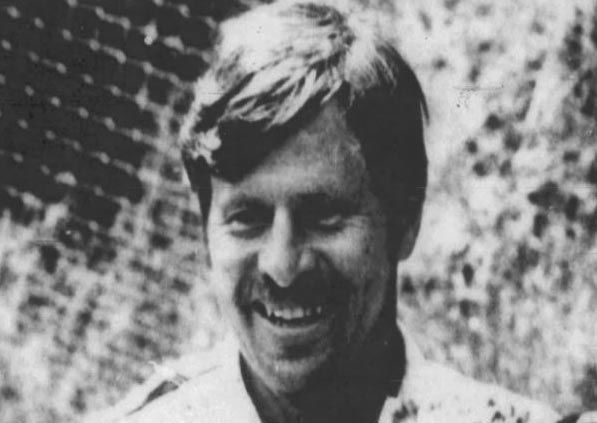 A photo from the Oregon Historical Society shows Robert Fieber in the 1980s. 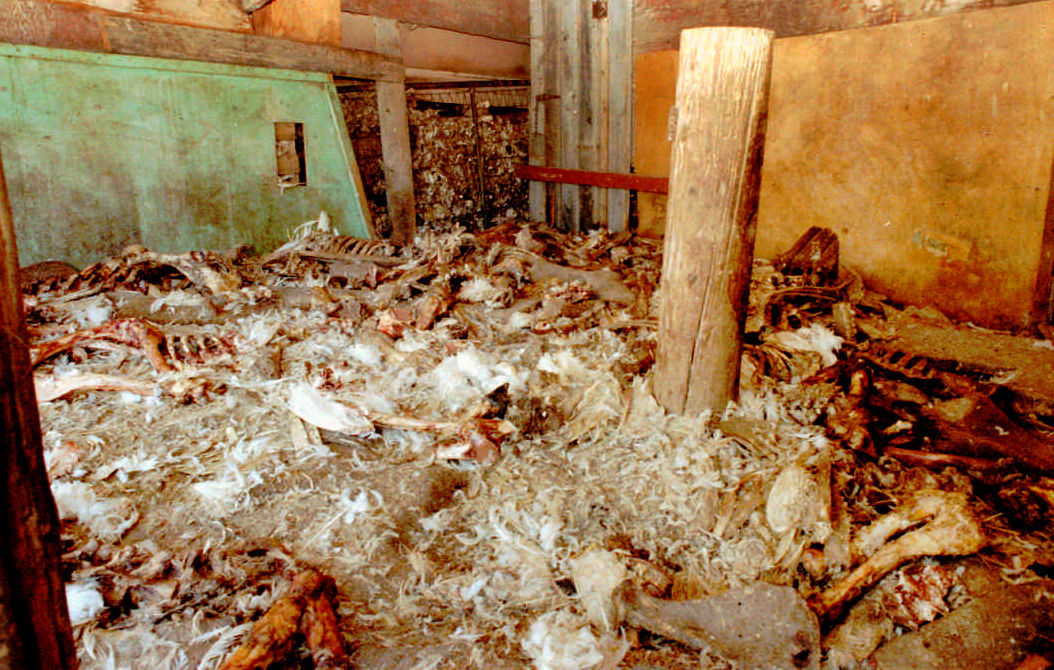 The remains of animals eaten by Ligertown lions and tigers were found at the compound in Lava Hot Springs. 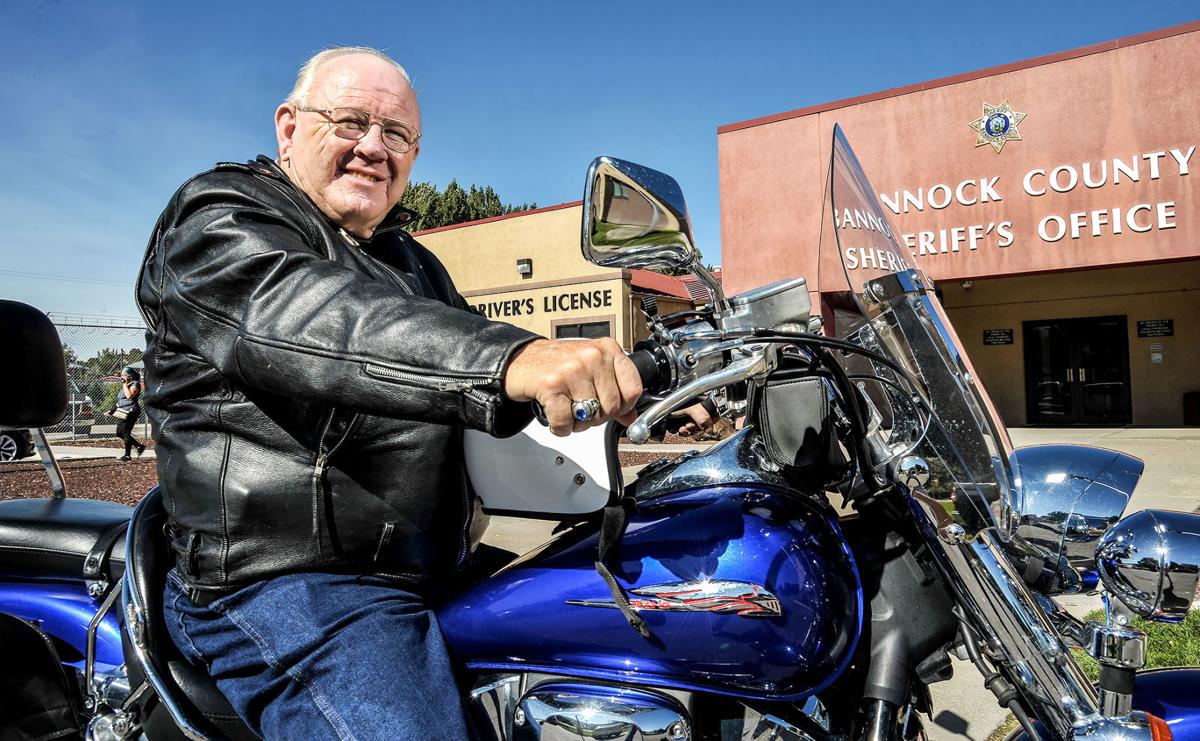 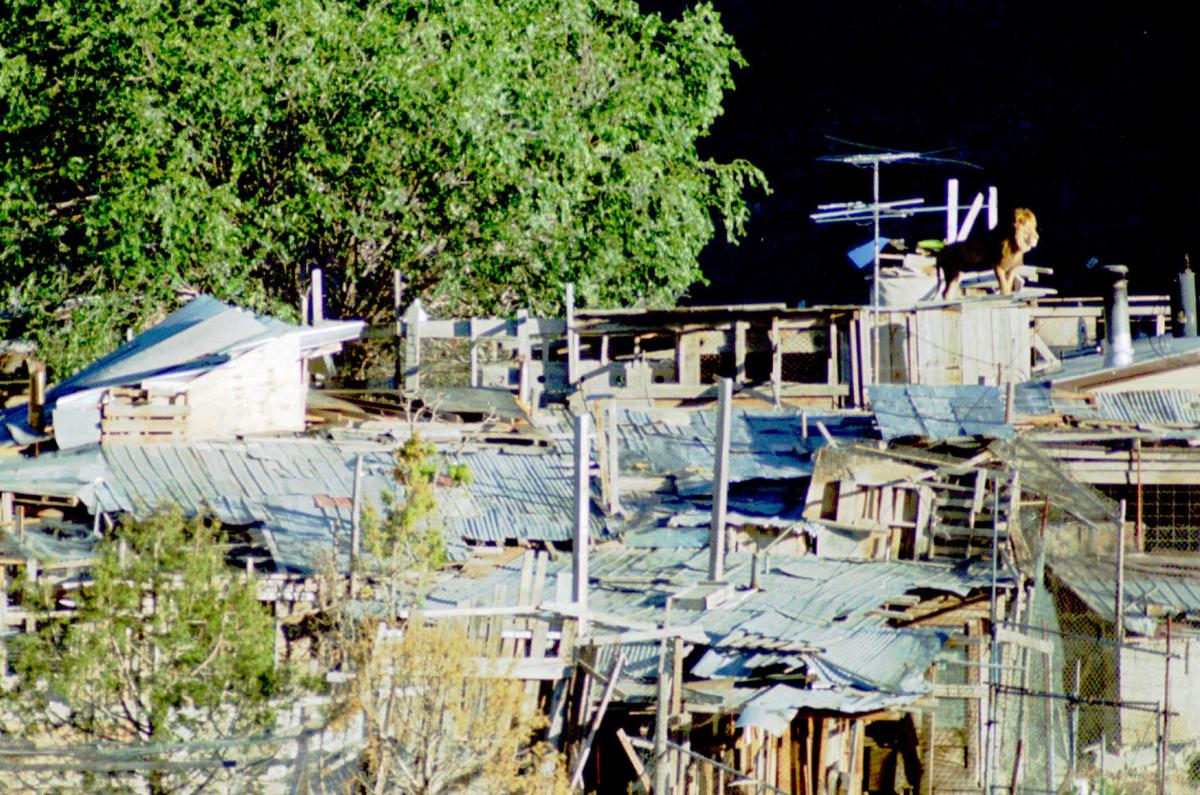 A male lion stands atop the Ligertown compound in Lava Hot Springs in this file photo.

This file photo shows a close up of a male lion standing atop the Ligertown compound in Lava Hot Springs.

A photo from the Oregon Historical Society shows Robert Fieber in the 1980s.

The remains of animals eaten by Ligertown lions and tigers were found at the compound in Lava Hot Springs.

A male lion stands atop the Ligertown compound in Lava Hot Springs in this file photo.

From Cardi B to President Donald Trump, everyone’s got something to say about Netflix’s docuseries “Tiger King.”

The show rolls out a cast of characters that, in turn, both fascinate and disturb. At the center of it all is Joe Exotic, the Tiger King, owner of an Oklahoma roadside zoo where people pay to get up close and personal with his lions and tigers.

Twenty-five years ago, Idaho had its own version of the tale — Ligertown.

“Yeah, I saw ‘Tiger King.’ This was way worse,” said Steve Riedy, an Idaho Fish and Game employee at the time Ligertown was operating on the outskirts of Lava Hot Springs.

The story of Ligertown and the night nearly two dozen lions and lion-tiger hybrids escaped their compound near the sleepy valley town of about 500 people made international news in the days long before Netflix.

Ligertown owner Robert Fieber was an Oregon native who’d spent much of his adult life outrunning the law every time he was busted for his exotic animals. Over the years that included tigers, wolves, cougars, jaguars, bobcats, alligators and ostriches.

With officials from multiple Oregon counties after him for a series of animal neglect violations, Fieber moved on to Idaho.

Fieber first went to Grangeville, where he and wife Dotti Martin kept 15 cats. There, a lion was shot by a neighbor who reportedly found it stalking a horse, according to previous Post Register reports. The pair later moved southeast, settling in Lava Hot Springs, 85 miles south of Idaho Falls. They brought with them a single tiger and two lion cubs. Those cats quickly interbred and multiplied. The result was a strange private zoo called Ligertown.

Years went by and the town watched the Ligertown structure expand. No one knew exactly how many animals the fiercely private Fieber was keeping in there. But the roars were getting louder. The smell was growing stronger. And Lorin Nielsen, chief deputy of Bannock County at the time, was getting more and more anxious that something would go wrong at Ligertown.

On Sept. 20, 1995, something did. Several of the cats escaped their ramshackle confines.

The first lion was spotted at 9 p.m by then-Lava Hot Springs Fire Chief Bruce Hansen. A 2005 Post Register article detailed what happened next.

“She stood in the center of Fish Creek Road, an African lioness. Hansen sped to town, called 911, and grabbed a rifle to protect his livestock from the feline, as far as he knew, the only lion on the loose,” former reporter Milan Gagnon wrote.

“In his absence, LaVenna Long, Hansen’s ex-mother-in-law had come to milk her goats, oblivious to the menace lurking in the night. Her car door hung open. A lion stood near it. ‘LaVenna!’ Hansen called into the dark, catching the cat’s ear, provoking its charge.

“They travel pretty fast,” Hansen told Gagnon a decade later. “I shot him in the chest, and I didn’t know I’d hit him at the time because when he got by me, he jumped past. The lion thrashed in a hillside thicket until it finally died. LaVenna emerged unscathed, now aware of the danger.”

Deputies rolled up to Ligertown to find Fieber fending off an uncaged male lion. Fieber’s face was slashed and bloody.

“What’s going on, Robert?” Nielsen said they asked after shooting the lion and calling an ambulance.

“My babies got out,” Fieber responded.

By the time the sun rose, 15 escaped lions had been shot. Tawny corpses sprinkled the land.

But as morning came, Nielsen realized the Ligertown nightmare was just beginning. Twenty-seven big cats remained alive inside the compound. The place was declared a crime scene; Fieber was deemed no longer capable of caring for his pets.

Law enforcement walked into the compound to assess what it was they were dealing with. The “zoo,” it turned out, was little more than a maze of chicken wire, random sheets of metal and haphazard boards nailed together in ways that didn’t make structural sense. Animal feces were piled five feet high in some places, and bones covered nearly every square foot.

A row of strange signs lined one wall. “Ligertown Church of the Guardian Alien. An Equal Opportunity Cult” read one. “Sacred Bones for Sale,” read another.

Three lions sat unenclosed on the roof of their pens. The lions could not be lured down, forcing rescue operators to walk beneath their watchful gaze as rescuers went into the compound where dozens more lions and ligers waited.

“They were calling out to each other as you would pass into the compound. They had this low, guttural sound that they’d make, and that’s what would wear on your nerves,” Riedy said.

Inside the home, officers found several lion cubs lounging on his bed.

“We just felt sorry that those poor animals had been put in that situation,” Nielsen said.

The rescue operation was difficult. Initially, all the officers had to work with were a few tranquilizers Fish and Game had on hand that were meant for mountain lions. North America’s answer to the big cat, however, is just a third the size of the African lion.

“So they shot him with the dart and then we had to sit there and wait. It didn’t seem like he was going down. … We weren’t sure because his eyes never closed. So here we were, all these idiots, poking him with sticks to see if he was actually out,” Riedy said.

Hoping for the best, officers opened the cage and hauled the lion out by hand. When it let out a loud roar, Riedy jumped and ran so fast that he accidentally kicked the veterinarian examining it. Luckily, the lion had just been talking in its sleep.

Eventually, out-of-state experts came to assist in getting the animals to a California rescue organization called Wildlife Waystation. They were able to tranquilize the animals with better equipment and more accurate doses.

“They had all the (tranquilized) cats laid out with numbers painted on them so they’d know how much time they had to load them up,” Riedy said.

Forty wolf-dog hybrids, Fieber’s other animal experiment, were shipped to Idaho Falls. They stayed at Arrington Farms until another rescue could take them. Male and female wolves were not separated so the pack quickly doubled in size. High school senior Ben David, who lived across the street, was put in charge of caring for them. Each time he left to feed the creatures, his father worried he wouldn’t return alive.

“Protocol was to lock them in the outer pens before entering to clean (and) feed them. But being young and invincible, I never did,” David recalled.

Little did he know, one last lion was roaming the hills on the outskirts of Lava. Five days after the initial incident, local resident Laurie Peters called 911. From the family’s backyard where her 12-year-old son was jumping on a trampoline, Peters’ husband, Woney, had spotted a lion. As the sun was beginning to set, Woney Peters feared if he let the cat out of his sight, deputies would not be able to find the cat in the dark.

“He grabbed his gun, already cleaned and ready to go for a hunting trip he and his son were to take the next day,” Gagnon wrote.

Aiming his rifle, Woney took matters into his own hands.

“I shot, and he took off running up the hill,” Woney told the Post Register in 2005, gesturing toward the mountain. “We couldn’t really see him, and he went into this patch of trees right there and then come rolling down.”

By the time the ordeal was done 18 of Fieber’s cats had been killed.

Like his ligers, Fieber was able to escape too. For all the trouble they caused, he and Martin served no jail time after appealing their charges in court. To this day, animal cruelty is only a misdemeanor in Idaho.

Anyone visiting the site today will see no sign of the bizarre structure that once stood there. It was torn down and torched. Many of those involved in the Ligertown story have died in the years since. Some like Riedy and Nielsen remain to tell the tale.

Nielsen, who became the Bannock County sheriff in 1996 and will retire at the end of this year, still checks in on the cats from time to time. Last he heard, a few Ligertown ligers are still alive.

Only last week, Nielsen drove his motorcycle out to the former location of Ligertown.

“Just to remember,” he said.