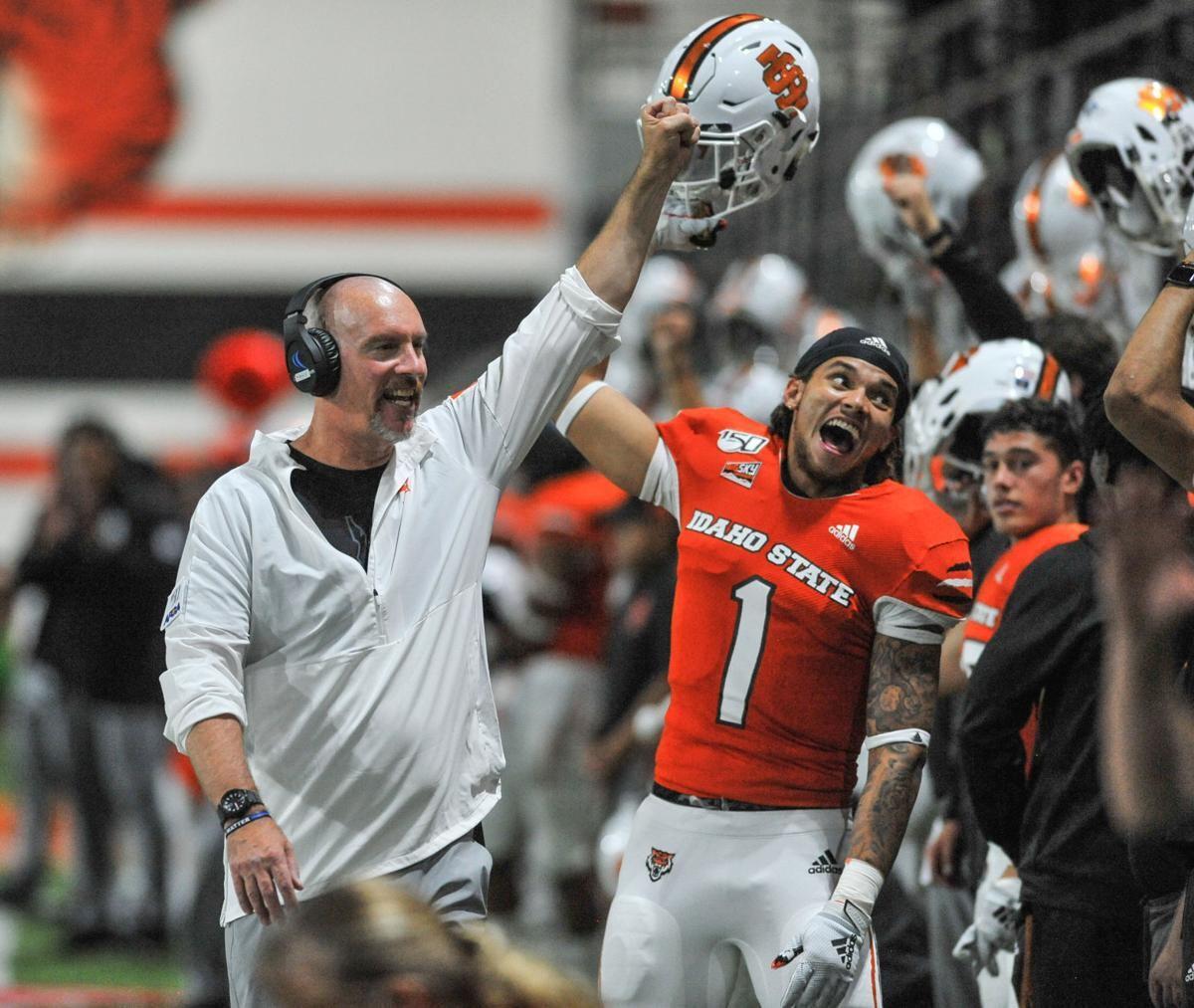 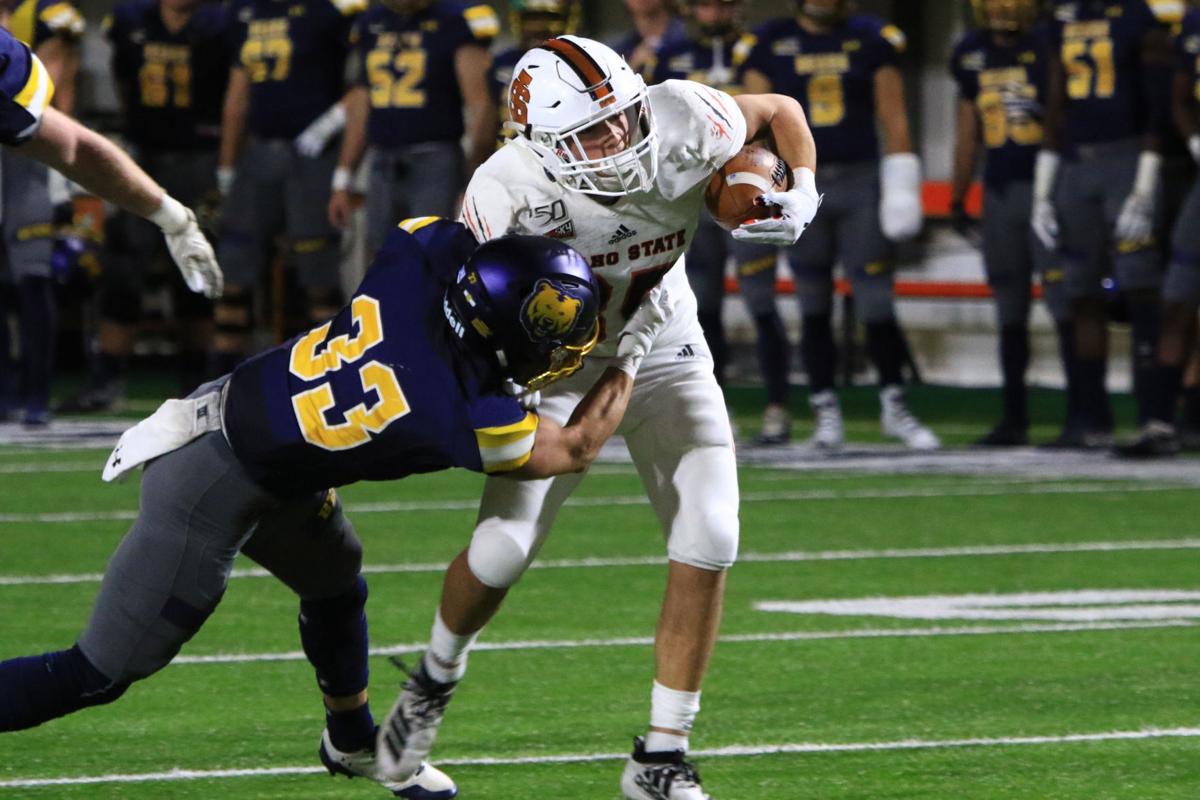 Idaho State running back Malakai Rango gets hit by Northern Colorado’s Aaron Harris (33) during their game Nov. 2, 2019 at Holt Arena.

Idaho State running back Malakai Rango gets hit by Northern Colorado’s Aaron Harris (33) during their game Nov. 2, 2019 at Holt Arena.

Idaho State football has seen its season opener pushed back once already, and the Bengals’ season still hangs by a thread as the Big Sky Conference has not yet made a decision on whether to move forward with fall sports. But in an uncertain year, the Bengals are scheduled to start fall camp on Friday — a week after the original date — and it’s time, at long, long last, to finally start talking a little bit about football. These are the top three storylines for ISU football heading into the 2020 season.

Head coach Rob Phenicie signed a three-year extension during the 2017 season, which means his current contract is up on Jan. 31, 2021. After two years of steadily improving results — and one year of crashing back to earth — it’s difficult to determine what Idaho State will do with Phenicie, who’s going into the final year of his contract with no guarantees of further employment after 2020. That’s interesting enough as is, but COVID-19 introduces further complications. Normally, the coming season would give Phenicie a chance to make ISU athletic director Pauline Thiros’ decision easy — in either direction — but that might not be true anymore. If the Bengals struggle again, how much of that is appropriate to put on Phenicie given the unprecedented conditions COVID-19 has forced on the season? What happens if ISU plays, say, five games amid cancellations and postponements — will Thiros feel comfortable making a decision with such a small sample size? Given the extenuating circumstances and uncertainty around the season, it’s easy to see the two sides agreeing to just run things back for another year when things return to normal, but watch this space. Also, watch Phenicie throughout the season. The former offensive coordinator has never been a head coach before, and while he’s certainly had to coach for his job before, he’s never done it as the head man. If ISU struggles early, will Phenicie be quicker to make changes to the lineup — or, possibly, the coaching staff?

The biggest thread determining Phenicie’s future is, of course, what happens at quarterback. Under Phenicie, when ISU has had good QB play — first with two years of Tanner Gueller, then when Matt Struck started off hot last year — the Bengals look like, at worst, a middle-of-the-road Big Sky team and, at best, a fringe playoff contender. And considering where the program has been for most of the last 40 years, “middle-of-the-road Big Sky team” is pretty stratospheric. But, of course, when Struck struggled in the second half of last season, the Bengals didn’t just look like a bad team — they looked like the worst team in the conference, and confirmed it by losing to the other two contenders for that spot, Northern Colorado and Southern Utah, in games that weren’t even all that close. Sometimes it’s not that simple...but then again, sometimes it is. Phenicie and offensive coordinator Mike Ferriter brought in Wyoming dropdown Tyler Vander Waal in the offseason to be the main contender for Struck’s job. Vander Waal was just about the definition of replacement-level for the Cowboys over a decent sample size, completing 49.6% of his passes, running for six touchdowns and throwing for six more but tossing eight interceptions. It seems likely he’ll be better than that given the step down in competition, but how much better? For that matter, Struck looked like a rising star in the Big Sky through six games a year ago, dicing Portland State and North Dakota.

If he rediscovers that form, maybe the big-armed JUCO transfer is the answer all along. ISU also has a couple redshirt freshmen the coaching staff likes in Sagan Gronauer and Dayne Koch, with Gronauer seeing action when Struck struggled a year ago. Can ISU get above-average quarterbacking from one of those three sources? The answer will go a long way to determining the Bengals’ record.

Going into the 2019 season, ISU had established seniors at nearly every position — two at wide receiver, one at running back, four on the offensive line, two at linebacker and four in the secondary. Of course, that experience didn’t lead the Bengals much of anywhere, and the problem in college football is that if a team has a bunch of long-term senior starters one year, by definition they’re not going to the next year. And that’s where ISU is right now. The Bengals will be plugging in new starters just about everywhere except the defensive line, and will have to craft an entirely new offensive line and secondary. It could be a benefit — Phenicie might have relied on his veterans a touch too much during ISU’s slide last year, refusing to get new blood into the lineup even when the Bengals were losing six games in a row to finish the season. When they did go younger, the coaching staff uncovered a few hidden gems like running back Malakai Rango. This year, they’ll have no choice, and with fewer established starters, competition should be tighter in fall camp. In Phenicie’s fourth year, developing new starters also takes on outsized importance. The large class of senior starters last year were recruited by Phenicie’s predecessor Mike Kramer. This year, the players breaking into the lineup will be mostly recruited — and almost entirely developed — by Phenicie and his staff. At the very least, the level of talent should look pretty similar — if it doesn’t, something’s wrong.