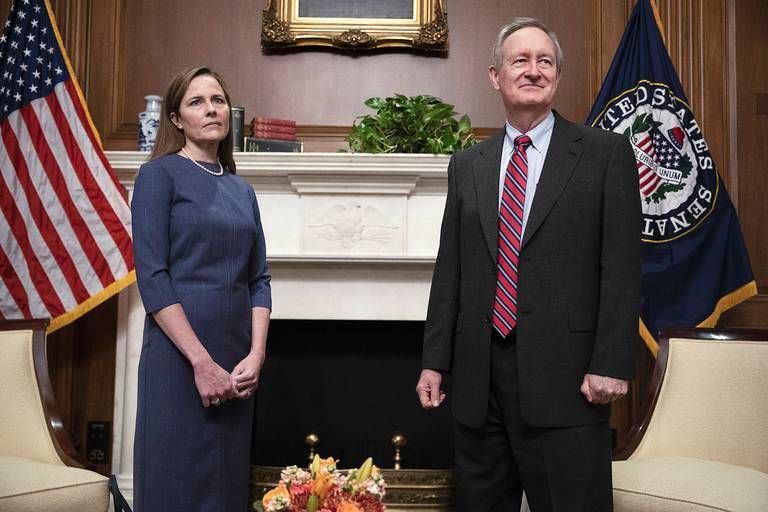 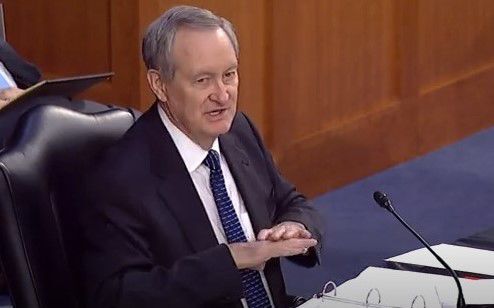 As Senate Judiciary Committee members gave their opening statements in Monday’s confirmation hearing on the nomination of Judge Amy Coney Barrett to the U.S. Supreme Court, Idaho’s member, GOP Sen. Mike Crapo, decried “the standard arguments” from Democrats against the nomination, and described Coney Barrett as “pre-eminently qualified” to serve on the nation’s highest court.

“Judges are not policy makers,” said Crapo, a Harvard-educated attorney, telling Coney Barrett, “I know you know that. Should we not take Judge Barrett at her word?”

“She understands the role of a fair and proper judge,” Crapo said, and if confirmed will be “the 5th woman and the first mother of school-age children to serve on the Supreme Court.” Crapo said, “In many ways she’s the ideal candidate to fill this current vacancy.”

He derided minority Democrats for suggesting Coney Barrett will be an “activist justice” who would undermine women’s rights, eliminate protections for Americans’ health care and make changes affecting any American with a pre-existing condition.

“She’s not. We all know that,” Crapo declared. “This is simply the tired, worn-out argument that is constantly made every time a Republican president nominates a candidate to the bench of the Supreme Court of the United States. It has never been true, and it will not be true with Judge Barrett.”

Crapo was immediately followed by Sen. Kamala Harris, D-Calif., the Democratic nominee for vice president. In her opening statement, Harris, speaking remotely, pointed to the upcoming Nov. 10 case regarding the Affordable Care Act that will come before the Supreme Court. That upcoming case, she said, is “a big reason why Senate Republicans are rushing this process.” She said Republicans have “finally realized that the Affordable Care Act is too popular to repeal in Congress,” and so are now trying to get the “court to do their dirty work.”

Crapo spent a fair portion of his opening on rebutting the Democrats’ arguments, including that the Senate is “rushing through these proceedings.”

Though Senate Republicans refused to hold hearings on former Democratic President Barack Obama’s high court nominee, Merrick Garland, that was made nearly a year before the 2016 presidential election, opting instead to leave the decision on the next justice to the next president after the election, Crapo said that’s because the presidency and the Senate were then controlled by two different political parties. Echoing earlier statements by Senate Majority Leader Mitch McConnell, Crapo contended that historically, divided governments don’t confirm a president’s election-year nominations, while those of the same party do.

Some legal scholars have disputed that, including judicial selection expert Russell Wheeler of the Brookings Institution, who wrote on Sept. 24 that McConnell was citing a “historical norm that doesn’t exist.”

Wheeler noted that all five election-year vacancies from the 1890s until the 1950s were during unified government, offering no test of whether divided government would have confirmed them; and the two most recent divided-government vacancies, in 1956 and 1988, both were filled.

Crapo said, “I have met several Supreme Court nominees in my service in the Senate. Throughout, I have continued to maintain that an emphasis on following the law and upholding our Constitution must be a central characteristic of the justices selected for this highly influential federal branch.”

He said he believes Coney Barrett’s record, including her extensive academic writings about legal matters, “demonstrates she is both intellectual and deliberative in her understanding of the law.”

As the hearing continues Tuesday and Wednesday, Crapo and other senators from both parties will have the opportunity to question Coney Barrett, who on Monday was accompanied at the hearing by multiple family members including several of her seven children.