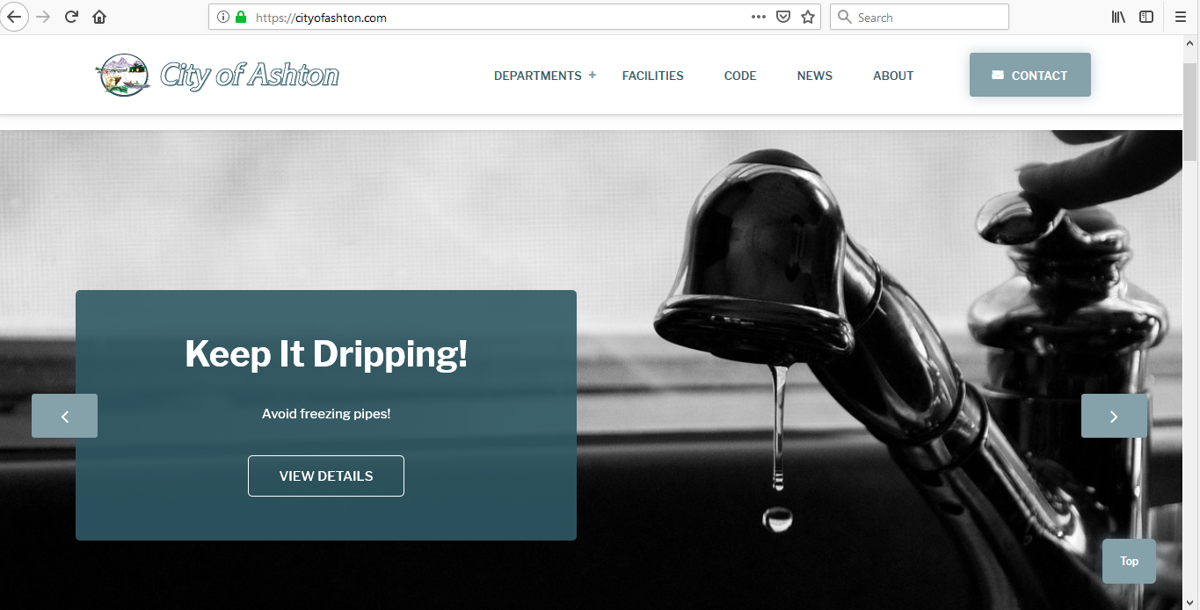 A screenshot of the homepage on the city of Ashton's updated website.

A screenshot of the homepage on the city of Ashton's updated website.

“We had both been talking that ‘It looks like it needs to be updated.'  We said, ‘We have some work to do,’” she said.

Amen said the webpage hadn’t been updated since 2005, when it was created.

“It needed to be done. It was definitely time for it,” he said.

Technology that wasn't available in 2005 helped Amen create a more polished and professional looking site. Amen started working on the changes in November.

“It probably took two weeks to transfer the old stuff, including the minutes that date back quite a ways,” he said.

Thanks to lots of new designs, Amen renovated the webpage, adding various pictures as well, bringing the site up to 2019 internet standards.

“I just worked with Cathy to make sure everybody was on board with what I’ve done. The public couldn’t see it until it was ready, and until everybody approved of it. They approved it, and we launched,” he said.

“After all that time, things get a little old and stale. In November, I upgraded it to a newer version. It improved the look and feel of the website,” he said. “There are some updated scenes. It has a nice animated feel to it. The slide show is beautiful. Things pop in and fly in.”

Among those things popping and flying in on the webpage, it includes a snazzy attention getting picture of a black and white dripping faucet. By clicking on its tab, residents can read how the city urges them to let a little bit of water drip from their faucets during the colder months.

The “Ashton, Idaho” landing page begins with pictures of the city’s iconic granaries set against a white and blue sky. By clicking on a tab there, another picture showcases Ashton’s Main Street and details about the city.

“The City of Ashton is a wonderful place to live or visit! One of the most outstanding natural resources of the City of Ashton is certainly the magnificent view that can be had of the Teton Mountains rising out of the gently rolling farmland to the southeast,” it writes.

The site also notes the spectacular views of the area’s forests formed by the volcanic calderas. Those calderas, it reports, define the Targhee National Forest boundary.

The webpage reports Ashton as being the “gateway” to Yellowstone National Park.

“The rugged and secluded nature of some of these entrances is the secret to keeping crowds low,” it writes.

The city’s site notes one of the more unique park entrances is through the Cave Falls/Bechler entrance on the southwest side of the park’s boundary.

“This is the only non-vehicular public access point to Yellowstone from Ashton,” it reported.

Travelers can also enter the park via Flag Ranch on Reclamation Road. It also noted that Teton National Park is a short distance from Flag Ranch and Jackson Hole.

The third slide on the page is entitled “Whistles and Smokes” providing pictures of trains and a story about Ashton’s beginnings. The late Jane Daniels, who once served as the archivist for Ashton Archives, wrote the article.

“It’s a really neat story, and the site allows us to highlight stuff like the history of trains and on how Ashton has been influenced,” he said.

In Daniels’ article, she details how the railroad helped create the city of Ashton. Of note, the city was named after an Oregon Short Line Railroad Chief Engineer, William Ashton.

“Naming a new railroad town after a railroad official was common, and the town of Ashton was named for William Ashton. Other local stations named for railroad men were Drummond, Eccles, and Ingling,” she said.

By 1904, the committee had purchased a combined 640 acres from George Harrigfeld, R.E. McGavin and Asa Hendricks. They also raised $15,000 to build a new school. In addition, they made building materials available for future Ashton residents' homes.

Two years later, the train arrived in Ashton that by then had been platted. On Valentine’s Day that year, residents held a dance party at the new Miller Brother’s Elevator.

Fast forward to July 4, and the city became an officially incorporated “village” of Fremont County.

Amen also noted a story by Jim Griffin where he told about Fremont County’s earliest settlers.

“He wrote about the influences of the mountain men back in those times. There’s some really neat stuff (in that story),” he said.

Griffin detailed how the legendary Andrew Henry guided his group up the Madison River where they eventually discovered what would eventually be named Henry’s Lake and Henry’s Fork.

“During the winter of 1810-1811, Andrew Henry and his men became the first white men to winter in the area. They camped at Conant Creek which is outside of what is now known as Ashton, Idaho,” Griffin reported.

The hope is that the website’s upgrades will draw more interest from current residents and potential visitors. Thanks to the changes, there is great potential for many other things to become a part of the city’s webpage, Amen said.

“The beauty of where we’re sitting - the sky is the limit because of the upgrade,” he said.

For more information on the city’s new webpage, visit https://cityofashton.com/