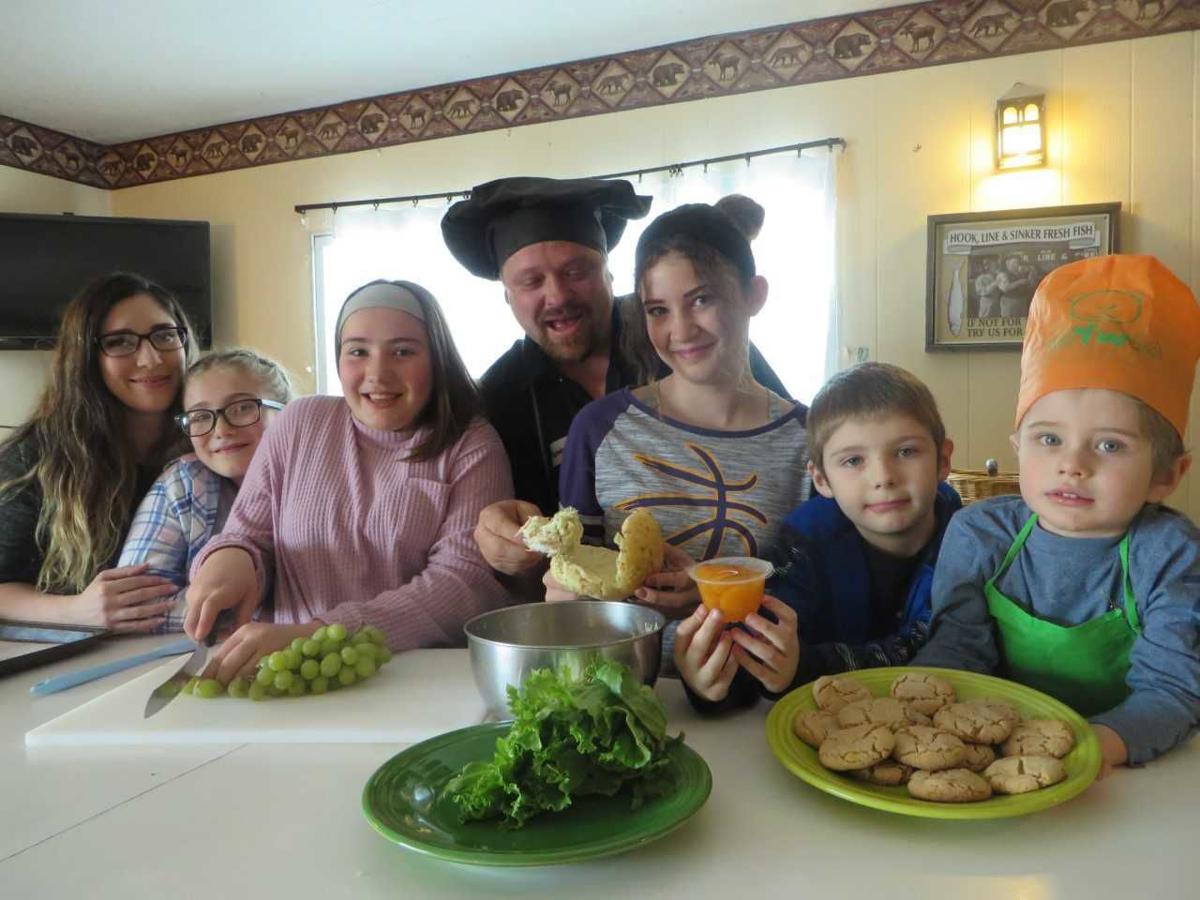 The family of Ryan and Christina Grigg all help out in the kitchen from time to time. Here they put together grandma’s chicken salad and show off some of mom’s home baked cookies. From left include mom Christina, Ashley, Sophia, Kaylyn, Jayden, Golden and dad Ryan in the back. The Chicken Salad recipe of Ryan’s mom, Coleen, was a favorite when she had her own catering business. Christina’s cookie recipe is also a family favorite. They have shared other favorite recipes in today’s Food Stuff. 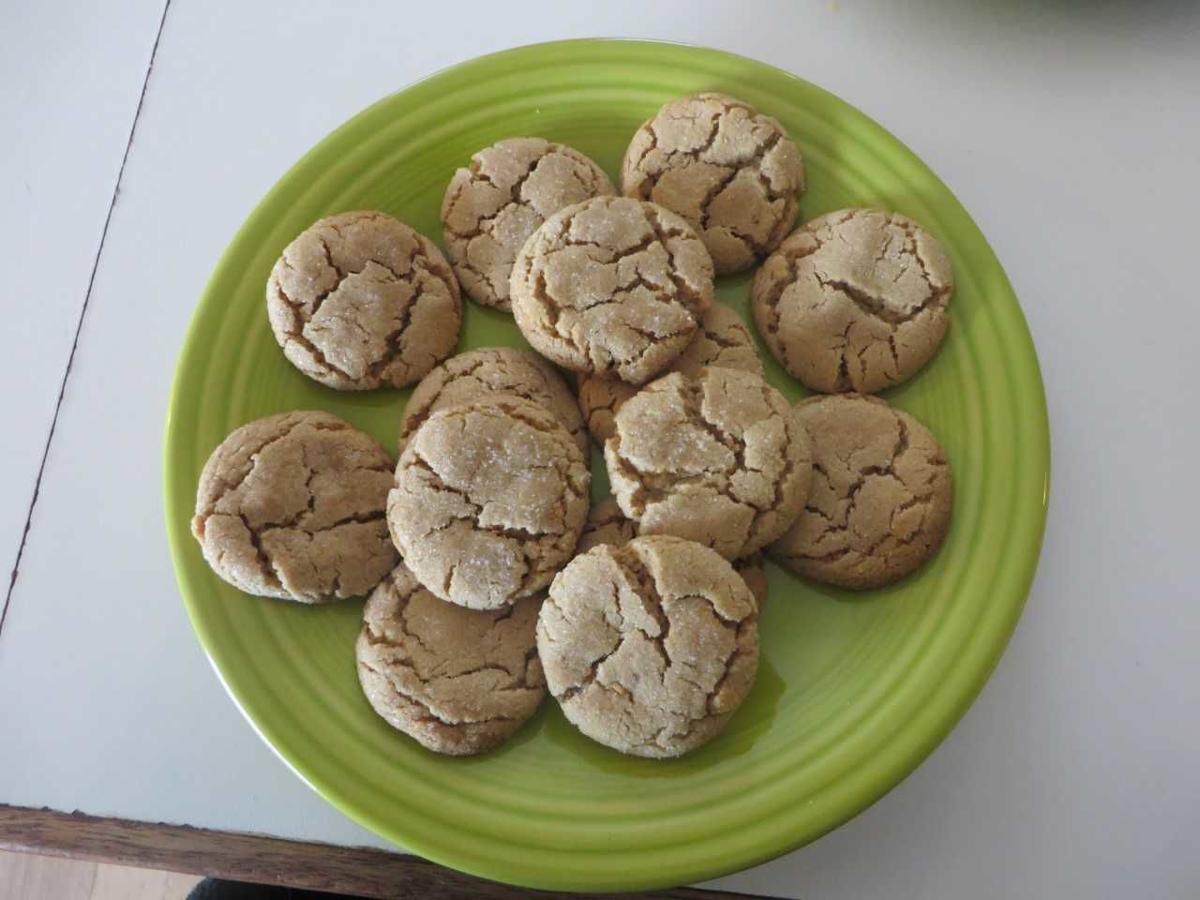 The family of Ryan and Christina Grigg all help out in the kitchen from time to time. Here they put together grandma’s chicken salad and show off some of mom’s home baked cookies. From left include mom Christina, Ashley, Sophia, Kaylyn, Jayden, Golden and dad Ryan in the back. The Chicken Salad recipe of Ryan’s mom, Coleen, was a favorite when she had her own catering business. Christina’s cookie recipe is also a family favorite. They have shared other favorite recipes in today’s Food Stuff.

Throughout life, we eat what is cooked for us and as we grow older, particular foods have more of a meaning than just something to eat.

Our featured cook today, Ryan Grigg, feels that when he cooks one of his mom’s recipes from her cookbook, it brings back many memories of her in the kitchen, cooking and the good times at home.

Ryan Grigg and wife, Christina live just east of St. Anthony, Idaho where they own and operate the Ashton Sunrise Café. Christina grew up in Salt Lake City, Utah, but came to Idaho and attended Sugar-Salem schools. Ryan was raised in many places as his dad, Gary, designed and built golf courses. That found the family living in New Mexico, Arizona, Kansas, Nevada and Florida.

In his youth, Ryan spent many summers in Idaho as he has ties to Rexburg. His mom, Coleen Brock Grigg, was raised there and her dad, Whitey Brock, was the mayor of Rexburg at one time. Ryan always loved the area and told himself that when he settled down, he wanted to raise his family in the place where he and Christina now live and is between St. Anthony and Ashton, Idaho.

The family of Ryan and Christina include Kaylyn who is 13, and attends North Fremont Junior High School. She enjoys art, camping, swimming, basketball and jumping on the trampoline. Her favorite food is French toast.

Sophia is 11, and attends Ashton Elementary and is in the fifth grade. Her favorite food is spaghetti. She enjoys math at school and likes to be outside swimming and jumping on the trampoline.

Crepes are Ashley’s favorite food. She is nine and attends Ashton Elementary and is in the fourth grade. Sledding, swimming, coloring and jumping on the trampoline are her favorite things to do.

Jayden is six and in Kindergarten. Pepperoni pizza is his favorite food. He likes art and especially repeating the “Pledge of Allegiance” at school. He likes being outside sledding, swimming in the pool, jumping on the trampoline and exploring nature.

Three year old Golden loves his toy kitchen and wants to be just like dad. He likes to cook and can crack an egg and never break the yolk. His favorite

food is pizza and bacon and eggs. He likes to stay at home with mom while the others are at school.

Sometime in March, a new addition will join the family and his name will be Sterling.

Ryan also has three other children, Tyler who is 19 and planning to attend ISU in the future. Two others include Arianna and Layla who live in Idaho Falls with their mom.

Ryan had always been interested in the food industry from the time he began washing dishes at age 15. His boss gladly paid for him to get extensive culinary training. This particular boss began his first restaurant business as EB’s, which is now a successful restaurant chain on the east coast. Ryan has had great training which some have included “five star” restaurants.

Adding to Ryan’s interest in the food industry, his mom, Coleen, had a catering business and he was always helping her with preparing and delivering foods.

In 2008, Ryan purchased the Fall River Café which he now operates as the Ashton Sunrise Café. He had also worked at the former Relay Station east of St. Anthony. He is open through April to December with breakfast and lunch from 7 am to 2 pm, except for Mondays and catering in-between. All foods are made from scratch and made to order. He is potentially working to open another location in Ennis, Montana.

Ryan’s favorite food would be craw fish while his wife, Christina, would choose fajitas. The favorite of the entire family would be chicken noodle soup. While Ryan does meal preparations most of the time, Christina is the baker of the family and bakes items for the restaurant.

Growing a garden is part of the family activities of the Grigg family. They raise raspberries, wild strawberries, pumpkins, radishes, bell peppers, peas, beans and squash. They also have daily chores of caring for ducks, chickens, turkeys, three dogs, one cat and a salamander. Many wild game have been seen from their dwelling such as wolves, bobcats, deer, moose, fox and they have a horned owl who nests by their home and produces little ones each year. They have not seen any elk as of yet close to their home.

For Ryan and Christina, they are both family oriented and like to spend as much time as possible with family; camping near water, fishing or playing a variety of sports.

Inasmuch as Ryan credits his mom with his love for cooking and foods, he has shared a few of her recipes from her own recipe book, as well as from him and Christina, in Food Stuff today.

These crepes are a customer favorite.

Heat a 12-inch frying pan to medium heat. Lightly butter pan. Beat all ingredients for 90 seconds or until smooth. Batter should lightly coat spoon. Pour 1/3 of the batter into pan. As cooking, roll the pan until excess batter has set around the edges. Cook for about 90 seconds and flip. Cook for another minute. Roll any fresh fruit in middle and top with whipped cream.

Preheat oven to 350 degrees. Beat all ingredients in order. Roll into one tablespoon balls and roll in the ½ cup sugar. Place two inches apart on ungreased cookie sheet. Bake for 10-12 minutes. Remove and cool.

This is without a doubt a Brock family favorite.

Mix and heat to a boil the water, milk, sugar, butter and salt. Let cool. Add into the mixture after cooled, the eggs, yeast, four cups of flour and stir

well. Then add another eight cups of flour and knead until the dough is soft. Let rise to double in size. Then beat down and let rise one more time before rolling out and cutting out rolls. Put into greased pan and let rise again until double. Bake in preheated 400 degree oven for 10-12 minutes.

Combine the soda, 1 teaspoon water and vanilla and set aside. Combine the sugar, water and corn syrup in a large sauce pan. Cook over medium heat, stirring occasionally, to 240 degrees on a candy thermometer. (Note, a small amount dropped in cold water should form a ball which flattens when removed from the water.) Immediately remove from the heat and stir in the soda mixture that you set aside. Thoroughly pour half the mixture onto each baking sheet that has been warmed, and quickly spread it evenly to about ¼-inch thick. When cooled, break into pieces.

Combine chicken, celery, lemon juice, onion and salt. Chill well. Add in the grapes, oranges and almonds to the mixture and mix. Serve on a bed of lettuce with additional orange slices as a garnish. For bigger groups, you would proportionally increase the amounts.