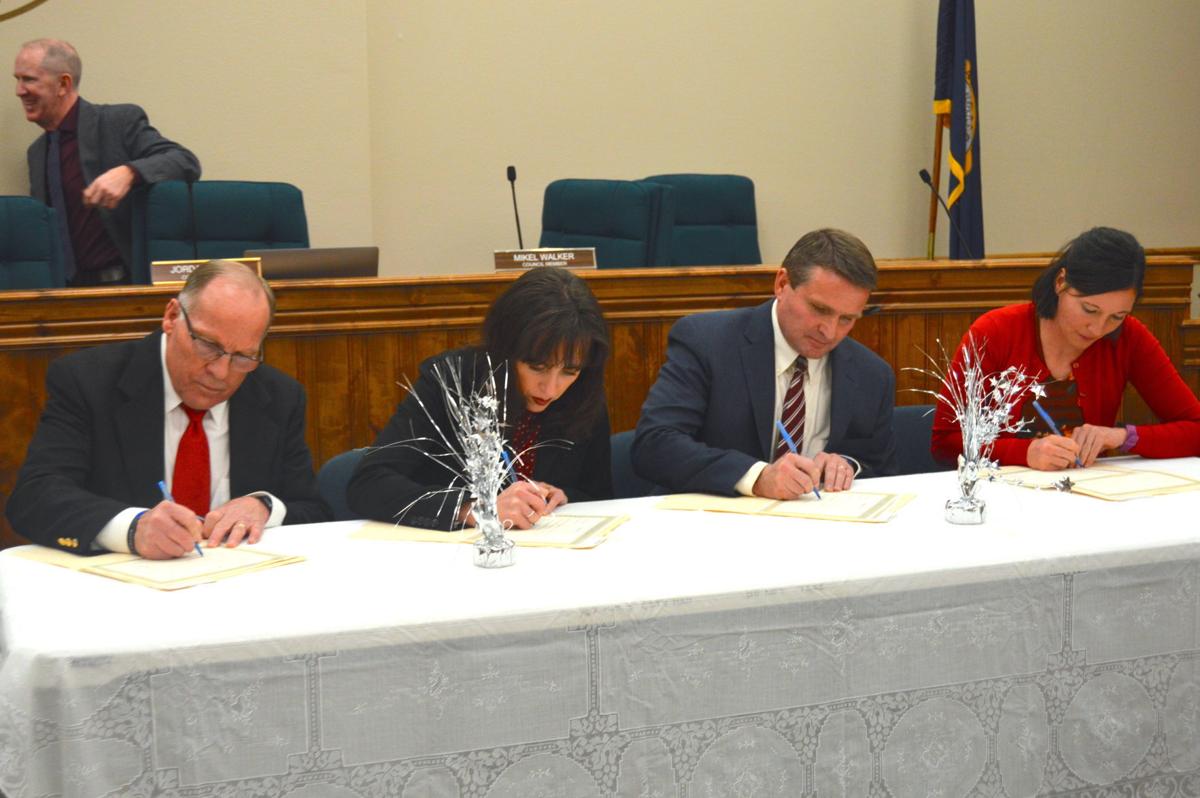 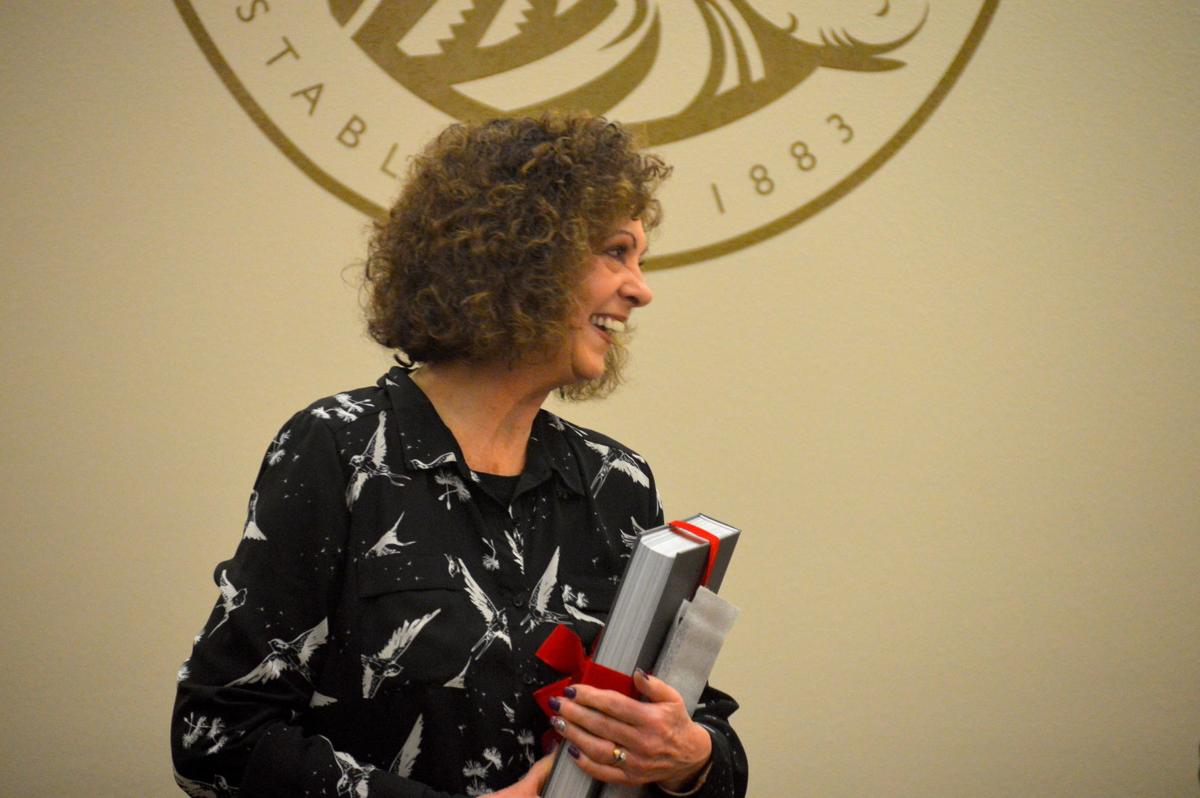 Council President Sally Smith saying goodbye to her seat on the council and beginning a new chapter in her life. 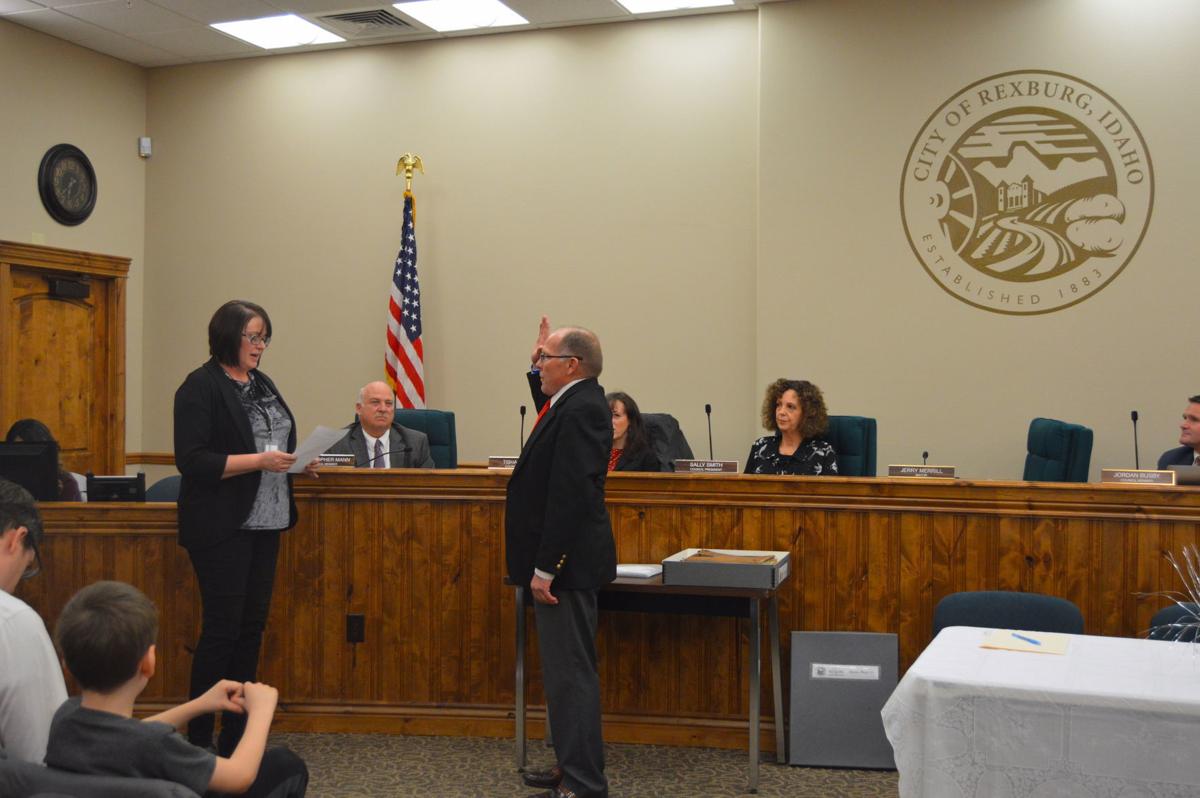 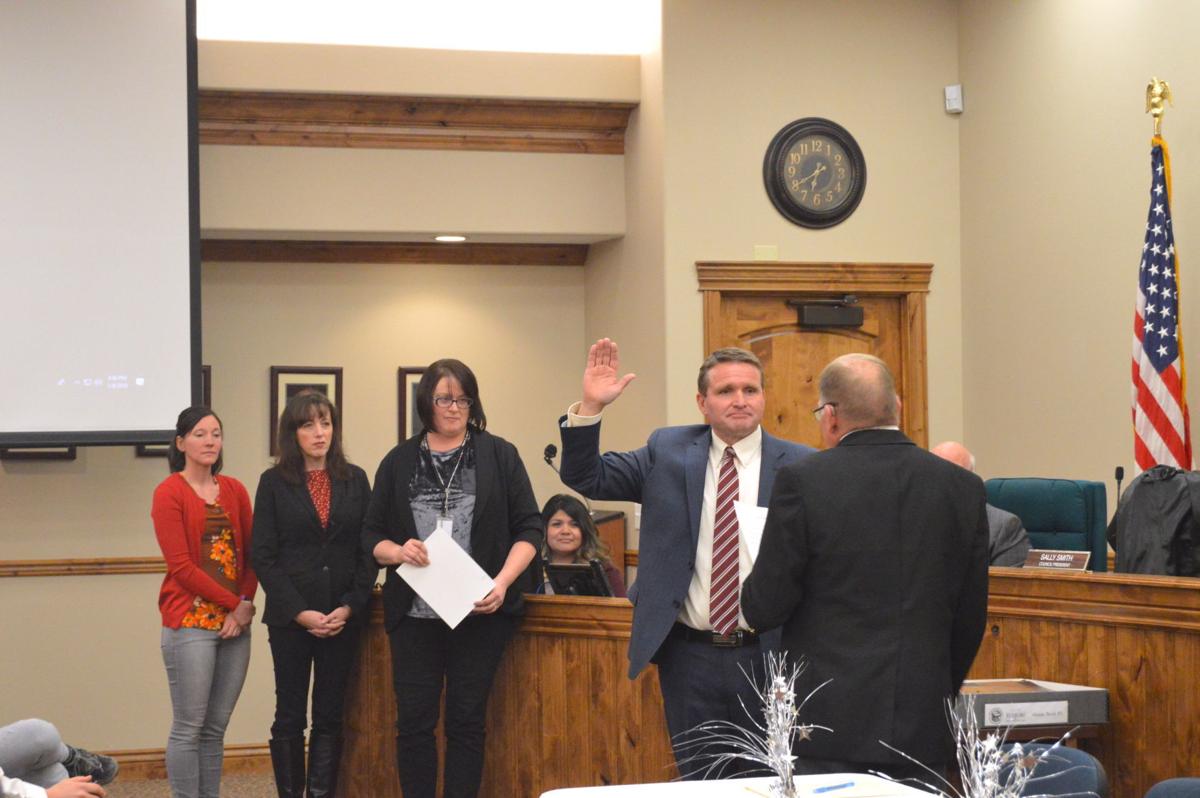 Jordan Busby was sworn-in to office once again for 2020 and was also elected city council president. 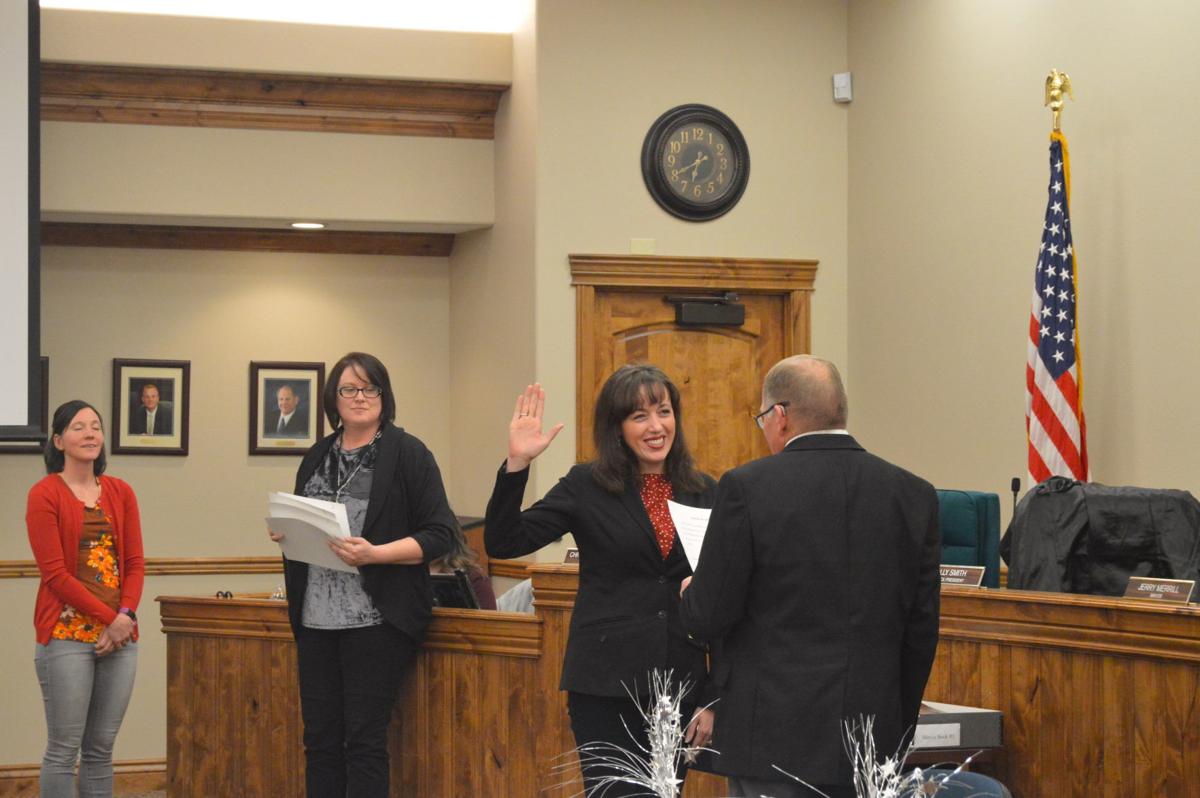 the swearing-in of Tisha Flora who was re-elected for another term in 2020. 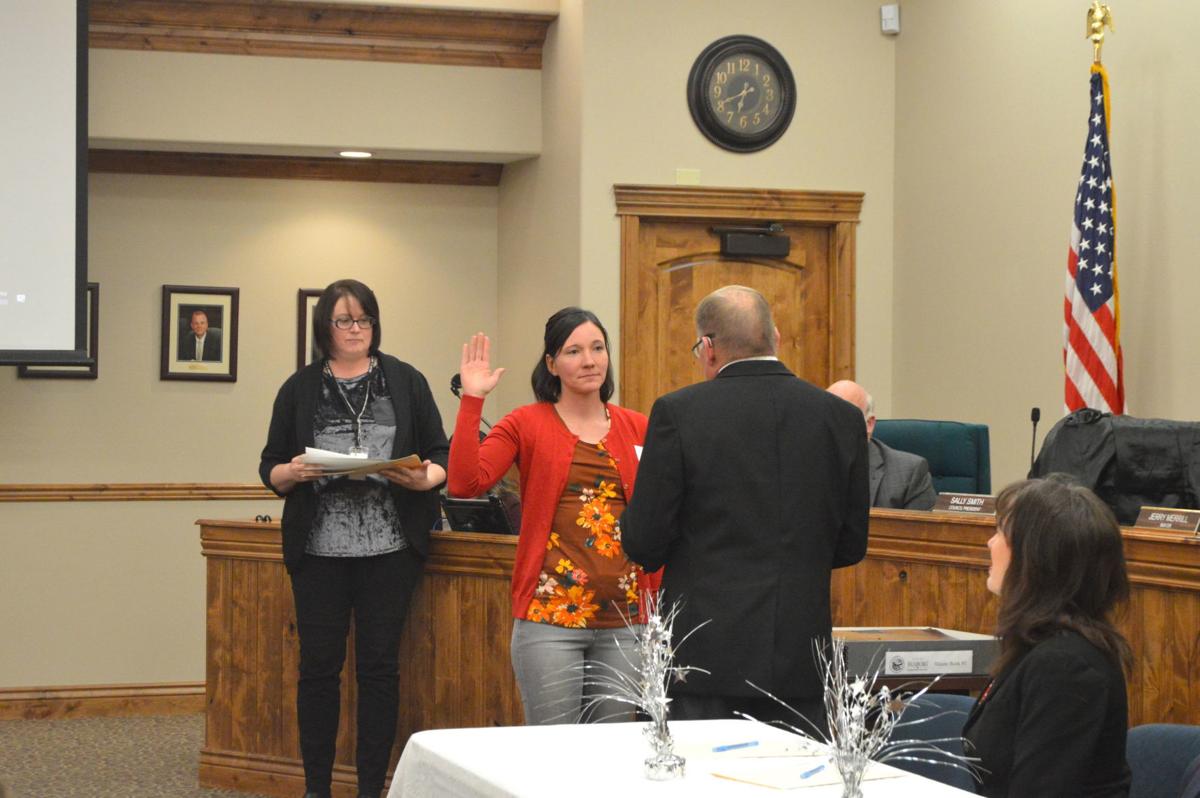 Council President Sally Smith saying goodbye to her seat on the council and beginning a new chapter in her life.

Jordan Busby was sworn-in to office once again for 2020 and was also elected city council president.

the swearing-in of Tisha Flora who was re-elected for another term in 2020.

REXBURG − Wednesday was Council President Sally Smith’s last day on the Rexburg City Council. Bryanna Johnson is the newest member of the council and will be taking Smith’s seat on the council. Johnson was sworn-in by re-elected Mayor Jerry Merrill. Councilwoman Tisha Flora was also sworn-in along with fellow Councilman Jordan Busby, who was named the new city council president.

Merrill started the meeting by thanking their family, friends, and city employees for attending the meeting. He said it was a big night for him and his fellow council members. The only one not in attendance was Councilman Brad Wolfe.

“Councilmember Wolfe actually was excused. He was called out of town suddenly on business,” Merrill said. “There was something he had to take care of and he expressed his sadness that he couldn’t be here with us tonight.”

Merrill then swore-in Councilwoman Flora and Johnson as well as Councilman Busby. Merrill and the new councilmembers then signed certificates of election in front of the audience at the council meeting.

When asked about how she felt being on the other side of the bench, Johnson said it was a little bit scary but also quite exciting.

Johnson said she was thankful to those who voted for her.

“I’m really thankful for the opportunity that they’ve given me,” she said. “And I still have a list of all the suggestions they gave me and I’m just really excited to work on all the things that they’d like to see happen in Rexburg.”

When asked about what she’d like to focus on in 2020, Johnson said she was working on a newsletter for citizens.

“One thing that I’d really like to see, that I’ve been talking to the mayor about already, is just to have a city newsletter to keep the citizens more informed,” Johnson said. “And I’m over the trails committee right now so I’m excited to see what we can do with the trails.”

Later in the meeting, Smith was given a book about American national parks, a plaque for her 8 years of service on the council, an above and beyond award, and a gift certificate to a local restaurant.

Smith is a life-long Rexburg resident and had an interest in city government from a young age and her ancestors were some of the first to settle in the Rexburg area.

“My mother was the first woman to be elected to the city council in the 1960s,” Smith said in a previous interview. “I’ve always had an interest in city government. I really, really love our city and want to do anything I can to help.”

Members took the time to talk about Smith and honored her time on the council.

“We’d like to ask sally smith to come down here, we want to thank her for her dedicated service to the City of Rexburg for the last eight years,” Merrill said. “Sally and I were elected at the same time, we’ve been working together for a long time and it’s been a pleasure. She grew up here in Rexburg and she has worked here, been involved in a lot of volunteer boards and commissions.”

Councilman Christopher Mann said Smith has been his closest friend since he moved to Rexburg 38 years ago.

“She has worked hard for the citizens of Rexburg and I appreciate (her) example,” he said. “And I’m gonna miss ya.”

Johnson is replacing Smith and expressed her gratitude.

“I haven’t been serving with Sally but I have been coming to city council for quite a while so I got to watch her,” Johnson said. “I’m thankful for her example and that I’ll get to keep learning from here as I take her place.”

Councilman Busby has taken over the title of council president. He spoke of her skill in organizing events and her leadership within the council and on boards such as the Rexburg Flight Museum board.

“Well Sally, I echo everything has been said,” Busby said. “I’ve had the opportunity to cook at those fly-ins and I can tell you they are organized because if I put too much batter or too much of something (else) I’m told. But I have loved the opportunity to serve with you and I’ve learned from you. I appreciate the ride alongs that we went to every year and you were in charge of those so thank you for all that you have done.”

Smith said the city hasn’t seen the last of her. Smith plans to stay involved in city affairs and hopes to have a seat on the city Planning and Zoning Commission if they’ll have her.