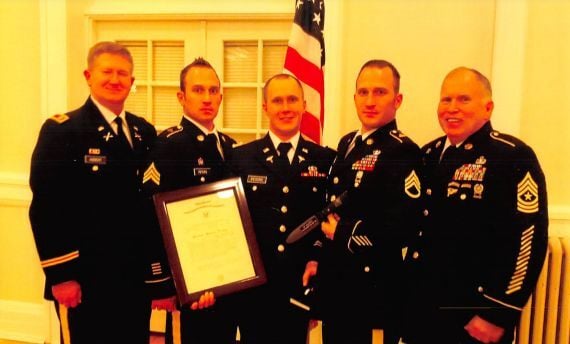 Sgt. Peters (far right) is pictured with three of his four boys and his brother-in-law at ISU at his son’s commissioning as a second lieutenant in nursing. 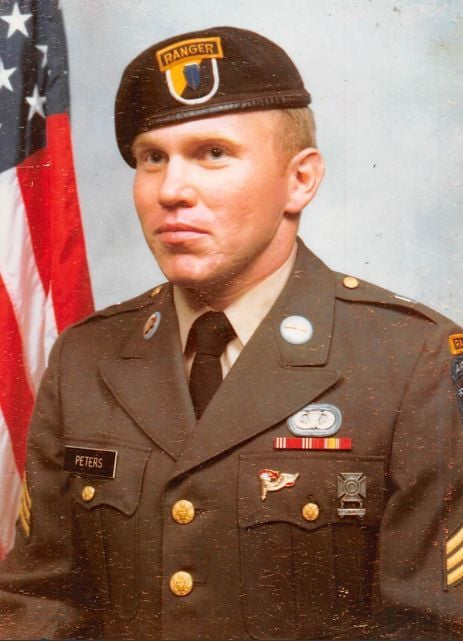 Sgt. Peters (far right) is pictured with three of his four boys and his brother-in-law at ISU at his son’s commissioning as a second lieutenant in nursing.

Growing up just outside of Pittsburg, Pennsylvania, Steve Peters had about every Army toy imaginable — the tanks, the soldiers, the canons. the guns and the helmets. When he wasn’t pretending he was in the Army, he was watching combat and war movies.

His father served in the Army during World War II, even going ashore on D-Day and serving in the well-known Red Ball Express Unit that ran supplies from Normandy.

“There was no doubt what I wanted to do. The Army was what it was all about. I always wanted to be in the Army,” Peters said.

So, 10 days after graduation from East Allegheny High School near Wilmerding, Pennsylvania, he enlisted in the Army and was on his way to Basic Training at Fort Polk, Louisiana.

“The recruiter said, ‘You scored high on the test and can do anything you want.’ I wanted the infantry. That was what the Army was to me,” he said.

Peters joined in May 1974, just after Vietnam. They trained at Fort Polk because the temperature and terrain were the closest to that in Vietnam, he said.

He volunteered for Ranger training in Fort Benning, Georgia. That also involved joining the airborne and becoming a paratrooper. For a few weeks he was assigned to Fort Lewis, Washington, and then he came an instructor at the Ranger school at Fort Benning. The remainder of his service in active duty was at Eglin Air Force Base in Florida. He got out of active duty in 1979 to attend college in Rexburg.

He immediately joined the Army Reserves in Rexburg in the 539 Signal Company. While at a health club, he overheard someone talking about the airborne and jumping out of planes.

“Oh, I miss that,” Peters said and went to talk to the man, who he found out was in the Special Forces Green Berets in the National Guard down in Utah.

“So, I became a Green Beret,” he said. “It took me a year and a half. I spent 28 years down in Utah with the National Guard. I was an engineer and a team leader for an A-team as team sergeant. I stayed until I was too old to run with the pack.”

In that 28-year stretch, he went to 12 different countries, including Thailand, India, Germany, the Maldives, Scotland and Denmark and was deployed three times. The first deployment was from 2002-2003 to Kuwait.

“That was when the U.S. went to Iraq the second time,” he said.

“There was an Al-Qaeda training camp in one of the outer islands. That was a combat zone,” Peters said.

In 2011-2012 he deployed to Djibouti, Africa. Special Forces were conducting operations in the area on the border with Somalia and assisted with pirate problems.

In August 2016, he wanted to extend, but it was mandatory retirement at age 60.

“So I did 42 ½ years in my country’s uniform, and I loved every minute of it,” he said. ‘I don’t regret it at all. I can’t think of anything I would change.”

When he first came to Rexburg, he met his wife JoAnn, and she was excited about the prospects of traveling with the Army. But Peters wanted to raise his children without a lot of moving, so he stayed in the Reserve component. While Peters was on leave from Djibouti, JoAnn did join him for a safari in Kenya.

“She loved it. She loves animals. She had a great time,” he said.

They have five children, four of them boys. All four boys joined the Army and three have stayed with it. All four of the boys have also become paratroopers.

“So, three generations in the Army,” Peters said. “Sugar City has a park with a stone monument, and all five of our names are on it,” he said.

One time, he and his four sons went down to Camp Williams in Utah and got in the same group — called stick — to do a jump. In the plane, they were calling roll and kept yelling “Peters!”

“Which one?” They yelled back.

After calling their last name for the third time, he finally asked how many Peters were there.

He likes parachuting for the thrill-seeking of it all.

“Don’t get me wrong, my stomach was up in my throat each time I had to jump. I’m scared to death of it. But I’m going to do it,” he said. “A lot of times we went off the tailgate. There’s lots of noise and turbulence. Then you step out, and it’s just dead silence and you drifting through the air. You enjoy the scenery for a couple of minutes and then prepare to land. In the sky sometimes you circle around and enjoy the challenge of controlling the chute and the landing. Once you hit the ground, again you’re a foot soldier.”

A lot of times on his weekend drills, he felt he was getting paid to go camping, something he thoroughly enjoys. In winter, they did cross country skiing and stayed in snow caves and did maneuvers, he said.

He’s told his sons and others that joining the Army is a good way to get college paid for with a lot of other benefits, like seeing the world.

So basically he “played Army” his whole life and loved it, he said.