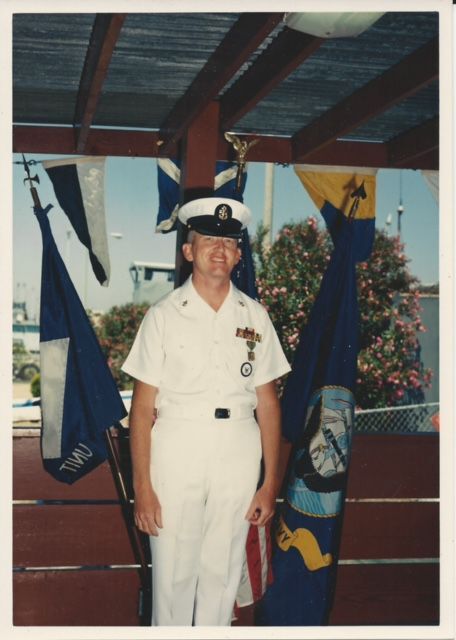 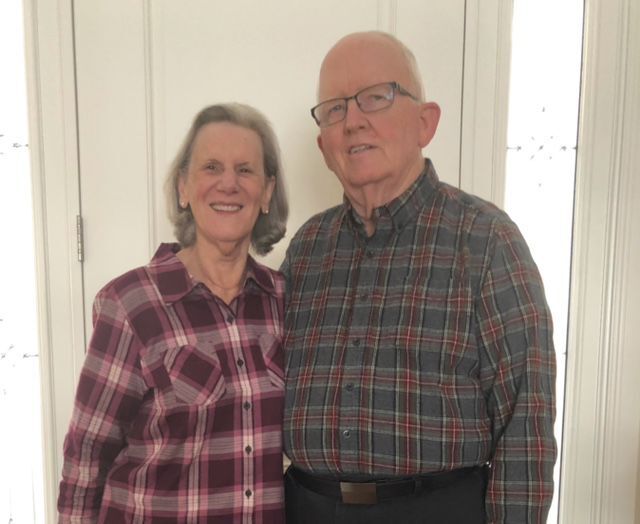 “My father served in the Navy in WWII. My uncle and great uncle were in the Navy. I had a great-grandfather in the Navy during the Civil War, so there’s some tradition there,” he said.

He was born in 1942 in Los Angeles. His family moved to Long Beach when he was about 10. His father worked for Douglas Aircraft. He graduated from high school in 1960.

“In the 1960s the draft was a big issue. I belong to the Church of Jesus Christ of Latter-day Saints, and I wanted to serve a mission,” he said. Although he was in the Army Reserve Officers’ Training Corps during high school, he didn’t want to be drafted into the Army or serve in the infantry.

He joined the Naval Reserve in 1960 and attended meetings for a year while attending Long Beach City College. When he received his call to serve a 2 ½ year mission to Brazil, the Navy placed him in the inactive reserve. Upon his return from his mission in 1964, he was placed on active duty.

“I hadn’t initially considered the Navy as a career, but I advanced well and re-enlisted in 1966. I ended up completing 22 years of active duty with the Navy,” he said.

His first assignment was to the U.S.S. Waldo County (LST-1163), an amphibious ship homeported in Little Creek, Virginia, that was deployed to the Mediterranean at the time he reported in 1964. The following year he deployed to a minor crisis in the Dominican Republic.

In November or December of 1965, the Navy was looking for some volunteers to staff ships being called up from the reserve fleet to support the United States war effort in Vietnam.

He was assigned to a shallow draft ship able to navigate rivers. Rail helped to move supplies to troops.

“With a couple of exceptions, it was pretty quiet,” he said. “We were always in and out of where something exciting had just happened. We’d count our blessings that we missed that one.”

Their ship did come under fire once. Rail was working below deck. “The entire crew qualified for the Navy Combat Action ribbon because of that event,” he said.

“It’s not like the guys with the Purple Hearts who qualified with their blood. No one got wounded,” he said.

In 1967-69, his career took him to shore duty in Boston, Massachusetts. By this time, he was married, and his oldest daughter was born there.

In 1969-71, he was on the aircraft carrier the U.S.S. Ranger (CVA-61) homeported out of Alameda, California. They deployed to the Western Pacific at least twice. From its assigned station off the coast of Vietnam, the planes from the USS Ranger carried out bombing missions against North Vietnam and provided close aerial support for allied ground troops. While on the Ranger, he worked as a career counselor, encouraging enlisted crew members to remain in the Navy. For those who elected not to remain in the Navy, he encouraged them to take advantage of educational opportunities that would facilitate their transition to civilian life through veterans’ programs. It was during this time that his second daughter was born.

He next spent a year and a half in Guantanamo Bay, Cuba, assigned to the Naval supply center there. His assignment was in the budget and fiscal department of the comptroller’s office. His third daughter was born while serving there.

He next received orders to serve in Turkey, but first, he had to attend a language school in Monterey, California, to learn the language and culture. In Turkey, he was part of a small staff assigned to help provide support for the partially United States-funded Turkish Navy’s shipbuilding program.

“Part of my responsibility was to monitor the parts and supplies requisitions placed by the Turkish Navy to ensure that items they ordered were not on a list of materials that were unauthorized for security reasons,” he said.

A son was born in Turkey. He served in Turkey for three years. He returned to serve on the staff at the Navy and Marine Corps ROTC unit at the University of Idaho in Moscow where his youngest son was born. He again worked in logistics for the ROTC program, providing uniforms, books, supplies and ammunition for the students to practice.

After three years it was back to sea. This assignment from 1980-84 was on the staff of an amphibious squadron commander stationed in San Diego, California. He was back to working as a Navy counselor focused on retention. His work involved providing support to and conducting inspections of subordinate units within the squadron.

“Civilians would call it an audit. I would review their programs and report back,” he said.

The squadron experienced multiple deployments to the Western Pacific and the Indian Ocean. A sampling of short port visits during those deployments includes Sydney and Perth, Australia; Sasebo, Japan; Subic Bay, Philippines; and Kaohsiung, Taiwan. There was always an outbound and inbound stop in Pearl Harbor, Hawaii.

About these port visits, he said, “I saw a lot of things I wouldn’t have otherwise.”

Over the course of his service in Idaho and the subsequent deployments, he used his off-duty time to complete his Bachelor of Arts degree in business administration through the off-campus degree program offered by Upper Iowa University in Fayette, Iowa.

His next assignment was a shore duty assignment to the staff of Commander Naval Beach Group One situated at the Naval Amphibious Base at Coronado, California, and continued to involve retention. Though not personally involved, Rail took great interest in the activities of fellow staff members who were actively engaged in the development, and placing into active service, of the air cushion vehicles the Navy now uses to more safely transport troops from ships at sea to the beach. While serving at Coronado, he enrolled in evening classes at National University and earned a Master of Science degree in education with an administrative emphasis.

“My Navy career ended there in 1986,” he said. His retirement from the Navy provided some challenges, as he experienced several major stressful, life-impacting events, including divorce, geographic relocation and unemployment.

It took a year to obtain full-time employment. During that year he had a variety of temporary jobs, not infrequently as a substitute teacher. Full-time employment and remarriage to a music teacher and present wife, Paula, occurred within the same week at the end of that year.

He later attended the University of California, Riverside, where he completed two credential programs authorizing him to serve as a teacher for grades K-12 and to serve as a learning handicapped specialist, and then he added bilingual credentials.

Rail retired from teaching in 2004, and his wife retired in 2007 after 30 years of teaching. Once retired, the two of them served their first mission as an office couple in the Connecticut Hartford Mission of the LDS church from 2007-2009. Subsequent missionary service includes service from home as church service missionaries with Family Search until 2013, a year as church service missionaries with the Brigham Young University-Idaho Pathway program, and another full-time mission with the California Redlands Mission from 2014-2015 where they were assigned to labor with a young single adult ward.

Although they had long wanted to leave California, their responsibility to care for aging parents kept them in Southern California for a time. With the passing of those parents, they were able to make the move to Rexburg in the fall of 2015.

“We have wonderful neighbors, and we love the community,” Rail said. “We have opportunities to serve in the temple and at the Family History Center. I’m involved with the VFW Post here in Rexburg and also serve as the state president for the Idaho Society of the Sons of the American Revolution. Rexburg is a nice place to be.”

When asked about his feelings about his military service, he expressed gratitude for the opportunity he had to serve his country and to have become acquainted with many cultures in the course of his military travels throughout the world.

“It was great to contribute to the preservation of the principles upon which our country was founded,” he said.